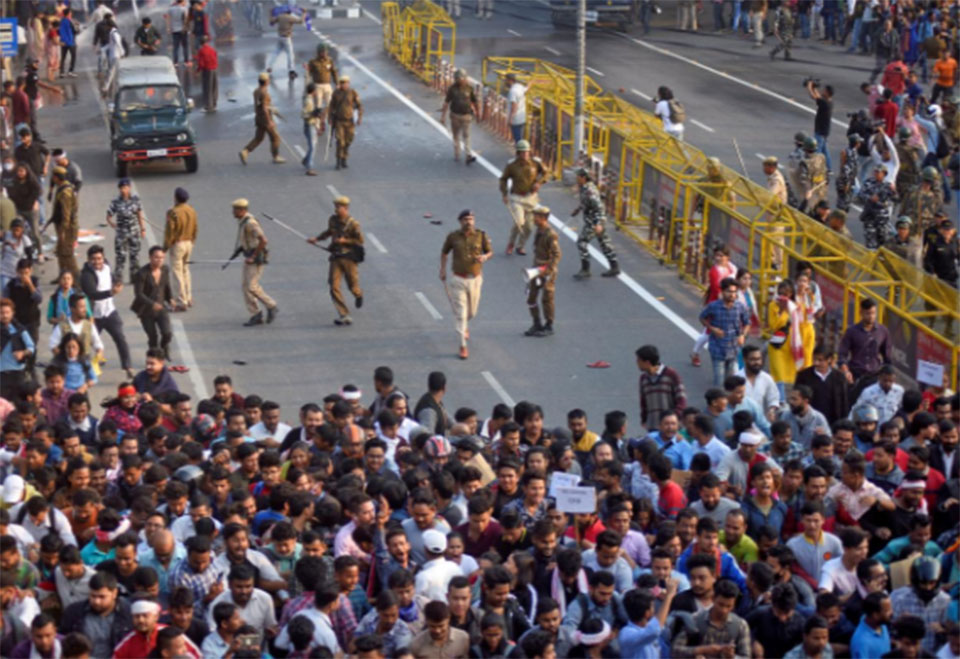 GUWAHATI, India, Dec 12: India moved thousands of troops into the northeastern state of Assam on Thursday after violent protests overnight against a new law that would make it easier for non-Muslim minorities from some neighboring countries to seek Indian citizenship.

Prime Minister Narendra Modi’s Hindu nationalist government has said the so-called Citizenship Amendment Bill that was approved by parliament on Wednesday was meant to protect besieged minorities from Bangladesh, Pakistan and Afghanistan.

Critics say it undermines the country’s secular constitution by not offering protection to Muslims while others argue it will open India’s northern states to a flood of foreigners.

Resistance to the bill has been the strongest in the tea-growing Assam state, where a movement against illegal immigrants from its neighboring Bangladesh has simmered for decades.

Troops were moved in from other parts of India, including the troubled Himalayan region of Kashmir, state officials said, restoring calm to Assam’s capital Guwahati, although protesters were back on the streets in other parts such as Morigaon, where they burnt tires.

Mobile internet has been suspended in 10 districts in Assam for 24 hours until 7 pm Thursday, the government said in an order, adding that social media platforms could potentially be used to “inflame passions and thus exacerbate the law and order situation.”

The turmoil in Assam comes just days ahead of an annual summit that Modi plans to host for Japanese Prime Minister Shinzo Abe there as part of his campaign to move high-profile diplomatic events outside Delhi to different parts of India, to showcase its diversity.

Protesters attacked the homes of Assam Chief Minister Sarbananda Sonowal and other members of the ruling Bharatiya Janata Party overnight, blaming them for playing politics with a region with a history of ethnic and religious tensions and by opening the floodgates to more outsiders.

“This a spontaneous public outburst,” said Nehal Jain, a masters student in communications in Guwahati. “First they tell us there are too many illegal immigrants and we need to get rid of them. Then they bring in this law that would allow citizenship to immigrants,” she said.

Of key concern is the legislation’s new citizenship path for six religious groups including Hindus, Christians and Buddhists, but not Muslims, critics said.

“It is a political signal of a terrible narrowing, a chilling exclusion, directed at India’s own largest minority. India is to be redefined as the natural home of Hindus, it says to India’s Muslims. And that they must, therefore, be content with a less natural citizenship.”

The government has said the new law will be followed by a citizenship register that means Muslims must prove they were original residents of India and not refugees from these three countries, potentially rendering some of them stateless.

Members of other faiths listed in the new law, by contrast, have a clear path to citizenship.

KATHMANDU, Dec 11: Amid concerns that hundreds of thousands of people, including those of Nepali origin, living in north-eastern India... Read More...

GUWAHATI, INDIA, Aug 31: Nearly 2 million people have been left off a list of citizens released on Saturday in India’s... Read More...