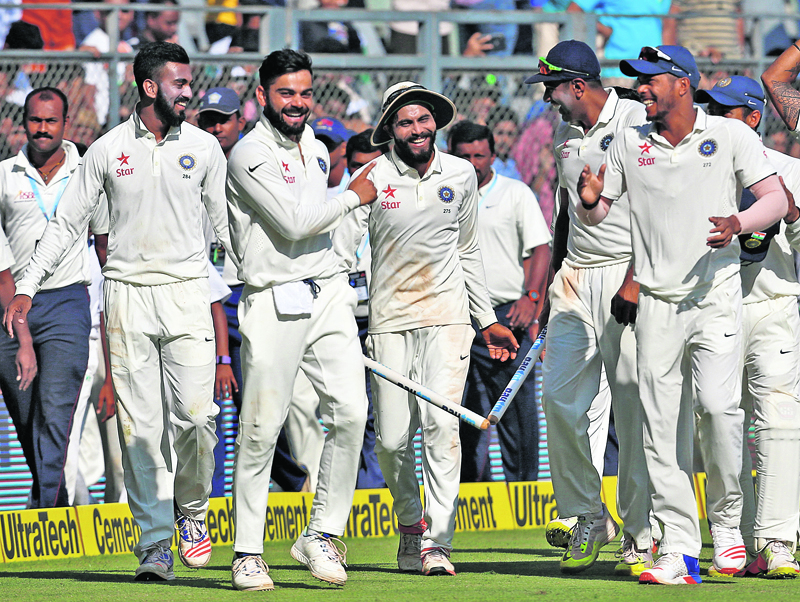 MUMBAI, Dec 12: Ravichandran Ashwin tore through England’s lower order in just half-an-hour on Monday as India won the fourth Test by an innings and 36 runs, clinching the series 3-0 with a game to spare.

England started the final day at the Wankhede Stadium trailing by 49 runs with four wickets remaining, and needing something extraordinary to avoid defeat.

But off-spinner Ashwin grabbed all four wickets to send England crashing to 195 all out and finish with figures of 6-55 in the innings, and 12 scalps in the match.

Skipper Virat Kohli was named man of the match for his brilliant double century in a crushing win that confirms India as Test cricket’s top side and avenges their two consecutive series defeats to England.

“This series win is probably the sweetest we have had in the last 14-15 months,” said Kohli, who took over from Mahendra Singh Dhoni as Test captain last year.
England captain Alastair Cook, who has hinted he may step down after the series, admitted it was a mistake to pick only two specialist spinners in Mumbai’s spin-friendly conditions.

“We would have liked another spinner but we had the opportunity to bowl India out for 400 and we did not take them,” said Cook.

Ashwin first dispatched Jonny Bairstow, who could only add one run to his overnight half-century, before clean-bowling Chris Woakes for nought.

Adil Rashid was then caught in the deep by Lokesh Rahul for two, off Ashwin’s bowling, to put England at 193 with just one wicket remaining.

James Anderson was then caught to become Ashwin’s sixth victim of the innings as England were all out for 195, failing to make India bat again.

England posted 400 in their first innings before India put on a massive 631, including Kohli’s double century and tons for Murali Vijay and Jayant Yadav.

Kohli struck 235 runs for his third double century of the year, while Yadav’s 104 marked his maiden Test hundred.

England were already up against it going into the second innings and they slumped to 182-6 by the end of day four.

Opener Keaton Jennings was out for a golden duck while Cook could only make 18 as England’s batsman failed to cope with India’s spin attack.

As well as Ashwin’s 6-55, Ravindra Jadeja grabbed 2-63 as Kohli’s side humbled the visitors.

Kohli said Ashwin, who is the top-ranked bowler in world cricket, had once again proved to be a class apart.

“We are running out of words to describe his performances,” said the Indian skipper.
“Where we stand today -- 50 to 60 percent of that is Ashwin’s effort... The batsmen are playing second fiddle to that.”

Cook also paid tribute to Kohli’s batting, saying his Indian counterpart had led from the front and was in the form of his life.

VISAKHAPATNAM, India, Nov 17:  India won the toss on Thursday and opted to bat in the second test against England. ... Read More...