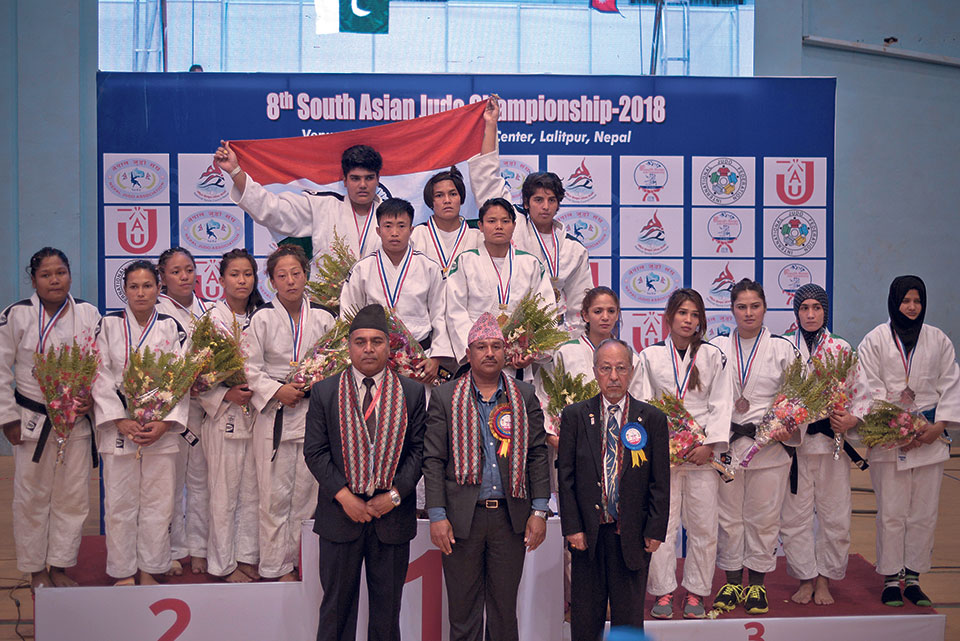 Team players of India (center), Nepal (left) and Pakistan pose with their medals on the podium at the end of their women’s team event final during the 8th South Asian Judo Championship at the Army Physical Training and Sports Center in Lalitpur on Monday. Photo: Bijay Gajmer

From the Nepali side, Manita Shrestha was the only player to score a wazari point in the game. She was leading the bout but in the end she was pinned down by her Indian opponent Chanu.
Likewise, gold medalist of South Asian Games Khatri was also pinned down by Huidrom.
Pakistan secured bronze defeating Bangladesh 4-1.

Also, India won the team events in the men’s category on the same day.

Indian men’s team defeated Pakistan in the final 3-2 to clinch the gold.

India then took an unassailable 3-1 lead after Jobandeep Singh beat Qaisar Khan. Shah Hussain Shah secured a consolation win for Pakistan to settle for a respectable score of 3-2 by defeating Udayvir Singh.

Earlier in individual events, India had secured 10 gold medals. Among India’s 10 golds, its women players made a clean sweep of all seven golds while only three men won gold medals.
Nepal and Pakistan had secured two golds each during the three-day event.

Likewise, Sri Lanka will host the junior and cadet championship in 2019.

The host Nepal, Bangladesh, Bhutan, India, Pakistan and Sri Lanka took part in the tournament, while the Maldives did not participate this time.  A total of 102 players fought for seven golds, seven silvers and 14 bronzes in men’s and women’s individual categories each, while they contested for one gold, one silver and two bronzes in the men’s and women’s team events each.

KATHMANDU, August 26: Nepal U-15 side will face India in the final as it swept aside Bangladesh in the semifinal of... Read More...