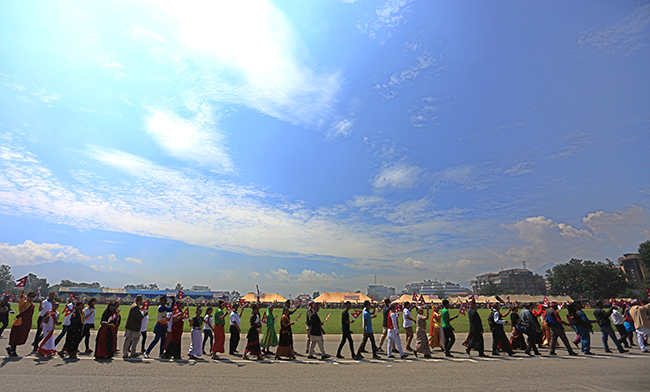 KATHMANDU, Sept 21: Major countries including the US, India, China and France have sent messages of congratulations to Nepal on the occasion of Nepal’s National Day, which also marks the fourth anniversary of the promulgation of the new constitution in Nepal.

In his message to President Bidya Bhandari, Indian President Kovind congratulated Nepali people on the occasion of Nepal’s National Day. “On behalf of the Government, the people of India and on my own behalf, I have the pleasure to extend warm greetings and felicitations to Your Excellency and to the people of Nepal on the occasion of your National Day,” read the message sent by President Kovind.

While expressing his thanks for the invitation to visit Nepal, President Kovind said he looks forward to visiting Nepal at a mutually convenient time. “I would like to take this opportunity to thank you for your gracious invitation to me and my wife to visit your beautiful country. Regular exchange of visits at the highest levels between our two countries demonstrates the priority that we attach to our close partnership,” he said in the message.

The message, however, does not make any reference to the Constitution Day. This many in Nepal have even described as ‘status quoist’ India’s position on Nepal’s constitution as New Delhi had only ‘noted’ the promulgation of new constitution in Nepal.

Interestingly, the message sent by Chinese President Xi also does not make any reference to the Constitution Day even as China earlier welcomed the promulgation of the constitution in 2015. “On the occasion of the National Day of Nepal, I would like to extend, on behalf of the Chinese government and people and in my own name, my warm congratulations and best wishes to you,” read the message.

Xi also recalled the visit of President Bhandari to China in April, injecting new impetus into bilateral relations and exchange and cooperation in various areas. “I am ready to work together with you to deepen China-Nepal comprehensive cooperative partnership featuring ever-lasting friendship for the benefits of the two countries and their people,” read the message.

Separately, US Secretary of State Michael Pompeo extended best wishes to Nepal on Constitution Day. “On behalf of the government of the United States and the American people, I offer my best wishes to the People of Nepal on your Constitution Day,” it said, while pledging support to Nepal’s continued development as a stable, prosperous and sovereign nation.

President of the Swiss Confederation Ueli Maurer has also sent a message of greetings to the people of Nepal on the occasion of National Day. “On behalf of the Swiss Federal Council and the people of Switzerland, it gives me great pleasure to send you and your country’s citizen our best wishes on your Sambhidhaan Diwas. I would like to take this opportunity to wish a bright and promising future – for you in your official role as well as for your country and its residents,” read the message.

KATHMANDU, Sept 17: The Federal Socialist Forum Nepal (FSFN) has made it clear it has not taken any decision to... Read More...