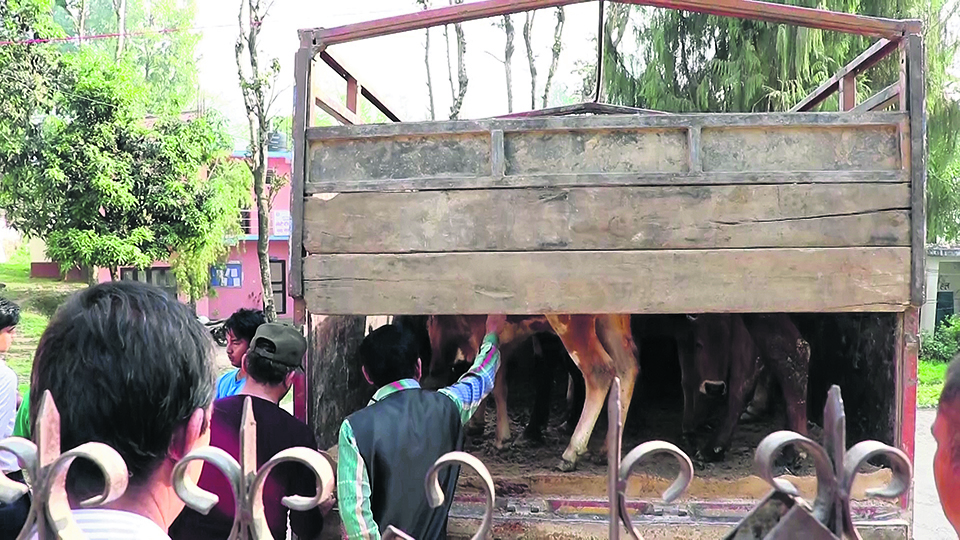 DHADING, May 3: Police and Veterinary Hospital, Dhading on Wednesday seized a truck, which was allegedly smuggling old cattle to India.

Most of these cattle reportedly end up in Indian slaughterhouses.

After receiving repeated complaints from locals about the ongoing smuggling of cattle to India, the Dhading district police had intensified investigation. Villagers living nearby the Prithvi Highway have been allegedly exporting and importing livestock to and from India without following any legal procedures.

Binod Yadav, a veterinarian at the Veterinary Hospital, Dhading informed Republica that the truck (Na Kha 7139) loaded with 11 cows and an ox and in route to Makawanpur from Thakre Rural Municipality of Dhading was seized from the highway.

Later it was revealed that the cattle were actually being smuggled to India. The truck did not have any legal document on the consignment. Police have handed over the cattle to the Veterinary Hospital.

As there is no Livestock Quarantine Office in Dhading, the hospital has handed over the cattle to the animal quarantine office in Ramnagar of Chitwan for investigation. “We don’t have the authority to take action against the culprits involved in these kinds of cases,” said Yadav, adding, “So, we handed over the truck to the Livestock Quarantine Office, Ramnagar in Chitwan for further action against those responsible.”

In recent days, hundreds of old cows and oxen are smuggled to India through the highway. The Nepali law bars the slaughter of cows and oxen. And for transporting cattle from one place to another, quarantine checks are a must.

15 sleeping workers crushed to death by a truck in Gujarat

KATHMANDU, Jan 19: As many as 15 laborers who were sleeping near the road were crushed to death by a... Read More...