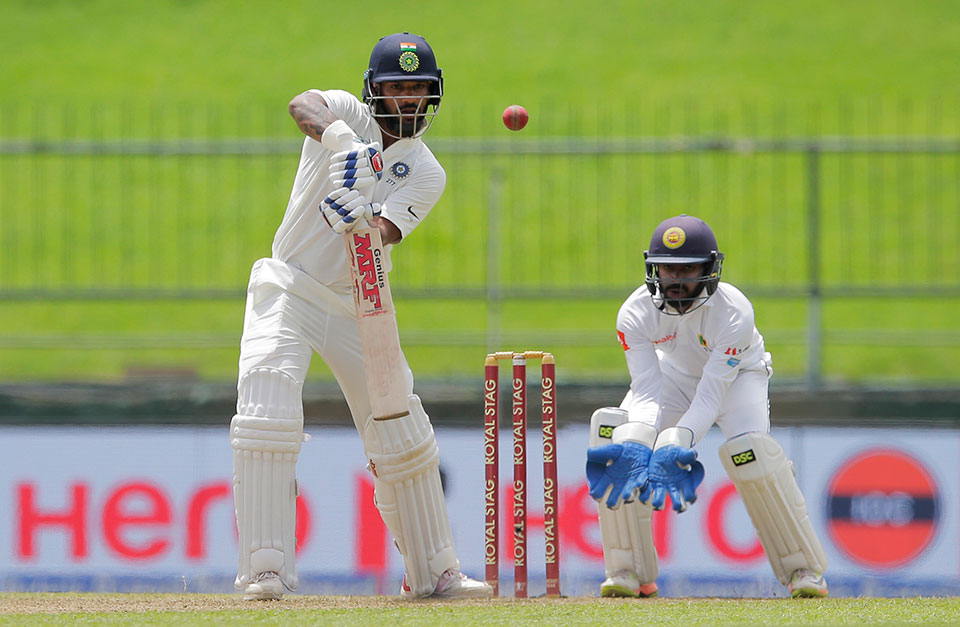 PALLEKELE, Sri Lanka, August 12: Sri Lanka's spinners fought back to share five wickets Saturday as India reached 329-6 at stumps on the opening day of the third and final cricket test.

Chasing a series sweep, India looked set for an even better Day 1 after a 188-run opening partnership. Shikhar Dhawan made his sixth test century and shared the first-wicket stand with Lokesh Rahul (85).

Sri Lanka then took six wickets for 141 runs to limit the damage.

"We were playing our shots and got out, it was not as if we were getting out because of the wicket or anything. After that, the Sri Lankan bowlers bowled well and pulled the match a little bit on their side," Dhawan said. "We got a good start and still feel at the end of the day 329 is a good score."

Rahul hit eight boundaries but was the first Indian batsman out when he tried to clear mid-on against left-arm spinner Malinda Pushpakumara and was caught by Dimuth Karunaratne.

Pushpakumara later bowled Ajinkya Rahane for 17 to finish the day on 3-40 off 18 overs.

Pujara had scored centuries in the last two test matches.

Earlier, Kohli won the toss for a third time in the series and elected to bat first, a strategy that has proved successful for him. His team has posted 600 or more in the first innings of the series so far.

The opening pair of Dhawan and Rahul gave India a brisk start and reached 134 without loss at lunch. India scored a further 101 runs in the middle session despite three wickets falling. The third session yielded 94 runs.

India has already secured the series 2-0 with two big wins.

And Sri Lanka needed its spinners.

"I'm not happy with the way the fast bowlers bowled in the morning, they bowled here and there. I'm not giving excuses. These guys are inexperienced," Sri Lanka bowling coach Chaminda Vaas said. "Vishwa (Fernando) is playing his second game and Lahiru (Kumara) is bowling in his sixth. They didn't bowl well. After lunch they came back and bowled pretty well."