Inaccessibility forces children to drop out of schools in Jajarkot 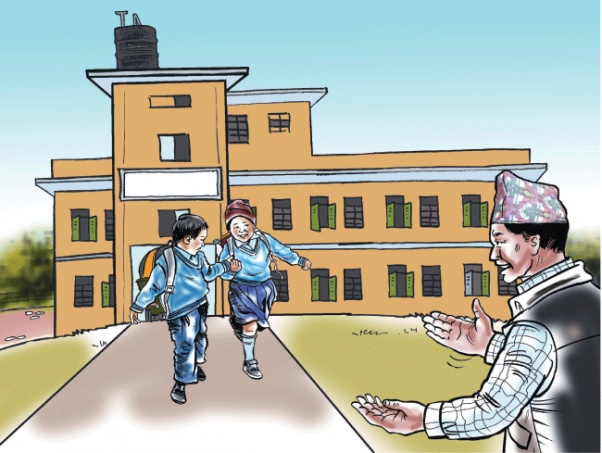 JAJARKOT, Jan 27: Children of four settlements in Barekot Rural Municipality-8 in Jajarkot have no access to school. Children here are unable to go to schools which are far from the villages. The school-age children from Rimdara, Khalaka Khutte, Dandakhani and Upper Laikham have been deprived of school education.

These settlements are too remote in the district, according to a local Rana Bahadur Khatri. The number of the children out of school is counted not at one, two or tens but at hundreds, he said.

At least three-hour walk is required to reach the nearby school from these settlements at Sanghutara which is not easily possible for small children. He said he himself put his first step at a school when he was 11-year-old. His most of colleagues and sisters who never saw schools during their childhood are living illiterate life.

Of late, there was a kind of competition here to open schools but no school was established targeting the children of these settlements. Many of the children reaching the age to complete basic school education are enrolled in Grade one and drop-out rates were so high. Self- humiliation is one of the major factors behind this because the grown-up children (students) do not feel it comfortable with their juniors.

“Our children could go to school on time if we had the school for them near our settlements,” said a parent Hari Bahadur Khatri. It has really affected their future.
People of these non-Dalit settlements have a great dream of seeing a school set up for the benefits of their children. “It is really difficult for small children to walk up to three hours to reach the school,” guardians said. One Jay Bahadur Khatri said if Laikham had at least one school, no children could be deprived of (timely) education.

It is not only the education that panics the people but various other facilities as communications, electricity and health service. Their voices for addressing these burning concerns fell on deaf ears of the authorities concerned. They had appealed to the then District Education Office and current local government to take initiations to establish a school. It takes around four hours on foot to reach the Sepukhola-based health facility, the nearest health institution from the settlements.

Hundreds of children from the settlements have been deprived of fundamental rights of education. To a sheer irony to the situation, the government has already declared Jajarkot a literate zone. RSS

KATHMANDU, Sept 25: Locals in Shiwalaya Rural Municipality in the western part of Jajarkot district have no other choices except... Read More...

Students studying at Pitaraj Basic School (PBS) of Liwang, the district headquarters of Rolpa, have been fainting and collapsing inside... Read More...