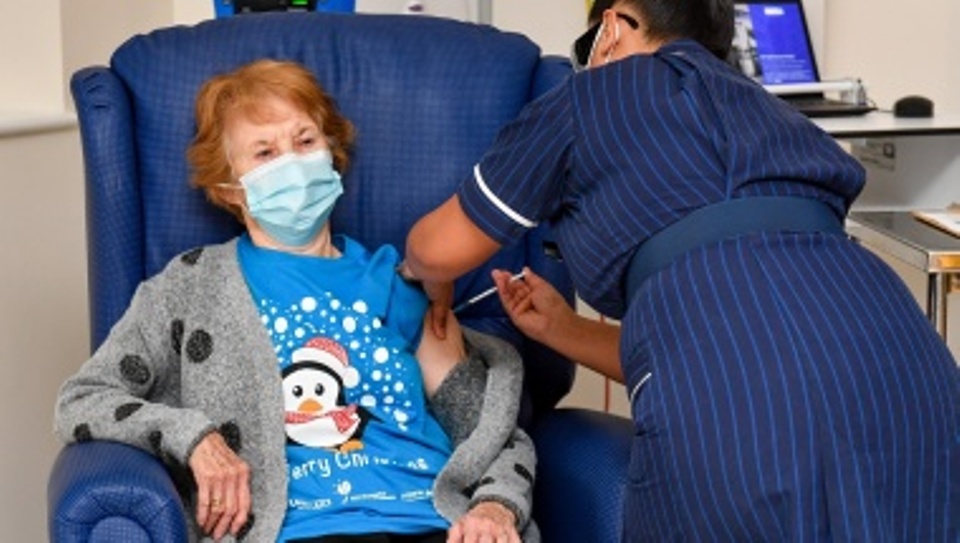 FILE PHOTO: A dose of the coronavirus disease (COVID-19) vaccination of BioNTech and Pfizer is pictured in this undated handout photo, as Britain became the first western country to approve a COVID-19 vaccine, in Mainz, Germany. BioNTech SE 2020, all rights reserved/Handout via REUTERS

LONDON, Dec 8: Britain began the mass-vaccination of its population against COVID-19 on Tuesday, becoming the first Western nation to do so in a global endeavour that poses one of the biggest logistical challenges in peacetime history.

On a day dubbed “V-Day”, health workers started inoculating people with a shot developed by Pfizer and BioNTech, with the country a test case for the world as it contends with distributing a compound that must be stored at -70C (-94F).

Britain is the first country globally to begin mass inoculations with that vaccine, one of three shots that have reported successful results from large trials after being developed in record time.

Margaret Keenan, a 90-year-old grandmother from Britain, was the first person in the world to receive the vaccine outside of a trial following its rapid clinical approval.

Health minister Matt Hancock described the start of vaccinations as “V-Day”. “If we manage to do that for everybody who is vulnerable to this disease, then we can move on and we can return to normal,” he said.

The launch will fuel hope that the world may be turning a corner in the fight against a pandemic that has killed more than 1.5 million people and crushed economies.

Britain, the worst-hit European country with over 61,000 deaths, has ordered enough supplies of the Pfizer-BioNTech shot to vaccinate 20 million people. The developers said it was 95% effective in preventing illness in final-stage trials.

Russia and China have both already started giving domestically produced vaccine candidates to their populations, though before final safety and efficacy trials have been completed.

In Britain, about 800,000 doses are expected to be available within the first week, with care home residents and carers, the over-80s and some health service workers prioritised.

The country is relatively small with good infrastructure. Yet the logistical challenges in distributing the vaccine, which only lasts five days in a regular fridge, mean it will first go to dozens of hospitals and cannot yet be taken into care homes.

Bigger tests could await for the Pfizer-BioNTech shot, as well as a vaccine from Moderna, which was found to have a similar level of success in trials and is based on the same mRNA genetic technology that requires such ultra-cold storage.

Transport and distribution could prove more challenging in bigger countries, including the United States and India which have been worst-hit by the pandemic, and in hotter nations.

The third vaccine to have had trial success, developed by AstraZeneca and Oxford University, is viewed as offering one of the best hopes for many developing countries because it is cheaper and can be transported at normal fridge temperatures. Late-stage trials found it had an average success rate of 70%.

Britain approved the Pfizer/BioNTech vaccine for emergency use less than a week ago, and is rolling it out ahead of the United States and European Union, from which it will finally part ways at the end of the year.

“The deployment of this vaccine marks a decisive turning point in the battle with the pandemic,” said Simon Stevens, head of the publicly funded NHS health service.

In total Britain has ordered 40 million doses of the Pfizer/BioNTech shot. As each person requires two doses, that is enough to vaccinate 20 million people in the country of 67 million.

But the country is spreading it bets and has ordered 357 million doses of seven different COVID-19 vaccines in all.

Explainer: What do the UK allergic reaction cases mean for Pfizer's COVID-19 vaccine

UK gears up for huge vaccination plan watched by the world

US dollar soars to an all-time high
12 minutes ago