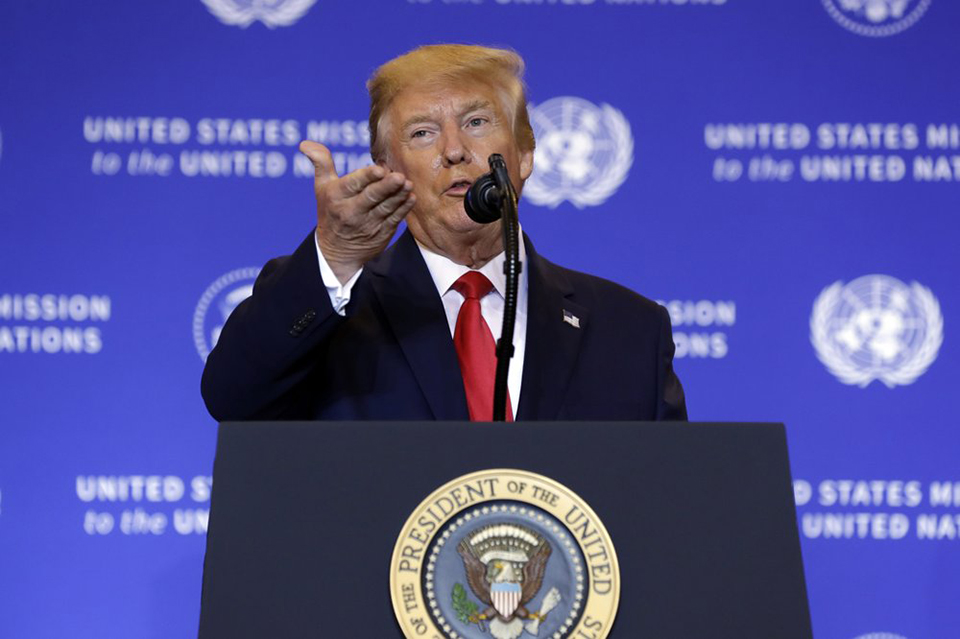 WASHINGTON, Dec 18: The U.S. House of Representatives is set to take a momentous and deeply polarizing vote on Wednesday when it is likely to impeach President Donald Trump on charges of abusing his office and obstructing a congressional probe.

The vote in the Democratic-controlled House is expected to fall almost entirely along party lines, underscoring the deep divide in Congress over Trump’s conduct - and the larger political schism within the nation itself.

Trump would become only the third U.S. president to be impeached, an extraordinary check on presidential power spelled out in the U.S. Constitution for executives who commit “high crimes and misdemeanors.” No president has ever been removed from office under its terms.

The vote, expected in the afternoon or early evening, would result in a trial next month in the U.S. Senate in which House members would act as prosecutors. That chamber is controlled by Republicans, who have shown little interest in removing Trump from office.

House Democrats accuse Trump of abusing his power by asking Ukraine to investigate Joe Biden, a former U.S. vice president and a leading Democratic contender in the 2020 election. Trump is also accused of obstructing the congressional investigation into the matter.

Trump has called the impeachment process “a total sham,” and on Tuesday sent House Speaker Nancy Pelosi a lengthy letter in which he accused her of engaging in a “perversion of justice.”

The president has denounced the probe as an “attempted coup” and has argued Democrats are trying to undo the results of the 2016 election in which he defeated Democrat Hillary Clinton.

“Can you believe that I will be impeached today by the Radical Left, Do Nothing Democrats, AND I DID NOTHING WRONG! A terrible thing,” Trump tweeted early on Wednesday morning. “Say a prayer!”

With Trump seeking a second term next year, impeachment has cleaved the public, with most Democratic voters supporting it and most Republicans opposed.

What remains unclear is whether the months-long partisan drama will have any effect on the 2020 election beyond giving Trump reasons to boast of having beaten back Democratic efforts to remove him.

Republicans contend that a “yea” vote on impeachment could cost some moderate House Democrats their seats in next year’s congressional elections. Still, several Democrats who represent districts that backed Trump in 2016 have said in recent days they will vote to impeach him.

On the eve of the vote, Pelosi sent a letter on Tuesday to all 232 Democratic members of the House, urging them to abide by the Constitution’s standards.

“Very sadly, the facts have made clear that the President abused his power for his own personal, political benefit and that he obstructed Congress as he demanded that he is above accountability, above the Constitution and above the American people,” she wrote.

Fearful of the political blowback, Democrats were long resistant to an impeachment inquiry even after Special Counsel Robert Mueller outlined potential episodes of Trump obstructing justice in his report on Russian interference in the 2016 election.

But after a whistleblower brought to light a July phone call in which Trump pressed Ukrainian President Volodymyr Zelenskiy to investigate Biden, House Democrats moved swiftly to take testimony from current and former administration officials.

Democrats accuse Trump of freezing nearly $400 million in U.S. security aid to Ukraine and offering a possible White House meeting to Zelenskiy to get him to publicly announce investigations of Biden and his son Hunter, who was on the board of a Ukrainian gas company.

The first article of impeachment details the Democrats’ account of Trump’s dealings with Ukraine. The second article accuses Trump of obstruction of Congress by directing administration officials and agencies not to comply with lawful House subpoenas for testimony and documents related to impeachment.

The Senate has yet to set its procedures for a trial on the charges, which would be overseen by U.S. Chief Justice John Roberts.

The chamber’s top Republican, Majority Leader Mitch McConnell, has rejected Democratic proposals to call further administration officials to testify and has said there is “no chance” Trump will be removed from office.

On Tuesday, McConnell said on the Senate floor that it would be senators’ role to act as a “judge and jury” in the trial, but he later told reporters that he would not be “an impartial juror.”

Removing Trump from office would require a two-thirds majority of those present and voting in the 100-member chamber, meaning Democrats would have to persuade at least 20 Republicans to join with them to end Trump’s presidency.

Trump impeachment: Is it possible – and how would it play out?