In defense of the constitution 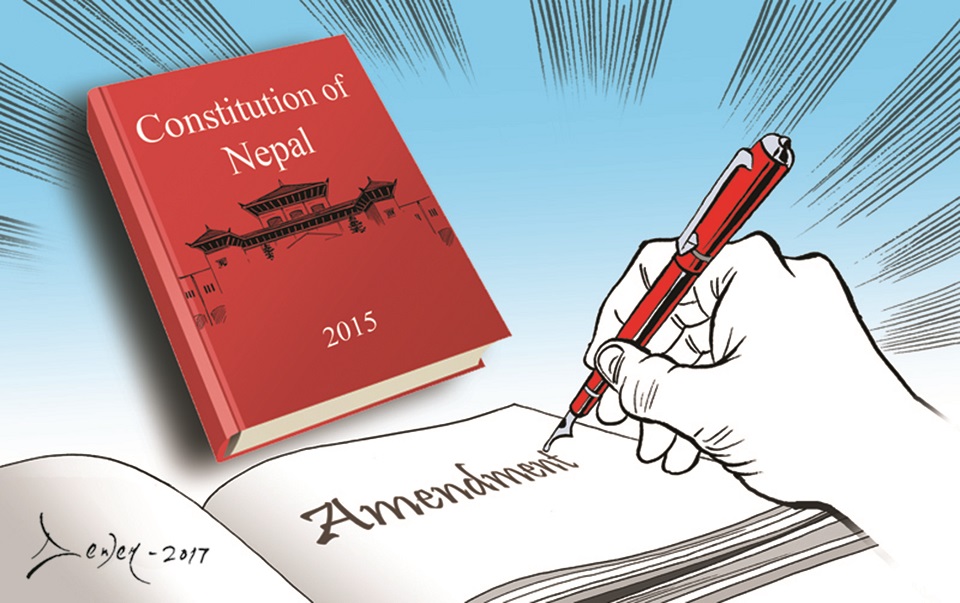 As he suggests, constitution is an amendable document and countries amend the constitution based on needs and relevance.

Take Indian constitution. The Indian constitution, which came into force on January 26, 1950, was first amended on June 18, 1951 and there have been over hundred amendments so far. The first amendment introduced progressive provisions including reasonable restriction on the fundamental freedoms, parliamentary power to enact special provisions for the advancement of socially and educationally backward classes, or Scheduled Castes and Scheduled Tribes.  Constitution is amended for ensuring wider ownership, clarity and brevity.

In India, judiciary has helped democracy flourish despite repeated failures of other organs. We could do the same in Nepal. There is no reason to be disappointed with few conflicting provisions in our constitution.

Pain of suffering
Praveen and I belong to the same community: We practice the same culture and tradition and speak the same language. The state discriminated against us for long. I too feel embarrassed when a person of hill origin doubts my loyalty to the state. Madhesis are not given entry in Gurkha regiments. We don’t have adequate representation in security organs, administration, bureaucracy and other government services. We are very often judged as outsiders. In Kathmandu, our brothers and sisters who sell vegetables or work as vendors have to face misbehavior from the local people, even police, just for being Madheshis.

Praveen is right that I got the job under proportional representation quota. Reservation is a form of discrimination but when it comes to the reservation of underprivileged groups I feel it is a positive discrimination which ought to be promoted. The constitution obliges the state to mainstream the weaker sections of the society. I take this as a step ahead in right direction.

Acknowledge the merits
A few things about our constitution are worth mentioning. One, it’s the first formal constitution to affirm federal republican democracy. Fundamental Rights and Directive Principles of the constitution are the splendid collection of rights, worthy of a public welfare state and envisage empowered citizenry. Third, Nepal sets aside 33 percent parliamentary seats for women, which is a major breakthrough.

Nepal’s federal structure is merited with seven provinces, with clear lists of legislative powers for the central, provincial and local bodies. Inclusiveness is the spirit of this constitution keeping in mind the rights of women, the disabled, sexual minorities and other oppressed groups. It’s the foremost fundamental document in Asia—and only the third in the world along with South Africa and Ecuador—to expressly guarantee the rights of transgender people. Ours is the first charter in South Asia to include explicit mandate of one-third representation of women in legislative apparatus. How can we call it a regressive charter?

The constitution failed to address concerns of Madheshi people in terms of federalism, electoral representation and citizenship. More than 40 people lost their lives during the anti-constitution protests.

But why did Madhesi leaders instigate Madheshi people against the constitution, if they were to ultimately accept it? Why do Madheshi leaders and activists rarely pressure for development and job creation? Everyday Madheshi youths fly away to the Gulf nations in search of jobs. I have not heard any Madhesi leaders raise this issue.

Over and above this, it has been a fashion among Madhesi leaders to criticize the constitution and Kathmandu establishment to radicalize the masses. Such tendencies do not strengthen democracy.

No constitution is flawless and we notice the flaws in the process of implementation.  Some provisions relating to citizenship and judiciary are not satisfactory. The naturalized citizens are considered inferior. Judiciary is yet to adopt a federal shape.

I too have some bad experiences. When I was student in the university my English teacher (I don’t want to name him) used to call me Dhoti and Marshiya in the class. A respected university teacher or government officers could still be insulted as ‘Dhoti” in the streets and public buses in Kathmandu. But constitution is not to be blamed for this.

Let it evolve
There can be political debates, heated arguments too at times and even the street protests. Yet amidst the noise and chaos, what the preamble of our constitution has taught ordinary population and those who claim to be representatives of people is that despite extraordinary diversity and differences along the lines of ethnicity, caste or religion, Nepal must remain one and march ahead with full faith on democratic credentials. There is no need to be disappointed with handful number of conflicting provisions. They can be amended.

The constitution of Nepal—like other constitutions of the world—will also evolve with the passage of time. But the whole debate becomes misguided when we fail to see the distinction between the flaws of the constitution and the mistakes the actors in the government make.

The author, formerly a lecturer at
Kathmandu University School of Law, is currently a judicial officer with Janakpur High Court, Birgunj Bench

KATHMANDU, July 12: Amid widespread criticism that he lied to the people about an Indian government letter requesting halt to pesticides... Read More...

KALIKOT, Dec 23: Following the tense situation in the district headquarters Manma after the death of a temporary (myadi) police... Read More...

LALITPUR, Aug 18: Speaker Onsari Gharti has said people from every caste, religion and community in the country are capable... Read More...