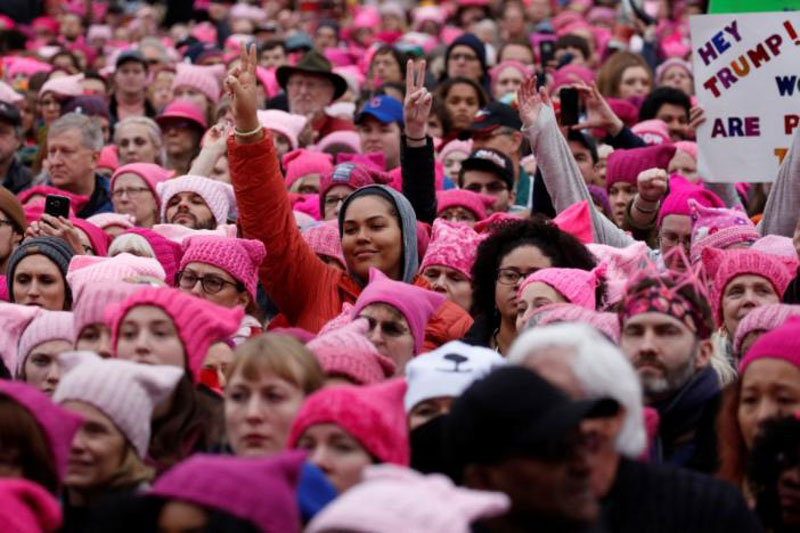 Women took to the streets in unexpectedly large numbers in major U.S. cities on Saturday in mass protests against U.S. President Donald Trump, in an early indication of the strong opposition the newly inaugurated Republican may face in office.

Hundreds of thousands of women - many wearing pink knit hats to evoke comments by Trump that triggered outrage among many - filled long stretches of downtown Washington around the White House and National Mall. Hundreds of thousands more women thronged New York, Los Angeles, Chicago and Boston to rebuke Trump on his first full day in office.

Trump has angered many liberal Americans with comments seen as demeaning to women, Mexicans and Muslims. He worried some abroad with his inaugural vow on Friday to put "America first" in his decision-making.

Around the world, women marched in sympathy and shared outrage in hundreds of cities, drawing a total turnout that organizers estimated at more than 4 million.

The Women's March on Washington appeared to be larger than the crowds that turned a day earlier to witness Trump's swearing-in on the steps of the U.S. Capitol. No official estimates of the crowd size were available, but the demonstrators appeared to easily exceed the 200,000 organizers had expected.

Sister March organizers estimated drawing 750,000 demonstrators to the streets of Los Angeles, and a planned march in Chicago grew so large that organizers did not attempt to parade through the city but instead staged a rally. Chicago police said more than 125,000 people attended the event.

The protests illustrated the depth of the division in the country, still reeling from the bitterly fought 2016 election campaign. Trump stunned the world by defeating Democrat Hillary Clinton, a former secretary of state and first lady who made history as the first woman nominated for president by a major U.S. political party.

Pam Foyster, a resident of Ridgway, Colorado, said the atmosphere in Washington reminded her of mass protests during the 1960s and '70s against the Vietnam War and in favor of civil rights and women's rights.

"I'm 58 years old, and I can't believe we are having to do this again," Foyster said.

Although Republicans now control the White House and both houses of Congress, Trump faces entrenched opposition from segments of the public as he takes office, in contrast to the honeymoon period that new presidents typically experience at the outset.

A recent ABC News/Washington Post poll found Trump had the lowest favorability rating of any incoming U.S. president since the 1970s.

Tens of thousands of protesters filled streets of midtown Manhattan, while around the world thousands of women took to the streets of Sydney, London, Tokyo and other cities in Europe and Asia in sister marches against Trump.

Sister March sponsors boasted some 670 gatherings around the world in solidarity with the Washington event, estimating a global turnout of more than 4.6 million participants, although those numbers could not be independently verified.

Trump, in a Twitter post on Saturday, wrote, "I am honored to serve you, the great American People, as your 45th President of the United States!" He made no mention of the protests. Trump attended an interfaith service at Washington National Cathedral and then visited the Central Intelligence Agency headquarters.

No official crowd estimates were available from the National Park Service or Washington police.

Trump on Saturday angrily attacked media reports, including photos, that showed crowds at Friday's inaugural were smaller than those seen in 2009 and 2013, when Barack Obama was inaugurated for his first and second terms as president. Overhead photos of the area showed significantly smaller crowds on Friday compared with Obama's first inauguration eight years ago.

"I made a speech, I looked out, the field was, it looked like a million, million and a half people," Trump said at his visit to the CIA. "They showed a field where there were practically nobody standing there."

Saturday's march was peaceful, a sharp contrast to the day before when black-clad anti-establishment activists, among the hundreds of demonstrators protesting against Trump, smashed windows, set vehicles on fire and fought with riot police, who responded with stun grenades.

Washington prosecutors on Saturday said about $100,000 in damage had been done and 230 adults and five minors had been arrested.

Many protesters on Saturday wore knitted pink cat-eared "pussy hats," in reference to Trump's claim in the 2005 video that was made public weeks before the election that he grabbed women by the genitals.

The Washington march featured speakers, celebrity appearances and a protest walk along the National Mall.

Among the well-known figures who attended were Madonna, who swore while discussing Trump before singing her 1989 hit "Express Yourself," singer-actress Cher and former U.S. Secretary of State John Kerry, who waved to supporters as his walked his yellow Labrador, Ben.

Clinton won the popular vote in the Nov. 8 presidential election by around 2.9 million votes and had an advantage among women of more than 10 percentage points. Trump, however, easily won the state-by-state Electoral College vote that actually determines the winner.

Trump offered few if any olive branches to his opponents in his Friday inauguration speech in which he promised to put "America First."

"He has never seemed particularly concerned about people who oppose him, he almost fights against them instinctively," said Neil Levesque, executive director of the New Hampshire Institute of Politics at Saint Anselm College.

But the lawmakers whom Trump will rely on to achieve his policy goals, including building a wall on the Mexican border and replacing the 2010 healthcare reform law known as Obamacare, may be more susceptible to the negative public opinion the march illustrates, Levesque said.

"Members of Congress are very sensitive to the public mood and many of them are down here this week to see him," Levesque said.

At the New York march, 42-year-old Megan Schulz, who works in communications, said she worried that Trump was changing the standards of public discourse.

"The scary thing about Donald Trump is that now all the Republicans are acquiescing to him and things are starting to become normalized," Schulz said. "We can't have our president talking about women the way he does." 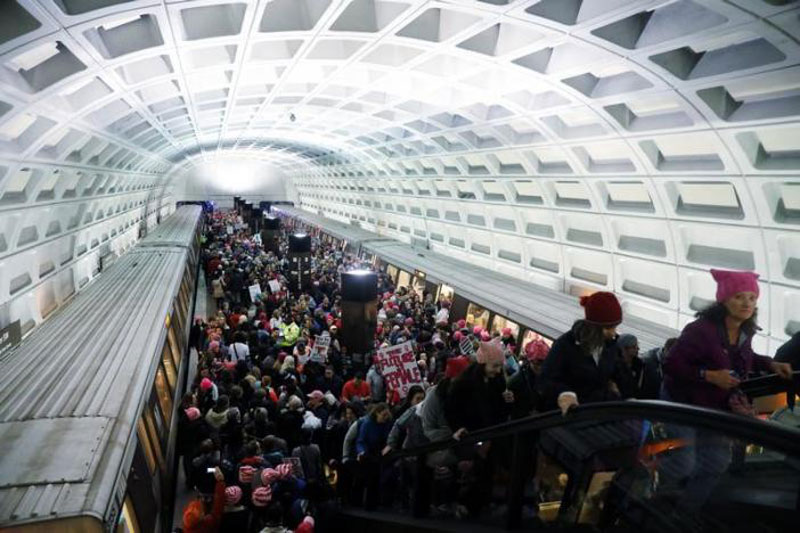 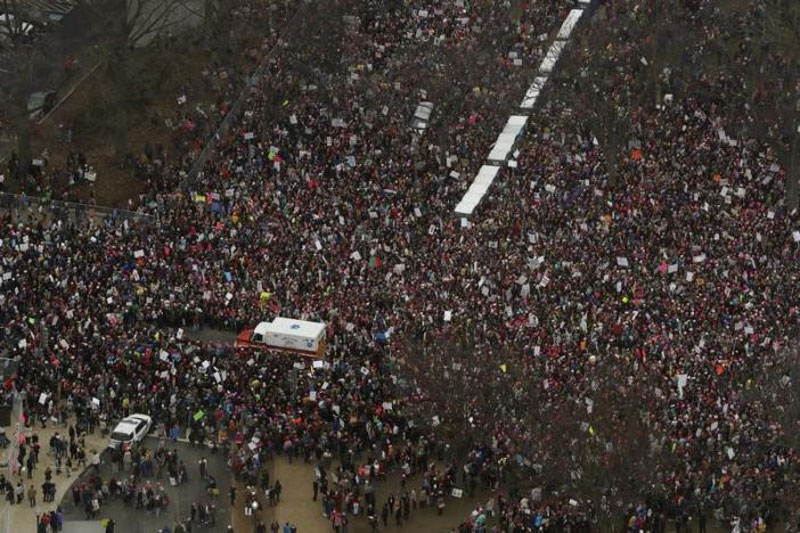 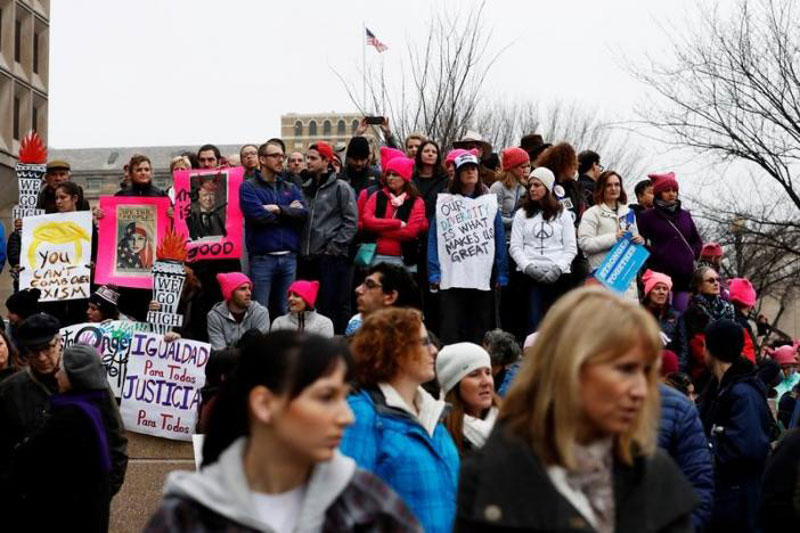 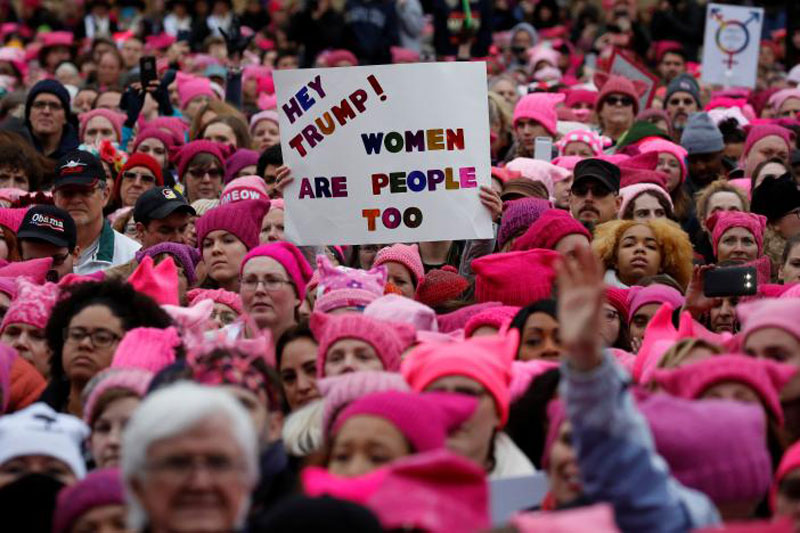 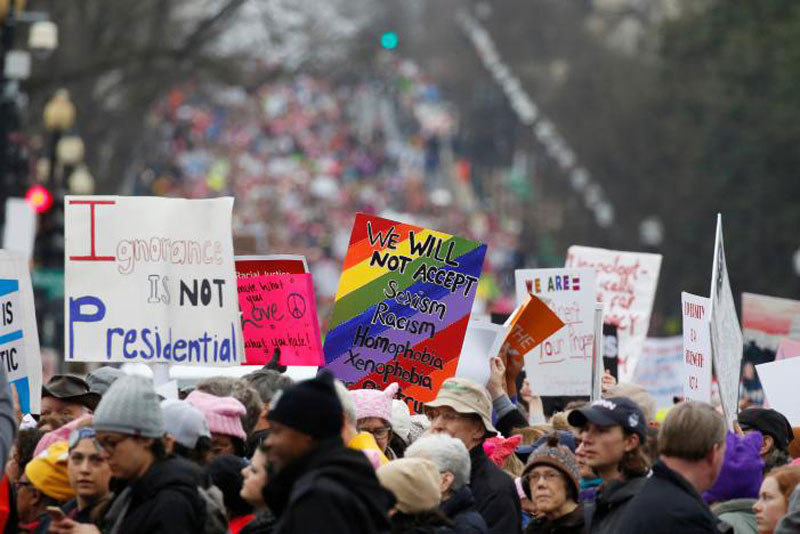 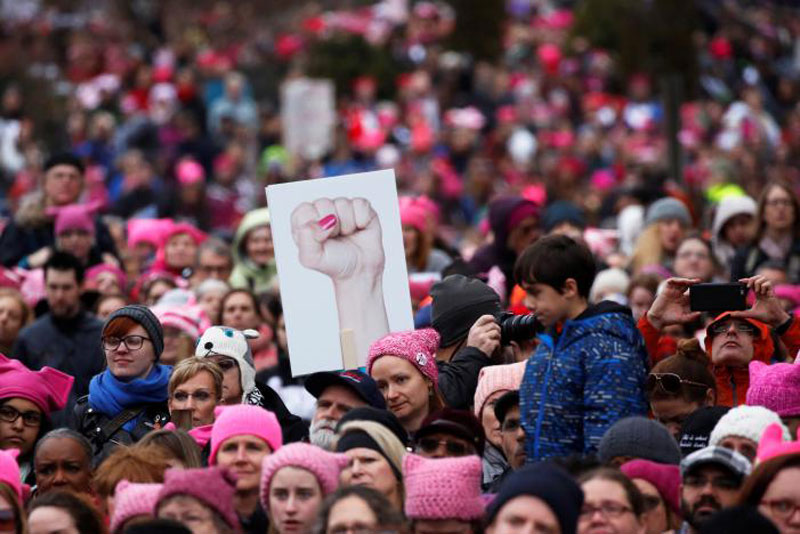 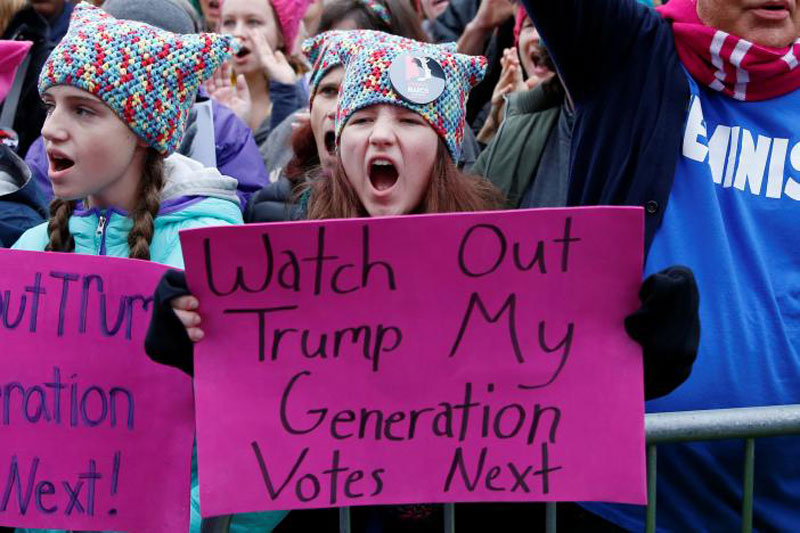 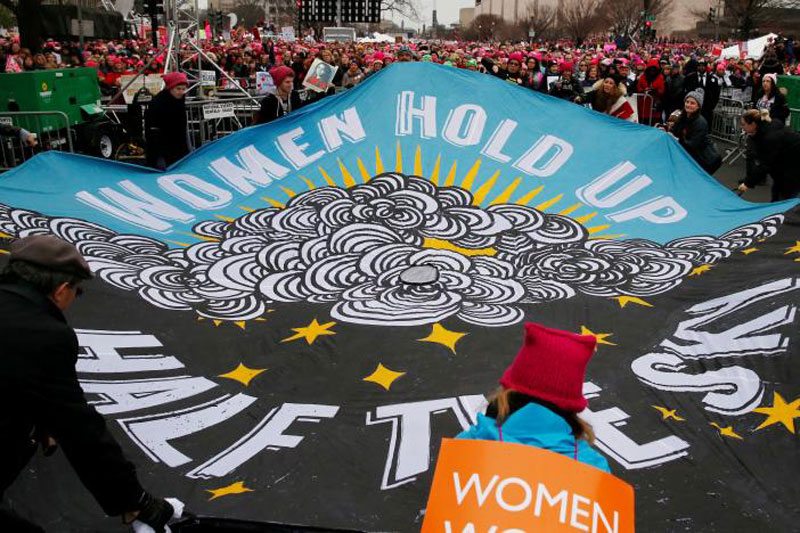 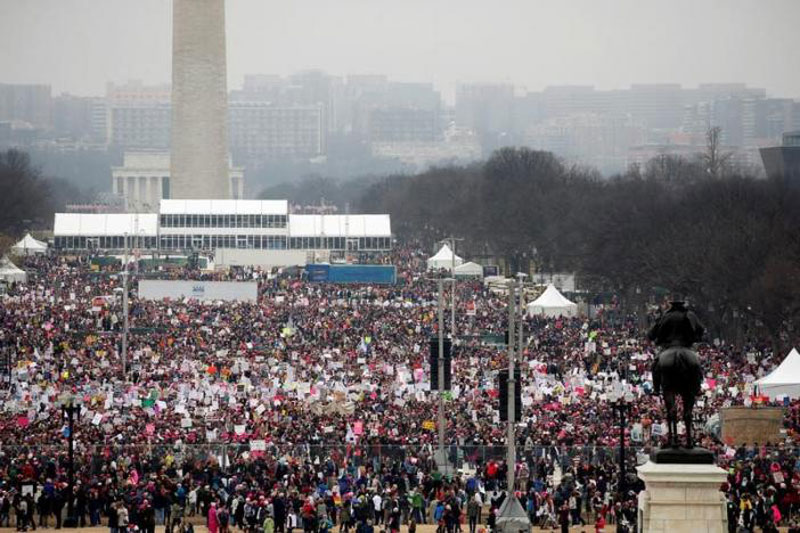 Protesters across U.S. call on Trump to reunite immigrant families

WASHINGTON, July 1: Tens of thousands of protesters marched in cities across the United States on Saturday to demand the... Read More...

Maintaining dignity during menstruation
21 hours ago

Gross investment in the current FY grows at slower pace due to low govt capital expenditure: Economic Survey
5 hours ago

RPP contested local elections on its own strength: Chairperson Lingden
11 hours ago

Menstruation a mark of women's motherhood: Minister Bhusal
14 hours ago