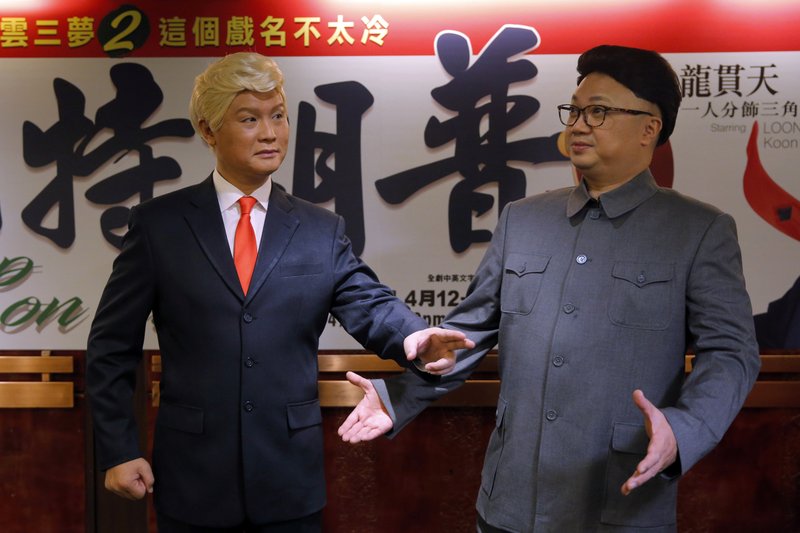 HONG KONG, April 14: With the blond wig and red tie, the star of the Cantonese opera in Hong Kong may look familiar.

The Chinese actor and singer has the lead role in “Trump on Show,” a four-day comedic opera reimagining the U.S president’s personal life and his fictional twin brother who lives in China.

The three-hour opera opens with America’s first family moving into the White House, where Trump’s daughter Ivanka discovers an old suitcase. Inside she finds an English version of “The Little Red Book,” which details ideas on class struggle by the founding chairman of modern communist China.

In the show, Donald Trump goes to China and meets Mao and Zhou En-lai, the first premier of communist China. Trump also receives a visit from North Korean leader Kim Jong Un in the U.S.

“It could definitely draw people’s attention if the play is about popular political figures due to their popularity and influence. I hope this opera will get my ideas across to the audience,” he said.

He hopes that one day, “Trump on Show” could even be performed at the White House or in Pyongyang for Kim Jong Un.

“This is definitely our dream,” he said.

The opera plays until Monday at the Sunbeam Theatre, which is one of the long-established traditional Cantonese opera venues in Hong Kong, created in 1972.

“This opera has to be performed in Cantonese, but of course, there will be some English in it,” said Loong Koon-tin, a Cantonese actor with more than 40 years’ stage experience, who plays Trump. “I will certainly portray Trump’s special characteristics. I will wear a red tie and suit, with a blond hair wig and golden eyebrows,” he said. “Apart from the appearance, I would also imitate the way he talks as well as his body language.”

Roger Chan, a Cantonese actor who plays Kim, said they did a lot of research on the North Korean leader. “We try to get to know him through daily news reports,” he said.

“I think the theme is very fresh, original and unimaginable because it must be difficult to use traditional Cantonese opera elements and performing methods to perform and interpret the role of these modern world-leading characters,” said Chan Chi-kai, who came to see the show as a loyal fan of the playwright.

Another audience member, Justin Lee, came all the way from Shanghai.

“With the recent tense relationship between China and America due to the trade war, I want to watch this show and see how the playwright depicts Donald Trump, and hope the show will bring on new ideas to improve U.S.-China relationship,” he said.

Nepal should act as the peacemaker
6 hours ago

Sajha Yatayat to resume service in Kathmandu Valley
3 hours ago

Rautes in deep crisis amid prolonged lockdown
4 hours ago