In a must-win game, Nepal aims to advance into next round in AVC central zone volleyball 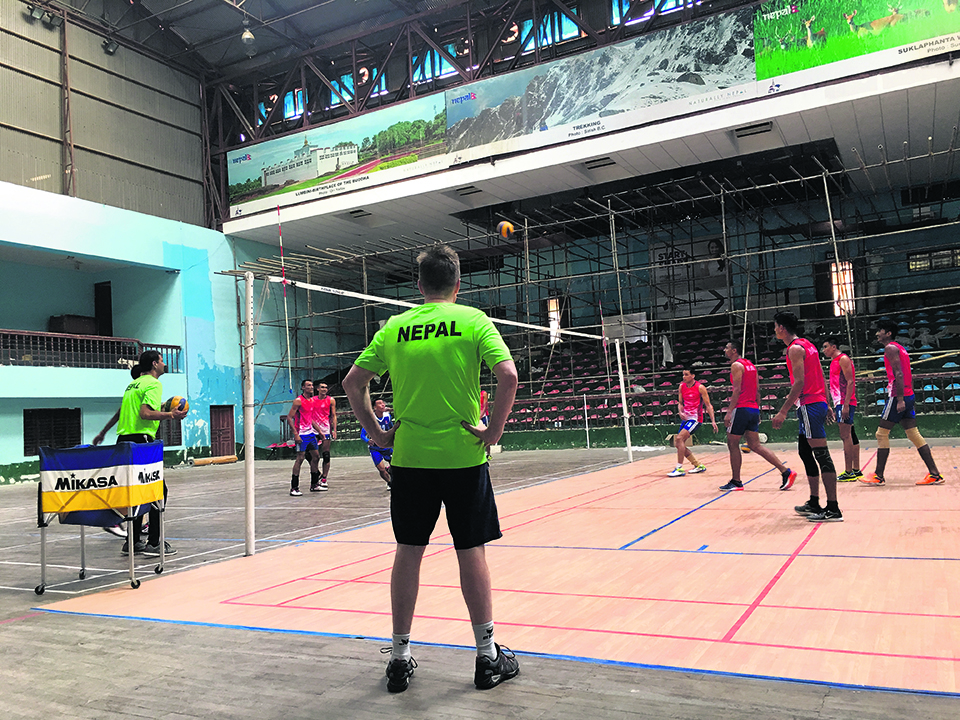 KATHMANDU, Aug 21: After a disappointing loss to Kyrgyzstan on Monday, the Nepal national volleyball team now targets to defeat the Maldives on Wednesday with an aim to advance into the next round of the Asian Volleyball Confederation (AVC) Central Zone Senior Men’s Volleyball Tournament.

After a 3-0 loss to Kyrgyzstan in the first Group A match, Nepal will open the doors for the qualification for the next round if it defeats the Maldives. With the straight set loss on Monday, Nepal is in a pressure to win its last game.

After Kyrgyzstan defeated the Maldives in its second game on Tuesday, both the Maldives and Nepal are in a do or die situation to win the game.

But, the host Nepal will be in a high confidence heading to the game since in the last five meetings between the sides, Nepal has clinched three games. Nepal will now try to extend the winning tally against the Maldives with a stronger head-to-head, and reach the next round.

On Tuesday’s match, Kyrgyzstan defeated the Maldives on straight sets of 25-15, 26-24, 25-19 to reach the next round as the group winner with Nepal’s hopes of reaching to the next round alive.

Nepal needs to beat the Maldives to survive in the tournament.
Nepal head coach Han Abing expects the game to be very competitive as a win will be important for both the teams.

“The match between Nepal and the Maldives will be very competitive. Both the teams will be looking for a win,’’ Abing said, “We are targeting to perform very well and reach the next round. We can win if we play with a positive mentality.”

Coach Abing is hopeful of Nepali crowd’s support becoming quite helpful in boosting confidence to the players. He allayed the concerns about the team weakness in receive and block claiming that such rumors were baseless.

“Analyzing the Monday’s game, Kyrgyzstan played 10 times better than Nepal. Nepal played two times better in the game compared to the team’s previous games. There is no problem or weakness in receive and block,’’ Abing added, “The team will get confidence from the home crowd and if we play our usual game, there is no reason to doubt about the possibility of our win.”

Captain Em Rana Magar said that the team will face the Maldives with high morale.

“We are planning to play attacking from the first set. In previous meetings, we have managed to pull out good results against the Maldives. That’s the reason we are confident,’’ Magar added, “We have to weaken their receive and foil the spike. Maldives is a rising country in volleyball, we should not underestimate them. We have to win the game as we are in a must-win situation.”