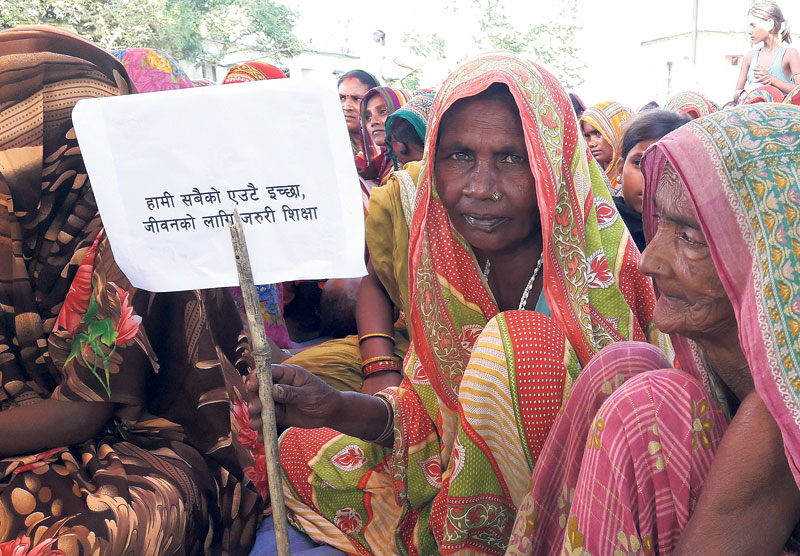 Participants of a program organized in Patanu of Dhanusa district to mark the international day for Eradication of Poverty on Tuesday. (Suresh Yadav/ Republica)

JANAKPUR, Oct 19: Poverty Alleviation Fund (PAF) organized an interaction program at Patanu, a rural village in Dhanusa district, to mark the International Day for Eradication of Poverty.  Speaking at the interaction jointly organized by PAF and Local Development Fund on Tuesday, leaders of political parties, representatives from civil society, PAF officials and beneficiaries of PAF projects, said that education should be given priority to reduce poverty.

According to officials of PAF, its income generation programs in the village has been benefitting locals, mostly Dalits.

“To eradicate poverty from the society, primary focus should be given to education,” said Dinesh Chandra Mahato, a local resident. "Let's be educated first, and we will get rid of poverty," he added.

The International Day for Eradication of Poverty is celebrated on October 17 every year.
Also speaking at the program, Satish Chandra Jha, manager at PAF's project office, said that PAF's income generating project for the poor people has been benefitting 16,000 households out of 138,000 households in the district.

According to Jha, the project has mobilized 751 groups in 42 VDCs, four municipalities and one sub-metropolitan city in income generating activities.

He said that social mobilization, training on income generating skill, capacity development and building infrastructure in villages are some of the activities carried out by PAF and LDF to lift people out of poverty.

Discussing the importance of art education