Implementing previous govt's deals with China is my priority: Poudyal 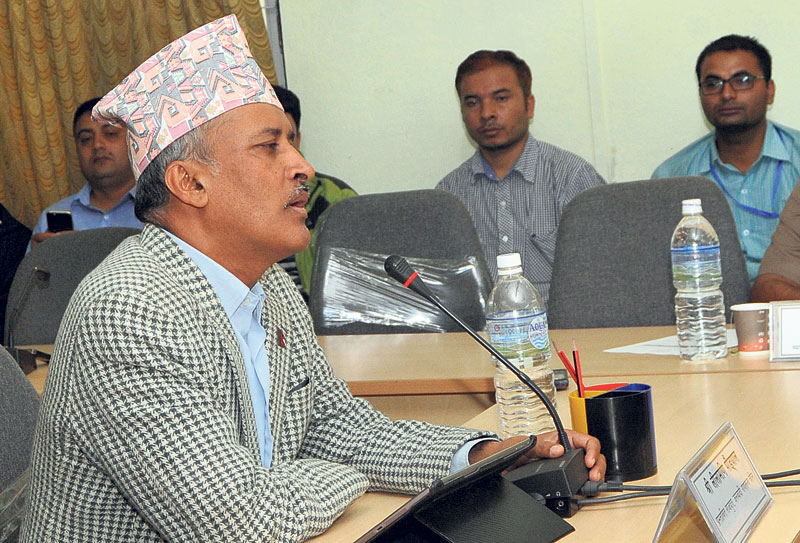 Paudyal, Upadhyay likely to be appointed ambassadors today
KATHMANDU, Sept 29: Former Chief Secretary Leela Mani Poudyal, who has been recommended as Nepal's ambassador to China, said he accepted the position mainly with a commitment to implement the bilateral agreements reached between Nepal and China earlier this year.

The previous government led by KP Sharma Oli signed some historic deals with China including agreements on importing petroleum products from the northern neighbor as well as the transit and transport agreement that allowed Nepal an access to a seaport.

"I immediately accepted the proposal from Prime Minister Pushpa Kamal Dahal for this post," Poudyal said while answering lawmakers' queries at the Parliamentary Hearings Special Committee (PHSC) held at Singha Durbar on Wednesday. "My priorities will be implementing the historic deals. I will earnestly work for the implementation of these agreements as these are going to be very crucial in opening up new prospects of development for Nepal."

The then Prime Minister Oli had signed a 10-point agreement with China during his week-long visit to the northern neighbor in March. The agreements signed by both countries were about Nepal-China transit and transport treaty, free trade agreement, exploration of gas and fuel, construction of Pokhara Regional International Airport, construction of a bridge along Nepalgunj-Hilsa road, installation of solar system at 32,000 houses, concessional loan agreement and opening of bank branches. The two sides also reached an understanding to build a strategic railway link between the two countries through Tibet.

He underscored on the need of Nepal taking maximum advantage from China which is emerging as the world's major economic power. "I will also focus on providing online visa for Chinese tourists that will attract a large number Chinese tourists to Nepal," he explained. He was confident that the number of Chinese tourists can be significantly increased by easing visa process and removing other hassles.

He further said that Nepal can take advantage by exporting our goods to the huge Chinese market for decreasing our trade deficit with China that is more than a billion rupees per annum.

Lawmakers Chinkaji Shrestha, Ananda Prasad Dhungana, Ganeshman Gurung, Chitralekha Yadav, Ashtha Laxmi Sakya asked him about his plan on implementing previous government's agreements. They also asked what are his ideas to increase export of Nepali products to the Chinese market, get help from China for infrastructure development and other sectors.

The PHSC also conducted hearings of Deep Kumar Upadhyay, who is recommended as ambassador to India, about his plans on making his tenure productive during his stay in New Delhi.

Some lawmakers asked him how he would prove his reappointment for the same post, from where he was earlier recalled.

"This time, my role will be to make things clear but not to further complicate the matters and I will definitely maintain my diplomatic values and duty," he said.

He claimed that no concrete evidence was furnished while recalling him in the past.

The committee has completed the hearings process for both the nominees. It has called next meeting to take decision about their endorsement for Thursday.

Since one-third of the total members of the committee can approve the nominees, they are certain to be endorsed because they were recommended by the ruling parties. The government had decided to recommend Poudyal and Upadhyay as Nepal's ambassadors to China and India respectively on September 1.