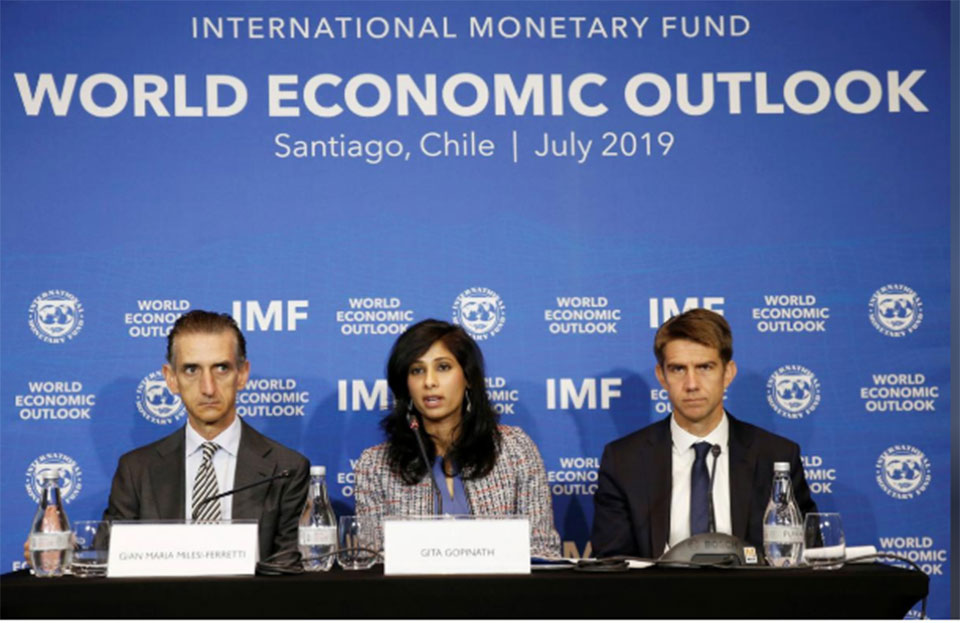 WASHINGTON/SANTIAGO, July 24:  The International Monetary Fund on Tuesday cut its forecast for global growth this year and next, warning that further U.S.-China tariffs or a disorderly exit for Britain from the European union could further slow growth, weaken investment and disrupt supply chains.

The IMF said downside risks had intensified and it now expected global economic growth of 3.2% in 2019 and 3.5% in 2020, a drop of 0.1 percentage point for both years from its April forecast, and its fourth downgrade since October.

The IMF slashed its forecast for growth in global trade by 0.9 percentage point to 2.5% in 2019. Trade should rebound and grow by 3.7% in 2020, about 0.2 percentage point less than previously forecast.

Trade volume growth declined to around 0.5% in the first quarter, its slowest pace since 2012, it said, with the slowdown mainly hitting emerging Asian countries.

Global trade volumes fell 2.3% between October and April, the sharpest six-month decline since 2009, when the world was in the midst of the Great Recession, according to estimates by the Netherlands Bureau of Economic Policy Analysis (CPB).

The global economy was at a “delicate junction” and countries should refrain from imposing tariffs to address bilateral trade imbalances or to solve international disagreements, IMF chief economist, Gita Gopinath, said at a news conference in Santiago, Chile.

“A major downside risk to the outlook remains an escalation of trade and technology tensions that can significantly disrupt global supply chains,” she said, repeating the IMF’s estimate that tariffs imposed in 2018 and new tariffs threatened in May could reduce total world economic output by 0.5% in 2020.

Other significant risks included a surprise slowdown in China, lack of recovery in the euro zone area, a no-deal Brexit and an escalation of geopolitical tensions, she said.

“We do not have a recession in our baseline, but ... there are significant downside risks,” she said. “The recovery relies on recoveries in stressed emerging and developing economies, and so there is significant uncertainty around that.”

Gian Maria Milesi-Ferretti, deputy director of the IMF’s research department, told Reuters that a move by Washington to slap tariffs on the remaining $300 billion of its Chinese imports, would be “very costly” for both countries, as well as affect supply chains throughout Asia.

The United States could offset the impact of cost increases by turning to alternative sources for a limited set of imports, he said.

“But if you impose tariffs on the entire set of imports from a country the size of China, you cannot just shift demand to goods produced by other countries. Which implies that this is going to be more costly for the United States.”

Weak trade prospects were creating headwinds for investment, and business sentiment was particularly pessimistic about new orders, although sentiment in the services sector had proven resilient, bolstering employment and consumer confidence.

Other risks, including tensions in the Persian Gulf, had picked up in recent months, and civil strife in many countries raised the specter of “horrific humanitarian costs, migration strains ... and higher volatility in commodity markets.”

The IMF said growth was better than expected in advanced economies like the United States, and one-off factors that had throttled growth in the euro zone were fading, as anticipated.

At the same time, activity across emerging market and developing economies in Asia was disappointing, and second-quarter indicators for China suggested weaker activity there, the IMF said.

Escalating U.S. tariffs and weakening external demand were pressuring China’s economy, which was already in the midst of a structural slowdown. China’s economy was now expected to grow 6.2% in 2019 and 6.0% in 2020, a 0.1 percentage point drop for each year, the IMF said.

The IMF also cut its forecast for growth in emerging markets and developing economies to 4.1% in 2019 and 4.7% in 2020. It slashed the forecast for Latin America and the Caribbean downward by 0.8 percentage point to just 0.6% in 2019, reflecting downgrades to the forecasts for Brazil, Mexico and Argentina. Venezuela’s economy was expected to shrink about 35% in 2019.

Russia also had a weak first quarter, the IMF said, revising downward its forecast for economic output in the Commonwealth of Independent States by 0.3 percentage point to 1.9% in 2019.

Slower global growth and the drop in inflation across advanced and emerging market economies had revived the risk of disinflation, the IMF said, warning that missteps in macroeconomic policies could have a severely debilitating effect on sentiment, growth and job creation.

The fund urged countries to work at the multilateral level to reduce trade tensions and end uncertainty about the status of longstanding trade agreements between Britain and EU, and the United States, Mexico and Canada.

What we saw at Teku Hospital (photo feature)
7 hours ago
Oppn parties fail to secure majority seats in parliament to form new govt, Oli likely to be reappointed as new PM
5 hours ago

Where to contact if someone needs Remdesivir?
16 hours ago
Sagarmatha sees first deaths of 2021 expedition
15 hours ago

What we saw at Teku Hospital (photo feature)
7 hours ago