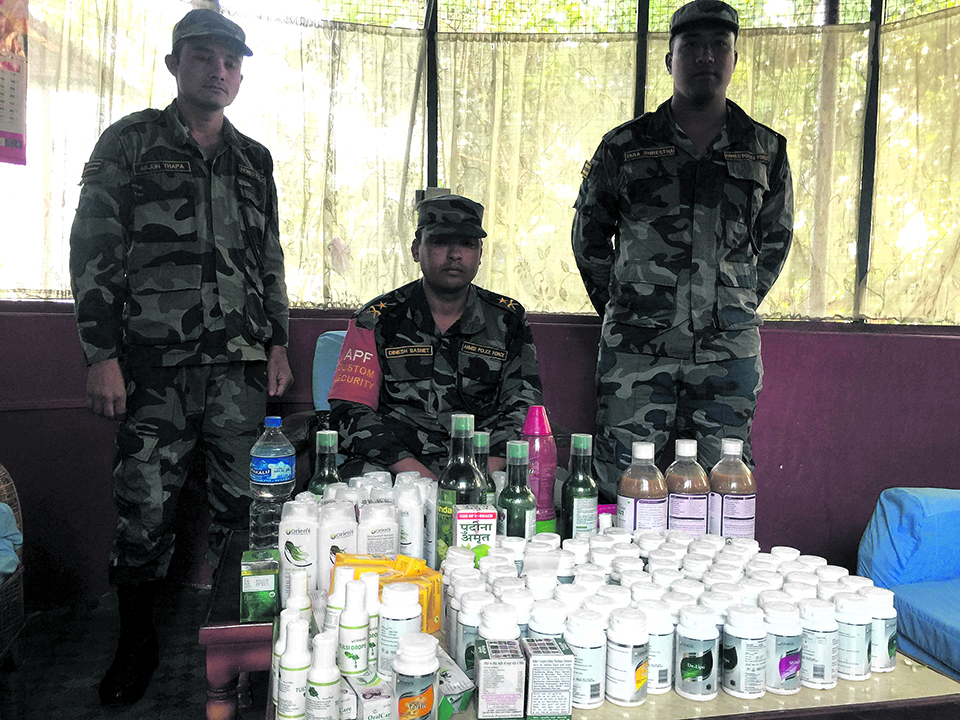 JHAPA, Feb 15: Indian networking businesses, which earlier eased money, drugs and human trafficking, are now being used as medium to import illegal medicines from India and marketing them in Nepal.

“Most of the individuals who were earlier involved in various Indian networking businesses are now smuggling and selling restricted medicines in Nepal,” said DSP Tanka Prasad Bhattarai. “These medicines are smuggled into Nepal from several border points as the companies' manufacturing those drugs are not allowed to test or sell their products in Nepal,” he added.

Bhattarai further added that most of the drugs smuggled and sold using the networking business model are related to weight loss, sexual enhancement and chronic diseases.

“These networkers target people who want to lose or gain weight, want to enhance sexual performance or want to cure chronic diseases. Since proper medicines for such matters are not available, they are doing brisk business by tricking people into buying those products by becoming member of the network,” Bhattarai added.

Earlier we did not want to be members of the network. But when we met the network representatives we realized that there was no harm in selling products that were quite in demand. -   A network member from Dhulabari

As Bhattarai claimed, the drugs are indeed doing huge business as these networks are penetrating deeper into the rural areas. In lack of monitoring, many retail shops are displaying and selling such drugs in remote corners of village. Considering the lure among people for having such drugs, more and more people becoming members of the network. Some of the members, who talked to Republica, claim that the offers made by the network representative are irresistible to turn down.

“I did not want to become a member. But the network representatives approached me and told me the benefits I would get after becoming a member of the network. They promised that apart from getting the products free or at lower rates, I could also join their other networking business. So I later changed my mind and became their member,” said a local from Dhulabari of Jhapa on condition of anonymity, as he is aware being a part of networking business is illegal.

There are many others like him in the village. Many have become member of such networks just because they have been told that the business is going to expand further in the future and benefit them immensely. These people have been found to have sold medicines personally and through other means. According to a member, again from Dhulabari, the networking representatives are very convincing and that it is very hard to turn down their offers.

“Earlier we did not want to be members of the network. But when we met the networking representatives we realized that there was no harm in selling products that were quite in demand,” he said adding that many kinds of medicines brought for digestion, weight loss and gain and increased libido are in high demand.

Some of the drug companies involved in the network business lure people for working hard to promote the network and increasing its membership base by offering jobs in their company headquarters. Some of the network members who were arrested by police, shared that they gave up their plans to work in gulf countries after they received assurances of job in India from the networking company. “Members of the network are promised high paid jobs in India cities if they reach certain sales and membership targets. They are brainwashed by the network representatives to such an extent that they completely believe of having a better future if they work hard for the network,” Bhattarai said.

Police 'doing its best' to dismantle the networks

Bhattarai shared that the police department is doing everything possible to dismantle the network businesses and restrict business of uncertified drugs. Efforts have been concentrated to restrict smuggling of such products at the Kakadvhitta border. “There are other agencies which are also involved in checking smuggling of such goods into the country. But, as a front line agency, we are also doing our best to restrict the flow of such drugs into the country,” he said.

Locals, who are involved in such networks, however, defend that they are bringing nothing but 'food supplements'.  Even though the police claims to have been taking action against it, these members claim that they are doing even 'brisker business' than before.

Elaborating on the difficulties involved in restricting the drugs, Bhattarai, many individuals act as if they are the patients themselves and are in need of the drugs they carry. “Even though they cannot show us medical certificates, they plead that the products are for their personal or relatives' use. In such case, we often leave them on humanitarian grounds. However, if they are caught with huge quantities, we do not buy their arguments,” Bhattarai said.

In the last three months, Nepal Police has confiscated 3 million rupees worth of such products from the Kakadbhitta border and handed over to the custom office.

KATHMANDU, July 21: A joint squad of the Department of Drug Administration and the Narcotics Control Bureau of Nepal Police... Read More...