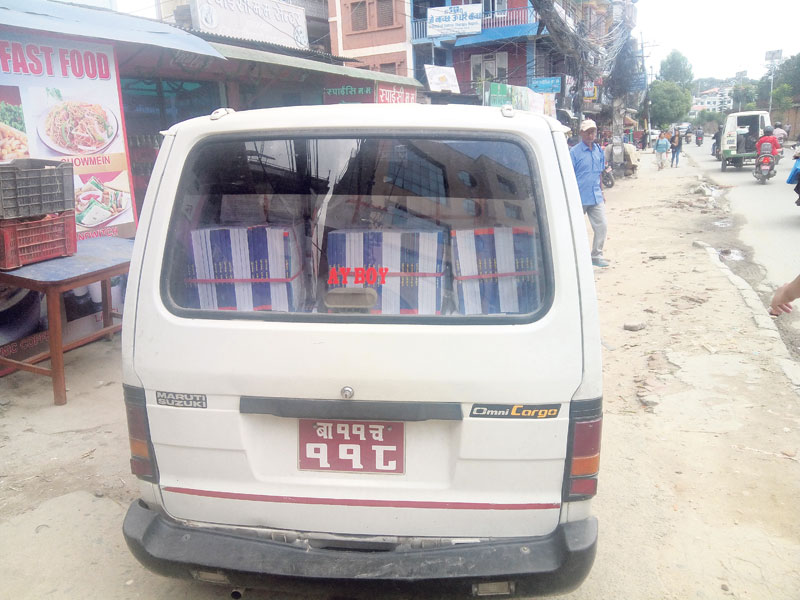 Copies of Sabaiko Nepali textbook being whisked away from Oxford International at Anamnagar to an undisclosed location Tuesday afternoon. Photo: Republica

KATHMANDU, Aug 1: It has been found that hundreds of copies of Sabaiko Nepali, a school textbook, printed under the Sajha Prakashan logo, were removed on Tuesday from the private book shop named Oxford International owned by Dolindra Prasad Sharma, chairman and general manager of Sajha Prakashan.

After news reports about the illegal printing and distribution of the book prescribed for Grades XI and XII were published in Republica and Nagarik dailies recently, the copies of the textbooks were whisked away from Sharma’s private shop located at Anamnagar, Kathmandu, to an unknown place.

The Ministry of Education has formed a probe panel to look into the irregularities and illegal publication of books under the Sajha logo. Officials at Sajha Prakashan have raised serious concerns over the illegal book printing and demanded market inspection.

Republica has the evidence of the textbooks being whisked away to other places. However, GM Sharma claimed that he had supplied 1,500 copies of the textbook as demanded by a book seller.

Sharma further said that he doesn’t know much about the bookshop as his wife handles it, contradicting his own statement of having provided the books to a bookseller.

Though the sale of the books published by Sajha Prakashan has gone down since he assumed the Sajha office, the books printed under the Sajha logo are sufficiently available in the market. Sajha Prakashan printed 63,000 copies of Sabaiko Nepali this year but it distributed only about 3,000 official copies of the books in the Kathmandu valley which has more than 50 percent of the nearly 450,000 Grade XI students across the country. The sale of the books from Sajha outlets in other districts is also reported to have gone down.