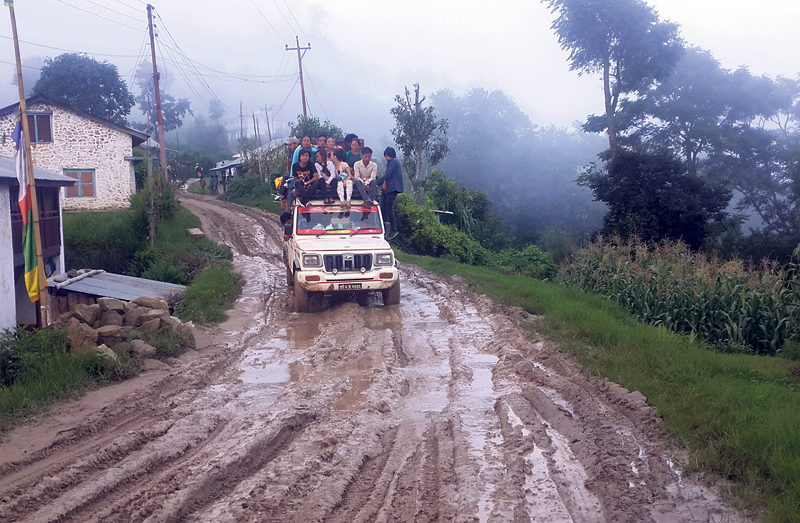 A vehicle loaded fully with passenger travels through Hile-Uttarpani-Chhintang road in Dhankuta in this recent photo. (Siddharaj Rai)

DHANKUTA, Aug 11: In the last few years, lots of new road tracks have been opened in the Koshi region. Only a few of them are in proper condition and the concerned department has provided route permit only for few of them. However, public and private vehicles have been plying on most of the roads without permits. Due to lack of monitoring, transporters are running their businesses risking hundreds of lives everyday in the name of transportation services.

Acting Chief district officer of Dhankuta, Somnath Bhattarai admitted that the problem is prevalent in over one dozen of roads in the district. Since the last three decades, buses, cars and jeeps have been passing through several roads in Dhankuta without route permit. “Though it is not legal, vehicles have been plying without permit in more than one dozen of roads for a long time,” Bhattarai said. He added that nobody seems to be concerned over the issue.

Extremely overloaded vehicles are commonly seen playing through long distance rough roads such as Hile - Leguwa, Bhedetar - Maharani, Rajarani - Maunatbudhuk Mulghat - Triveni, Hile - Aakhisalla and Jorpati - Kajimane, among others, in Dhankuta. According to Bhattarai, the district office has recommended to provide route permit for Hile - Pakhirbas, Chann - Budhabare and Krishule-Hattikharka road sections. “We have sent letter to the road department to provide route permit for those roads. However, poor road conditions and haphazard driving remain major factors behind accidents,” he said.

Route permit has been not provided for 656 kilometers of road section in Tehrathum district. Despite that vehicles ply regularly on this road though it is full of ditches.

It has been 11 years; vehicles are plying in Basantapur, Chainpur, Khandbari and Legula roads of Sankhuwasabha. According to Mohan Mani Ghimire, assistant chief district officer, route permits for plying vehicles along these roads are yet to be issued. “We are preparing to provide road permits for these roads. The permits will be issued after discussing the issue with the district transport management committee,” he said.

As per provision, vehicles are not allowed to ply on roads until and unless the department of road issues permission for the route. If the office of the road department is absent in any district, District Administrative Office does the job in coordination with other stakeholders. Coordinated by the concerned CDO, local association of transport entrepreneurs, District Development Committee, technical experts of municipality and engineers decide route permit for any roads.

Most of the roads that link to the hills in the Koshi region have not obtained route permit, though both public and private vehicles are quite common in those routes. Despite the fact being a general knowledge, the district administration office and other stakeholders remain silent to it.

Since the vehicles that ply on the roads that don't have route permit, they don't pay taxes to the government. Along with charging travel fares to travelers as they wish, the also remain outside the government tax net. Dozens of vehicles ply through the number of such roads in the Koshi region.

According to Itahari office of Koshi Zonal Transport Management, public vehicles have to pay Rs 222 for every traveling up to 50 kilometers on a permitted road every four month. Vehicles that carry goods pay Rs 420 in tax to the government for traveling the same distance on a road for which road permit has been issued. In case of the roads without route permits, vehicles are simply not allowed to get through. “There is no provision of charging tax to the vehicles which ply on the roads without route permit,” said Ramesh Dahal, chief of Koshi Zonal Transport Management Office.

Accidents in the roads that have not obtained permit are equally ignored. Transport Management Office does not offer any help in such situation. However, some insurance companies have been providing support even in such conditions. “And this kind of coordination by the companies have actually encouraged the transport entrepreneurs to avoid legal provisions,” said Dahal.

Though passengers complain of unjustifiable fare in the routes, Rajan Niraula, secretary at Koshi Bus Entrepreneur Association, claims that the 'service is given in reasonable fair'. “In such dangerous hilly areas, we cannot operate buses by charging government prescribed travel fare,” he said.

A vehicle loaded fully with passenger travels through Hile Uttarpani Chhintang road in Dhankuta in this recent photo. Authorities have not issued route permit for plying vehicles along this road.

Transport operators freed after agreeing to operate under Companies Act

KATHMANDU, May 7: The government on Sunday released all transport operators arrested in the past two days from various parts of... Read More...

Dozens of mayoral aspirants from big parties in Koshi hills