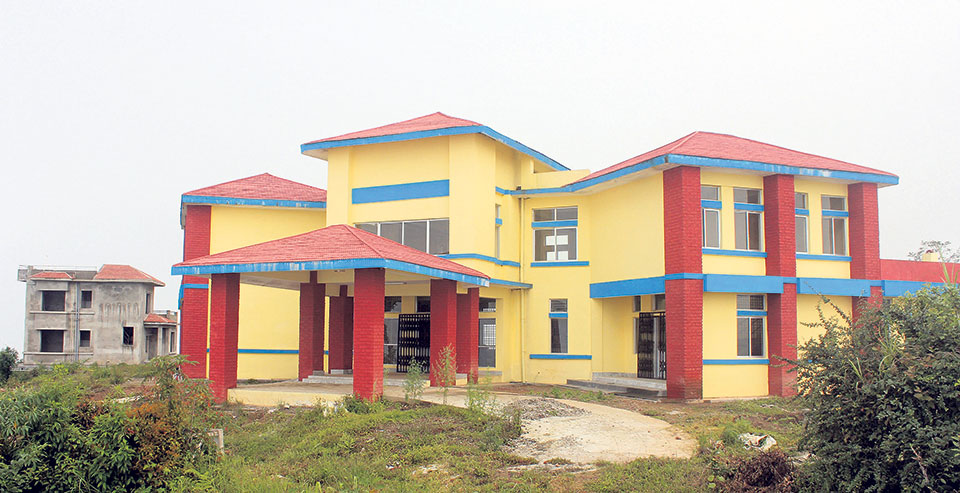 ILAM, Nov 2: Technical education was always one of the greatest demands of Ilam residents. Lack of employment after the completion of formal education had inspired them to demand for the establishment of institutions that provide skill oriented education.

The institute named Ratna Kumar Bantawa Polytechnic Institute is built at the cost of Rs 100 million and is located in Sakhejung village of Palap. CTEVT claimed that the institute will be very rewarding for the locals in the long run. Though its syllabus has only a few choices now, there is a long list of subjects to be incorporated. In the days ahead, courses related to farming, stitching, interior decoration, building construction and so on are expected to be incorporated.

“As this is the first year, we are facing some challenges. One of these is the lack of skilled teachers for some subjects,” said Abmika Prasad Gautam, president of the institution’s core committee while also expressing confidence that in the days ahead they will hire all the required teachers. “Students from many neighboring districts have enrolled at the college. The demand is going to be even greater in future.”

In the first year, the institute has got 23 students from Ilam, Panchthar, Jhapa, Dhankuta and Taplegunj, among other districts.  “Students have come even from Dharan and Seti zone. This is very much exciting. Many others have been contacting us for admission. Such institution was in fact a long demand of people,” Gautam said, adding that technical education is a great prospect for villagers in rural parts as they lack strong financial standing to finance their children’s education in cities.

“In remote areas, families cannot afford quality education for their children. And on top of it, youths are under pressure to start earning at the earliest. Institutions like this are therefore very much beneficial for youths and their families,” he elaborated. He added that such institutions will ensure the promotion of agriculture and cottage industries. “And that is the need of the time,” he noted.
The college is seeking teachers for botany and geography along with some other technical subjects. It is easy to get teacher for English, Nepali and Mathematics. But skilled human resource for modern technologies related to agriculture, forestry and cottage industries are hard to find, officials at the institute said.

Gautam states that the stay and education are affordable for the students at the institute because of the lower prices of food and hostel facilities. Parents have to pay hefty amount for their children’s education and stay if they send them to cities, but now they will be able to educate their children at home and that too at a meager cost, he claimed.

“The charges vary according to the course. For instance, for three years agricultural course, a student has to pay Rs 162,500 in total. This also covers their hostel and food expenses. From the total, Rs 10,000 is security deposit and will be refunded to the student at the end of the course,” he informed.

The polytechnic boasts of 426 ropanis of land. And that was willingly provided by locals, because they were excited about having the biggest technical institution in their locality. After getting the land, CTEVT constructed necessary infrastructure as per the wish of the locals. Gautam said that construction of the institution in the area was made possible due to mutual effort of the locals and CTEVT. “So far, five buildings have been constructed. More are on the way,” he said. “We have plans to make it not just big but also the best polytechnic institute in the eastern region and in the entire country,” he added.

The institute has buildings for library, veterinary and sheds for cows and buffaloes. Construction of a power house, canteen, and separate hostel buildings for girls and boys, among others, are underway.

Gautam said that there has been huge demand for courses related to information technology and civil health and shared that the institute will be availing those courses in the near future.

It took around a decade of efforts and lobbying in building the institute. While the project was basically led by Gautam, local parties and civil society leaders fully supported the initiative throughout these years. Jhalanath Khanal, former Prime Minister who was born in the same village, provided 55 ropanis of land. Gautam has given 18 ropanis, Gyanuram Katuwal gave 15 ropanis and Basu and Chandra Basnet jointly gave 30 ropanis.  Apart from them, there are many locals who have provided one and two ropanis of land for building the institution.