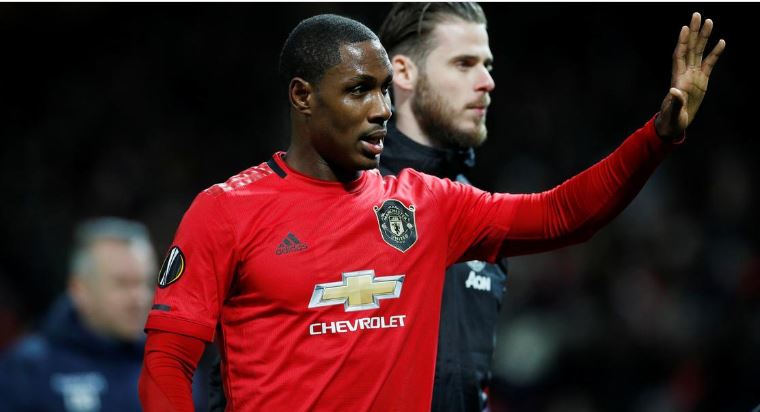 MANCHESTER, Feb 28: Odion Ighalo dedicated his first goal for Manchester United to his sister who died in December, as coach Ole Gunnar Solskjaer described the Nigerian as a “natural striker” after a 5-0 win over Club Brugge in the Europa League on Thursday.

The 30-year-old Nigerian, who took a pay cut to seal a loan move to Old Trafford from China’s Shanghai Shenhua last month, tapped home midfielder Juan Mata’s pass in the first half of their last-32 second leg.

“As a fellow striker myself, I know how important that first goal is and he’s been close a couple of times,” Solskjaer, whose side were 6-1 winners on aggregate, told reporters.

“You can see he sniffs goals, he wants to be there, where it sometimes hurts. That goal, he was sharp in his head and as that ball is played over to Juan, he spins and was on the six-yard line when Juan puts it there. That’s a natural striker.”

After celebrating his goal, boyhood United supporter Ighalo, lifted his shirt to reveal a vest with photograph of his late sister Mary Atole who died suddenly on Dec. 12 at her home in Canada.

"She was a good United fan too. We hoped for this moment but now I'm at United, she's not here to see what is going on," Ighalo told the club's website here

“It’s emotional. I have promised myself that every goal I score, I’ll dedicate it to her. She’s up there watching me.”

Ighalo, who is on loan to United until the end of the season, looks sure of more game time as fellow forward Anthony Martial was a last-minute absentee from Thursday’s match due to injury and is a doubt for Sunday’s Premier League game at Everton.

United are also missing striker Marcus Rashford with a back problem.