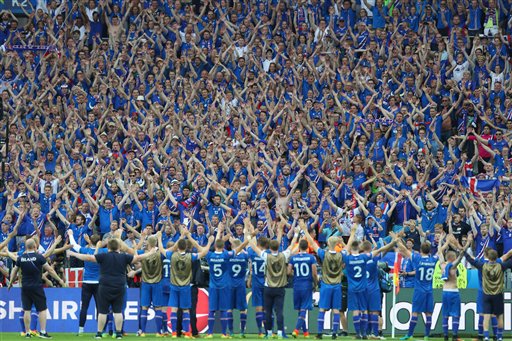 SAINT-DENIS, France, June 22: A late winning goal. A spot in the knockout stage. The prospect of playing in the round of 16 against England.

It just doesn't get better for Iceland.

Delivering the feel-good story of the European Championship, the smallest nation ever to compete at the tournament beat Austria 2-1 Wednesday to advance from Group F.

And the reward from the greatest day in Iceland's soccer history: A match against their heroes from England in Nice on Monday.

Arnor Ingvi Traustason clinched the win for Iceland in the fourth minute of stoppage time, finishing off a counter-attack as the Austrians piled forward in search of the goal that would have earned them a place in the round of 16 at the expense of their opponents.
Iceland finished in second place in the group, above Portugal and unbeaten with five points.

Austria was eliminated in last place, failing to live up to its billing in France.

"Maybe the expectations have been too high," Austria coach Marcel Koller said.

Iceland's victory at the Stade de France didn't come easy. The team spent much of the game on the defensive after striker Jon Dadi Bodvarsson gave Iceland the lead in the 18th minute, pouncing on a flick-on from Arnason at a throw-in and wrong-footing goalkeeper Robert Almer with an angled shot.

Austria defender Aleksandar Dragovic struck the post with a penalty in the 37th after David Alaba was tugged back, and Iceland repelled a succession of attacks before Alessandro Schoepf equalized in the 60th.

For the final 30 minutes, Austria was camped in the Iceland half, with Arnason standing out for Iceland with two crucial blocks off goal-bound shots.
No such despair for Iceland.

Hallgrimsson even said, jokingly, that Iceland might change the date of its national holiday — June 17 — to commemorate its soccer team's greatest feat.
"That's what it means to us," he said.