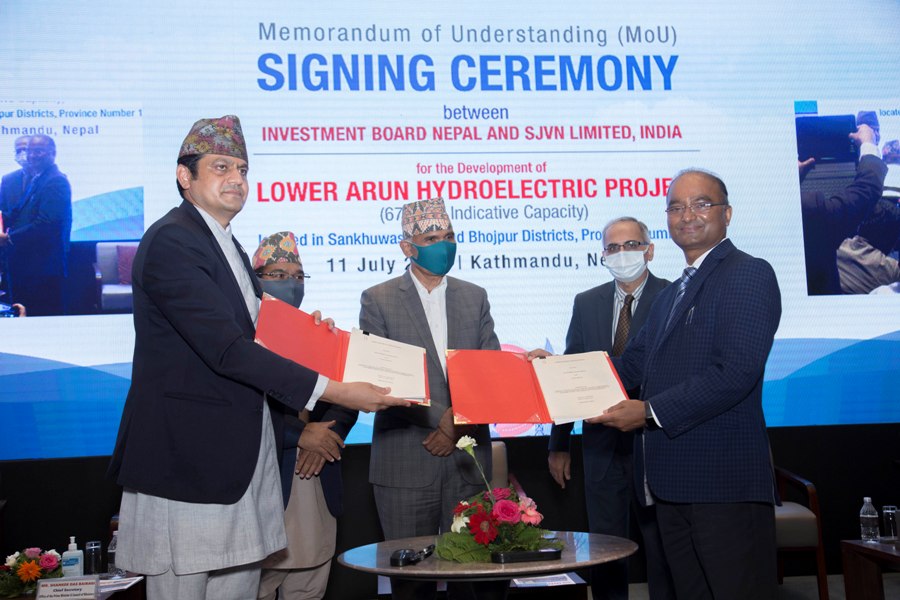 KATHMANDU, July 12: The Investment Board Nepal (IBN) on Sunday signed a memorandum of understanding with SJVN Limited, India, to conduct a detailed project study of the 679 MW Lower Arun Hydroelectric Project.

IBN chief executive officer Sushil Bhatta and Managing Director of SJVN Limited Nanda Lal Sharma inked the agreement to the effect. As per the agreement, the developer will have to present a detailed project report within the next two years to the IBN.

The peaking-run-off-river type project will require an estimated investment of US $ 1.30 billion. The 46th meeting of the IBN held in last January decided to award the contract to the Indian company under the build, own, operate and transfer (BOOT) model as a public-private-partnership.

“It is a milestone achievement to construct a mega project that facilitates a green development project in BOOT model at the time the climate change is being a major concern globally,” a press statement issued by the IBN quotes its CEO Bhatta as saying.

Lower Arun Hydropower Project is one of the major projects the government showcased at the Investment Summit held in March 2019. India expressed its interest after Chinese state-owned company, Power China, retracted to construct the project.