I’m thankful and I’m going to show it 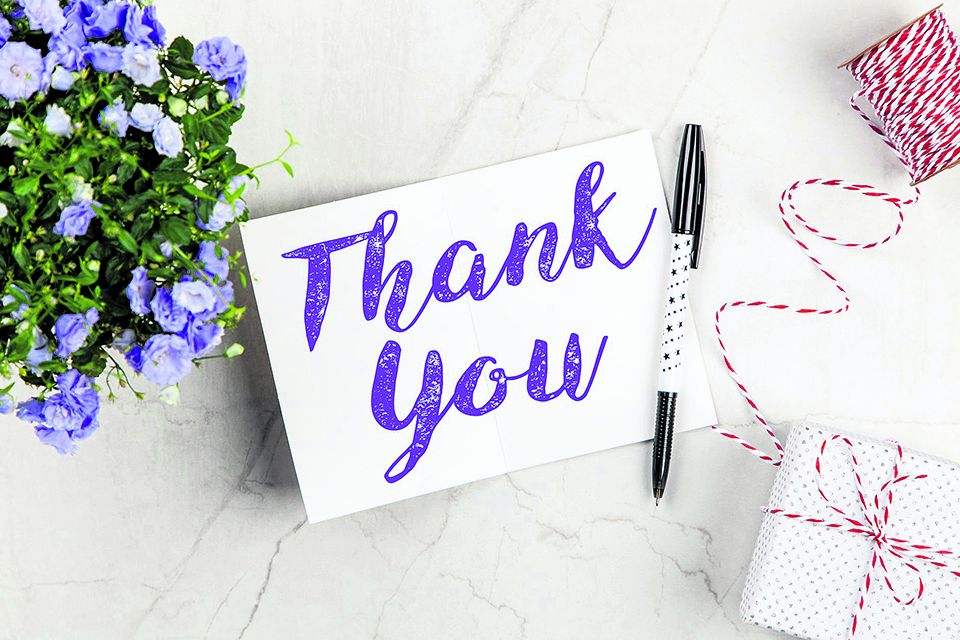 I don’t think I’m exaggerating when I say that the “thank you” culture is yet to develop and become a norm here in Nepal like it should be. Whether it’s when your mother passes you the dinner plate or when a server brings you a glass of water or your food at a restaurant, we tend to forget to thank them. We think that is what they have always done or it’s their work and that there is no need for special appreciation. But that’s where we are wrong. A simple “thank you” can make someone’s day while ensuring you get better responses and reactions from those around you.

Last year I worked as an intern for an online book selling service based in Kathmandu. Every time we got a call or an online order, I had to talk to people who wanted to buy a book or two and, for some reason, people who were polite and courteous were the ones I always remembered and I took extra care in making sure I reciprocated their kindness. It was something about the way they carefully framed their words that instantly made me like them. And that translated to them getting better service, at least from me.

However, this is not to say that those who were rude to me never received the books on time or that their orders were canceled (after all, a rude customer is still a customer), it’s just that I felt this sense of enhanced duty to make things as easy as possible for people who had taken the time to thank me. I wanted to make sure their books were delivered to their doorsteps and that they didn’t have to face any hassle whatsoever during the process.

Ever since then, I have always been aware of the importance of saying “thank you”. And I’ve come to realize that saying “thank you” (sometimes even when you aren’t all that thankful) goes a long way. For example, at a restaurant, for you, it’s about enjoying a meal and sitting there for an hour or two but for your server, it’s serving hundreds of people throughout the day. So, saying “thank you” when he or she brings your food might give him/her a sense of recognition and trust me, with these two words, you will be on top of their list of priorities. He/she will be quick to refill your glass of water and give you extra napkins before you ask for them.

I have come to realize that it’s even more rare for people to use the Nepali equivalent of “thank you” (which is “dhanyabad”). And for this very reason, to me, “dhanyabad” somehow feels even more courteous. For example, I might blurt out a “thanks” to a person who opens the door for me but my “dhanyabad” is reserved for a more intense setting like someone gifting me a Miles Davis album. I really appreciate it is what my “dhanyabad” usually means. It comes from the heart.

In our culture we rarely thank one another even though we are grateful to have received the help. If we were to think, how many of us can recall our elders thanking us when we brought them a glass of water or made them a cup of tea? And how many of us feel comfortable while taking the time to verbally thank our parents for a present? Some might say that thanking someone in this case is really redundant because there is no need for verbal gratitude in a setting as close-knit as a family. But this is where I beg to differ – we mustn’t assume that the other person knows we’re thankful. We must learn to say it. We must tell them that they are appreciated and that their actions mean a lot to us.

You might argue that saying “thank you” isn’t the only way to show that you are grateful. We can also return the gratitude by helping them some other time or by doing something nice for them rather than just mumbling a few words of thanks. But what about that exact moment? If your friend helps you with your homework right before a test, are you planning to return the gratitude next semester? Saying thank you isn’t just about being grateful, it’s about acknowledging and respecting the effort made by another person for your benefit. It’s saying, “Hey, I see you have done something for me and I acknowledge that.”

Expecting a “thank you” because you helped someone may sound a little selfish but let’s accept the fact that humans will kill for a sense of validation from people they have helped in a world that constantly reminds them how meaningless their lives are. However, if we continue expecting recognition or thanks for every nice thing we do, it’s safe to say we are going to be left disappointed. Therefore, it’s better to say “thank you” in the smallest of situations without expecting another “thank you” in return. This way, we will be playing our part as a kind and polite person while the rest around us catch up.

Moreover, most of the time, the people who deserve most of our gratitude go unnoticed. We are used to their care and favor so much that we tend to dismiss them as routine. Little things like thanking your mother or father for making dinner or thanking your sister or brother for doing the laundry are just as important. Often times, when we do things for others we tend to take it as a burden but when the person acknowledges the trouble you have taken for him/her, the task doesn’t seem as burdensome as before. It’s a good feeling to have and to be able to evoke that same feeling in others is also a nice thing.

KATHMANDU: Echos of Cha-Cha-Hui have faded in major areas of the Kathmandu Valley. With festivity celebrations kept on low profile... Read More...

If you’re looking to learn more about Nepal’s culture and the different kinds of languages spoken here, you might be... Read More...