I'm not as delighted as I was: PM Oli 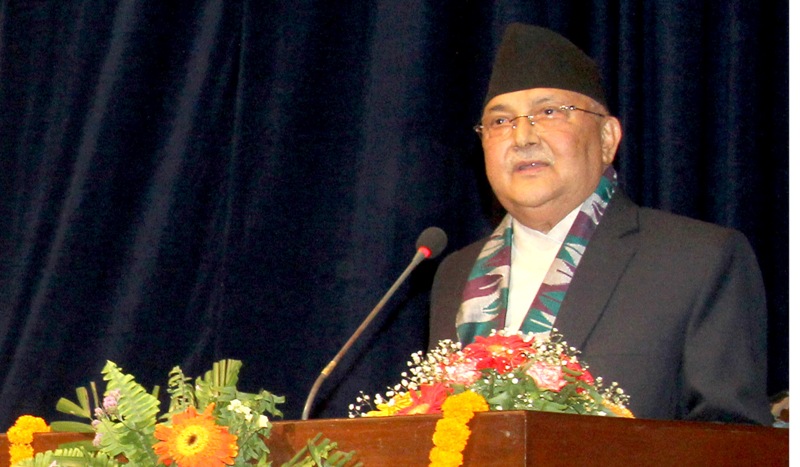 KATHMANDU, July 14: Prime Minister KP Sharma Oli has said he was not as delighted as he had been in the past Asar 29 - the birthday of Adikavi Bhanubhakta Acharya, reasoning that more than 40 persons lost their lives in the rain-caused disasters across the country of late.

At a program organized to confer various national awards on the occasion of the 206th birth anniversary of Adikavi Bhanubhakta Acharya, PM Oli, who is also the Minister for Culture, Tourism and Civil Aviation, said, "Although I was disheartened much today, I am attending it because it was already scheduled program." He further informed that he was engrossed on how the rescue and distribution works could be intensified.

PM Oli reminded that 'serwe bhawantu sukhina ….' was envisioned from the very era of the rishi-munis and it has now become the national aspiration. For it to get fulfilled, as he said, Nepal was rich in resources. The objective of prosperity would be achieved with the utmost use of communications, transportation, and other infrastructures, he stressed.

At the program organized by the Ministry, PM Oli further said, "We need to contribute to society before we depart. Bhanubhakta Acharya, Motiram Bhatta, Lekhanath Poudel, Laxmi Prasad Devkota, Balkrishna Sam, Dharanidhar Koirala, Siddhicharan Shrestha, and other literary figures contributed to their times. On the occasion, Minister of State for Culture, Tourism and Civil Aviation, Dhan Bahadur Budha and Chancellor of Nepal Academy, Ganga Prasad Upreti honored 42 literary figures selected with due procedure.

Moreover, Chairman of Bhagat Sarbajit Memorial Foundation and lawmaker Chhabi Lal Bishwokarma informed that the award named after Bhagat Sarabjit was set up in 2072BS. Jitendra Deo Giri, who was honored with the Mahakavi Devkota Children and Folk Literature Award, commented that the Award gave fresh energy to him for further creation. The program was organized to confer the National and State Talent Award, Mahakavi Devkota Award, Bhagat Sarbajit Human Value National Award and Gopal Prasad Rimal National Award for 2075BS.

KATHMANDU, June 17: Prime Minister KP Oli, who returned home after an eight-day European visit on Sunday, has said that he... Read More...