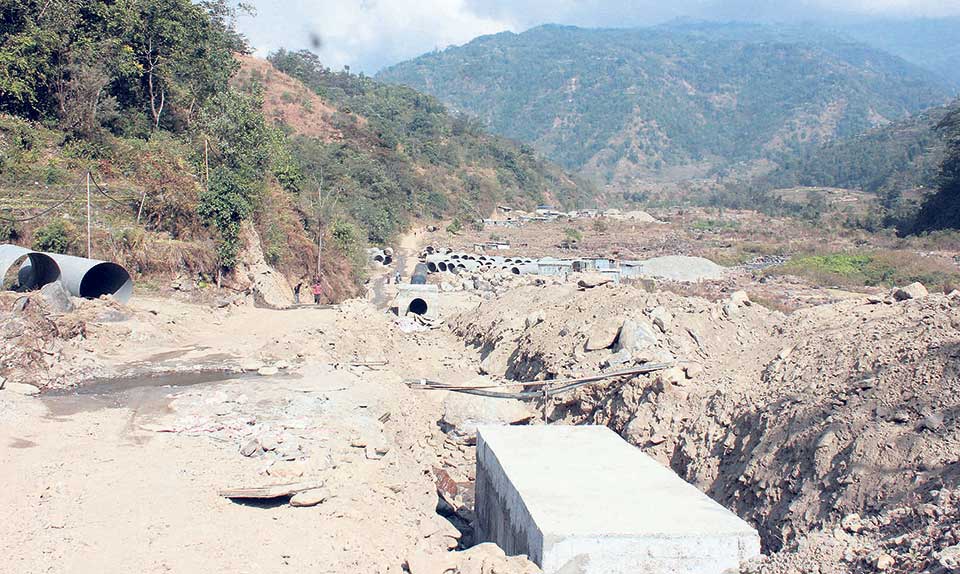 ILAM, Jan 7: Hydropower projects in Ilam have geared up construction works in recent years, whereas the existing ones have been continuously adding up electricity to the national power grid.

The construction works of Super Mai Hydropower, from Mai Khola river, are going on in full fledge at Ilam Municipality Ward 5 Barbote and Ward 2 Sumbek. The Rs 1.5 billion project is expected to add 7.8 megawatts of electricity to the national power grid by mid-June 2018.

The powerhouse and penstock pipelines are being constructed for the projects, according to concerned officials. After completion, the plant shall produce 47.39 GWh of electricity each year. The project construction site is situated nine kilometers from the district headquarters, the reservoir for silt deposit lies on Ward 2, and the powerhouse is situated at Ward 5.

A total 3,235 meters of pipeline with a diameter of 2.3 meters will be used to supply water to the powerhouse from the Maikhola River to be poured into a surge tank with dimensions of 7 meters diameter and 24 meters height.

The plant will be using a Francis Turbine with two horizontal axes of 3.9 MW capacities.

Currently, six hydropower plants in the district are producing electricity, which include Sanima Mai, Panchakanya, Himal Dolakha, Puwakhola, Puwakhola-1, and Jogmai hydropower projects. Besides these, cascade projects of Sanima and Panchakanya hydropower are also running.  However, the project officials have said that only a third of the installed capacity is being produced during the dry season of winter.

The 10 hydropower projects in the Kabeli corridor along Ilam-Panchthar-Taplajung have seen a decline in production, dropping from total installed capacity of 86.97 MW to 31.30 MW during winter. Sanima Mai, with the biggest capacity of 29 MW, is producing only 9.98 MW during winter. Likewise, production at Himal Dolakha project, capable of producing 4.5 MW, has been limited to 1.2 MW. Similarly, at Panchakanya Mai project that could harness 9.98 MW, only 3.7 MW is being produced.  Similar fall in production has been seen in other power stations, according to officials.

KATHMANDU, June 21: The Department of Electricity Development (DoED) has scrapped over 150 survey licenses of hydropower projects having capacity of... Read More...