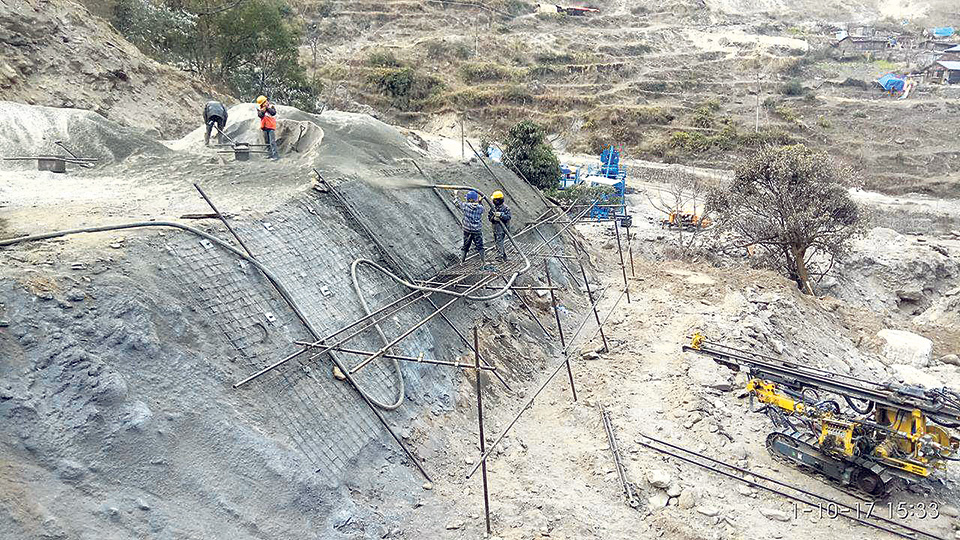 RASUWA, August 28: Rasuwa is not the most developed district in Nepal, but it is prospering of late.

Many settlements of the district were reduced to rubbles in the immediate aftermath of catastrophic 7.8 magnitude earthquake that shook the country on April 25, 2015. Yet, the residents there, most of whom are dependent on tourism, have risen back from the rubbles, challenging the obstacles present in their path. Among many factors, under-construction and operational hydropower projects in the district have played an important role.

Hydropower projects in the district have not only contributed to infrastructure development, but also provided the locals with employment opportunities. This has made an important contribution to development and thereby brought positive changes in the locals’ lifestyles.

“But on the other hand, hydropower projects are constructed in rural areas where there is not much access to infrastructures. Such projects have to develop infrastructures in the areas they are centered on. That is why hydro projects deliver immense benefits to the locals,” he added.

Likewise, hydropower projects offer 10 percent shares to the locals. The shares directly contribute to establishment of small enterprises, which have proven to be a backbone to economy development in the rural areas of the district.

Norchen Tamang, a local of Gosaikunda Rural Municipality-5, purchased shares of Chilime Hydropower Project after learning about it from the neighbors. At first, he did not believe it would be profitable but invested in 50 kitta of shares anyway. Only later did he realize how profitable the investment was.

“The investment proved to be highly profitable. This investment has enabled me to repay my loans and also helped me to cover education expenses of my children,” said Tamang.

Before purchasing shares of the hydropower project, his family used to depend on agriculture. At present, Tamang has cleared most of his previous loans and is feeding his family by operating a hotel, which is run by his six-member family.

“Before opening the hotel, I used to struggle to even pay the interest, let alone pay off the loan. The income I generate now has drastically changed my family’s lifestyles. It easily helps me to cover household expenses and education of my children. It is all thanks to Chilime Hydropower Project,” he added.

According to him, the money from the share of hydropower has also been used in other sectors apart from the hotel. “I have invested in vehicle, house and lands by trading the shares.”

Similarly, Tsewang Tamang of Shyapru also trades on shares of hydropower and it has benefited him greatly. “I purchase shares when the price drop and sell it when their price increases,” said Tsewang, who now owns 900 kittas of shares.

“So far, I have not invested in other sectors. I have been making my livelihood solely through trading the shares of hydropower projects,” he added.

As per their capacity, locals have been engaged in those projects as laborers, manager, deputy manager, civil engineer, electronic engineer among other fields. Even those who were contemplating on joining foreign employment have changed their minds after they got employment opportunities at home.

According to Sunil Regmi, administrative executive of Sanjen Hydropower Project, their project has directly employed 120 people while over 400 other people indirectly benefit from it.

Seven other hydropower projects in the district, currently under-construction, are expected to significantly boost the country’s electricity capacity. Upper Trishuli ‘A’ (216 MW), Rasuwagadi (111 MW), Trishuli 3A (42.5 MW), Sanjhen (42.5 MW), Upper Sanjhen (14.8 MW), Langtang Khola (10 MW) and Upper Mailung Hydropower projects are currently under construction. Most of those projects are expected to be completed within two years.

Out of 11 micro hydro- power projects in Parbat, 8 no longer in operation

PHALEBAS ( Parbat), Dec 3: Many of micro hydro-power projects based in rural parts of Parabat, eight are not in... Read More...