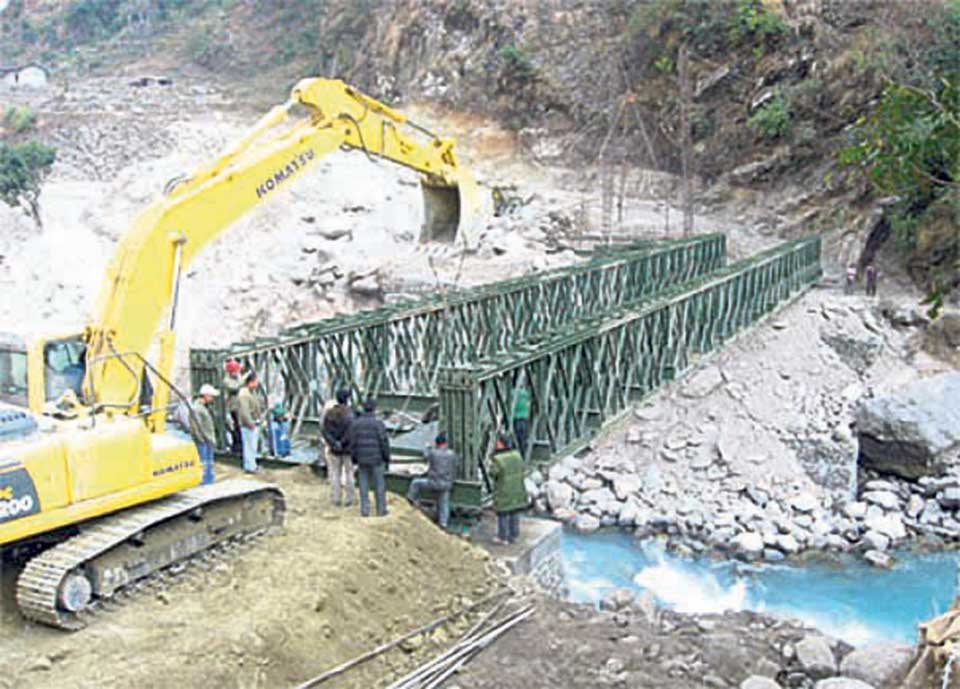 DOLAKHA, Nov 15: Officials of Upper Tamakhoshi Hydropower Project are worried that delay in hydro mechanical works of the project by an Indian contractor will prevent it from meeting the construction deadline.

Frustrated with the work pace of Indian firm Texmaco, the project authority is mulling over assigning some of the hydro mechanical works to another contractor to ensure that the project is completed in time.

Project officials say that they expect the hydropower project of 456-megawatt capacity to start test generation by mid-July next year. The much-awaited project is expected to be a game changer for the country as the supply of the energy from Upper Tamakoshi is expected to end the reliance on Indian imports.

Nepal is currently importing over 350 MW of electricity during peak hours from India to meet the shortfall of energy.

As the delay by the Indian firm risks pushing the deadline further, the project officials are now considering to hand over remaining hydro mechanical works to another contractor of the project.

The national pride project had awarded civil, hydro mechanical, electro mechanical and transmission line works to four separate contractors. Of the four contractors, the work progress of Texmaco has been very slow, according to the project officials.

However, the contractor has been dawdling, citing various reasons. For example, it has been saying that it is facing difficulty in transport pipes due to delay in widening of Lamo Sanghu-Jiri road. It also maintains that some pipes are still being manufacturing in Kolkata, India.

The project is preparing to hand over the remaining hydro mechanical works to Andritz Hydro -- the electro mechanical contractor of the project. The company has already been assigned to carry out re-inspection of the pipes installed by Texmaco.

Bigyan Prasad Shrestha, chief of the project, said that they were considering assigning remaining works to another contractor to complete the project in time. “Almost all works are reaching the final stage. You can rest assured that the test transmission of electricity from this project will begin from mid-July next year and commercial generation of the electricity from mid-November next year,” he said.

The project has been paying interest up to 12 percent per annum for loans taken to build the plant.

Clashes between UML, Maoist Center cadres kill one in Dolakha

DOLAKHA, May 10 : A man succumbed to injuries after cadres of the CPN-UML and CPN (Maoist Center) clashed at... Read More...

One drowned in floods in Dolakha

DOLAKHA, July 23: Chandra Bahadur Thami, 35, a resident of Lapilang VDC-7 died after being swept away by the Bhadrawati... Read More...