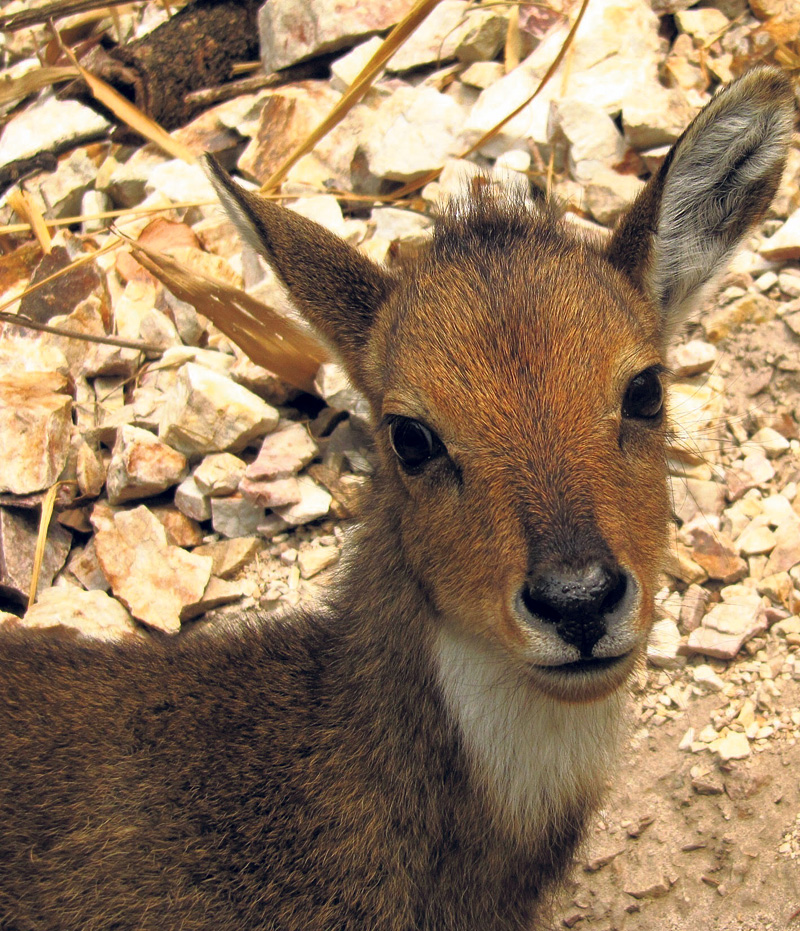 A goral fawn in the jungle of Nawalparasi in this recent picture. Photo Courtesy: Mahabharat Biodiversity Conservation Committee

Considered a masculine trait in past, hunting is now seen as an inhuman act

NAWALPARASI, Dec 10: Himalayan gorals, one of the charms of Mahabharat mountain range, used to be widely hunted by locals in the past. Meat of these innocent animals would lure hunters to the forest. In those days finding hunters with guns on their back was not very hard.

Hunting was an essential part of the life- mostly that of a man. Families expected hunt during marriage and festival seasons, if not during the rest of the year.
“Hunters who succeeded in hunting gorals were considered brave and lucky. Apart from that your family would look at you for meat. And hunting wild animals was considered as a manly way to cater to your family’s need,” said Om Bahadur Ranamagar, a resident of Pokhari village, Nawalparasi. “However, the story has changed now,” he added.

And what has changed the story is the growing awareness towards conserving wildlife and with that people’s growing love for the adorable creature.  “In the past scores of hunters would be seen in the mountains. You wont find them anymore,” he said.

Ranamagar, a hunter himself in the past, has hunted many gorals in the past. For his wedding party, he had gone into the jungle with a friend to hunt gorals. “For my wedding I was looking for goral that would weigh around 25 kg at least. After a long wait, we were able to hunt such a one.

But now I realize that it was a wrong thing to do. I should not have hunted the beautiful animal to celebrate my wedding,” he said while stating that back in those days awareness about preserving wild animals was not present in him or his peers.

Now, Ranamagar is not only sorry for the past, but is also determined to do his best to conserve gorals. As an active member of a local wildlife conservation committee, he tries to do everything for saving the animal from human predators.

“In those days we believed that hunting was part of the masculine tradition. And of the preys, goral was the first choice. People largely depended on hunting for meat. So, people would hunt in groups- sometimes small and sometimes bigger.”

The day after Buddha Jayanti would start the hunting festival, he informed. Residents would form hunting groups and head out for the hunt into the jungle. “It was believed Ban Jhankri (spirit of the jungle) would be busy worshipping Lord Buddha and that would give the hunters undisturbed opportunity to hunt,” he explained. “In the presence of Ban Jhakri, it was thought that hunting was difficult.”

Elaborating on the need for hunting in groups, Ranamagar said that hunting as part of a group was easy for cornering and hunting gorals and other wild animals. Young or pregnant gorals would be hunted without any discrimination. “As young and pregnant gorals were also hunted rampantly, the population of gorals was significantly reduced. Some year back you would rarely see any gorals in the jungle,” said Nurachandra Pandey of Deurali.

Due to initiatives taken by government and non-government agencies, awareness for preserving gorals and other wildlife species began to increase. This awareness slowed down the tradition of hunting, Pandey said.

“Most of the hunters stopped hunting gorals around 2006. Though their population has since started to grow, it is not as big as it used to be in the past,” he added.

Subbachandra Lungeli Magar, a hunter back in his youth, expressed remorse for all the hunting he did along with his peers. “We would carry guns and run after gorals in the jungle for days. Sometimes we would kill 3 / 4 gorals in a single hunting session,” he said adding remorsefully that “had we not hunted them in such a way, they would be still part of our jungle. It was very inhuman thing to do.”

Growing concerns of the depleting goral population brought the hunters together a decade back. “We launched coordinated efforts for goral conservation a decade back when the Kali Gandaki highway - linking Palpa and Nawalparasi district- was under construction with the formation of the Mahabharat Wildlife Conservation Committee (MWCC),” Humanath Pandey informed.

Gorals are mostly found in the forests of Hupsekot, Deurali, Dhauwadi, Naram, Ruchang and Jhirubas in Palpa and mountainous areas of Nawalparasi district. Locals in these areas have been running home-stay services for mountain and wildlife loving tourists.

‘Become the best version of yourself’

KATHMANDU, May 23: Rupy’s International School organized prize distribution ceremony to felicitate the students of its senior wing, on Tuesday. The... Read More...

The Lake City is planning to ban unnecessary use of horn in the city area from July 16. The ‘No... Read More...