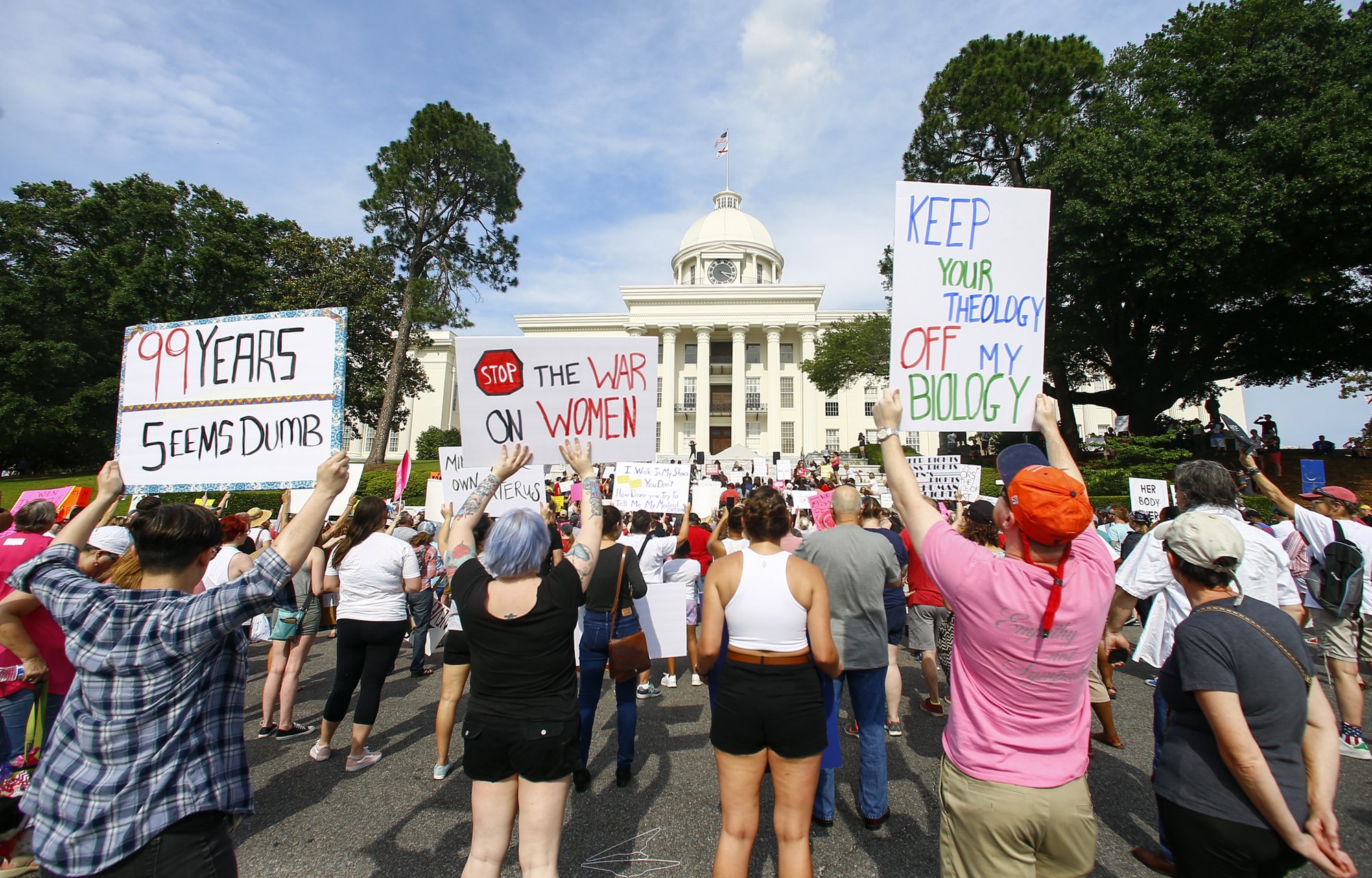 Protesters for women's rights hold a rally on the Alabama Capitol steps to protest a law passed last week making abortion a felony in nearly all cases with no exceptions for cases of rape or incest, Sunday, May 19, 2019, in Montgomery, Ala. (AP Photo/Butch Dill)

MONTGOMERY, May 20: Hundreds of demonstrators marched to the Alabama Capitol on Sunday to protest the state’s newly approved abortion ban, chanting “my body, my choice!” and “vote them out!”

The demonstration came days after Gov. Kay Ivey signed the most stringent abortion law in the nation— making performing an abortion a felony in nearly all cases unless necessary for the mother’s health. The law provides no exception for rape and incest.

Alabama is part of a wave of conservative states seeking to mount new legal challenges to Roe v. Wade, the 1973 landmark Supreme Court decision that legalized abortion nationwide. Governors in Kentucky, Mississippi, Ohio and Georgia have approved bans on abortion once a fetal heartbeat is detected, which can happen as early as the sixth week of pregnancy.

None of the laws has actually taken effect, and all are expected to be blocked by the courts as the legal challenges play out with an ultimate eye on the Supreme Court.

Marchers on Sunday said the measures have energized supporters of legalized abortion, and they say they are digging in for a legal and political fight. Along the route they took, the protesters passed by scattered counterdemonstrators raising signs against abortion.

Two speakers at the rally on the Capitol steps shared their stories of having an abortion, including a woman who came out of the crowd to describe the abortion she had after being raped at a party at age 18.

Carrying an orange sign with a coat hanger and the caption “No Never Again,” 69-year-old Deborah Hall of Montgomery said she remembers life before Roe and can’t believe the push to return there.

“I had friends who had illegal abortions and barely survived,” said Hall, who for a time ran a clinic in Montgomery that provided abortion, birth control and other services.

“I still cannot believe it. It’s really a scary time for everybody,” she said of the push to overturn Roe.

Similar demonstrations were held in Birmingham and Huntsville on Sunday.

Amanda Reyes, who runs Yellowhammer Fund, a nonprofit that provides funding to help low-income women obtain abortions, said donations have begun streaming in since passage of the Alabama bill.

Groups this week paid for a small plane carrying a banner “Abortion is Okay!” to circle the Capitol and the Governor’s Mansion.

The Alabama law would make it a felony, punishable by up to 99 years or life in prison to perform an abortion. There would be no punishment for the woman receiving the abortion.

But the protest outside the Capitol Sunday comes in a state where a majority of voters recently agreed to put anti-abortion language in the Alabama Constitution. Fifty-nine % of state voters in November approved the constitutional amendment saying the state recognizes the rights of the “unborn.”

Abortion ban aims for high court, but won’t get there soon

WASHINGTON, May 16: Alabama’s virtual ban on abortion is the latest and most far-reaching state law seemingly designed to prod... Read More...