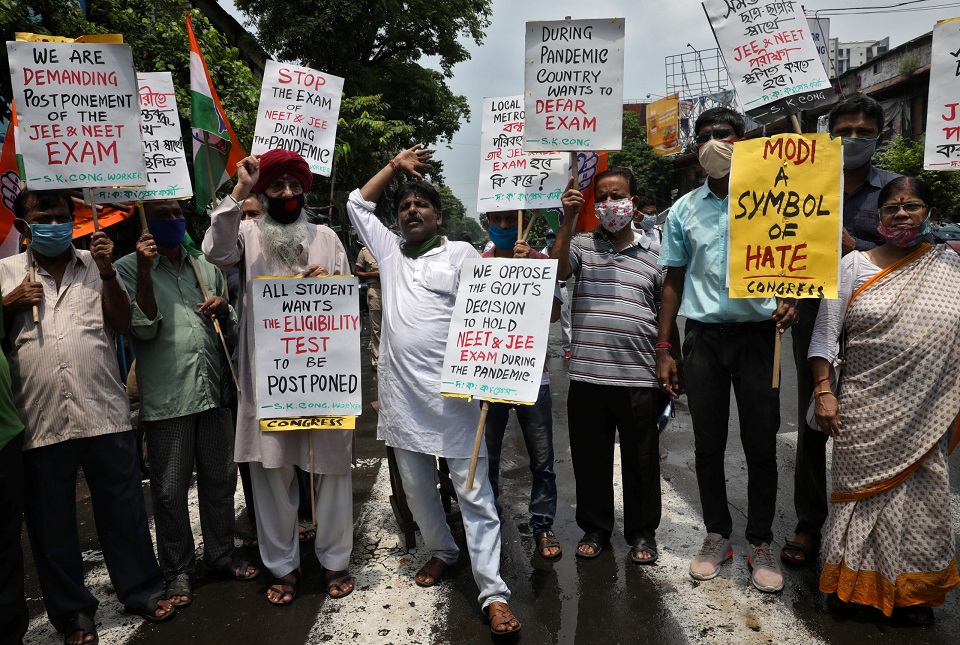 MUMBAI, Aug 29: Hundreds of masked protesters demonstrated in major Indian cities on Friday against a government plan to hold exams for millions of students during the coronavirus pandemic, as the daily tally of infections hit a record.

The health ministry reported 77,266 infections, taking the nation’s tally to 3.3 million, with a toll of 61,529 deaths. India, with the most infections in Asia, has posted the highest single-day increase worldwide every day since Aug. 7.

“Stop the exam during the pandemic,” read one placard carried by protesters in the eastern city of Kolkata, while others scuffled briefly with police in the western industrial city of Ahmedabad.

More than 2.4 million students are set to take tests next week for admission to medical and engineering schools, which the federal government has declined to defer, despite growing pressure from students and opposition parties.

“It’s important that the government listens to students,” Rahul Gandhi, a leader of the opposition Congress party, said in a video on social media, as he urged no compromises on the safety of students.

Usually held in April and May, the exams have already been postponed twice this year.

But some students want another delay, for fear of rising infections as well as difficulty travelling to exam centers because of virus-linked curbs on transport and lockdowns in some places.

As infections unfurl outwards from crowded cities into sprawling rural areas, health officials have launched the second round of a nationwide survey to assess the spread.

It will screen for antibodies in 28,000 people across 70 districts, yielding results by late September, said Manoj Murhekar, director of the National Institute of Epidemiology.

“The survey will tell us what proportion of the rural population is also exposed to the virus,” he added.

India to resume export of Covishield vaccines from next month, neighboring countries to get first priority
6 hours ago