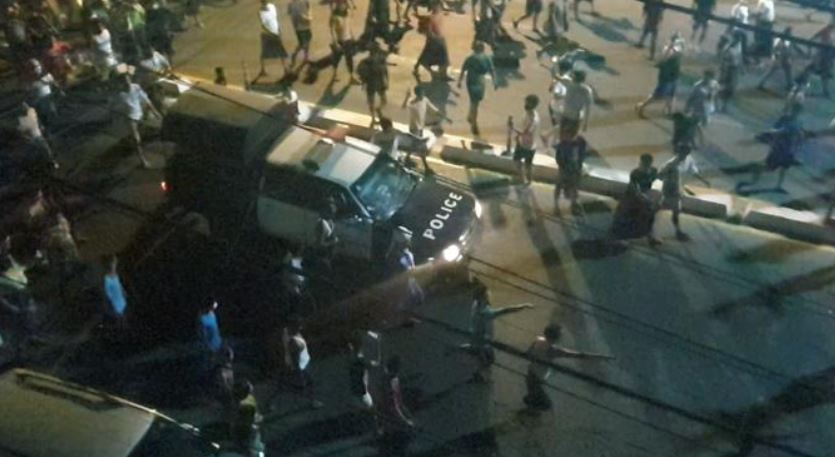 People surround a police vehicle as they protest against the military coup, in Yangon, Myanmar February 12, 2021 in this still grab obtained by Reuters from a video on February 13, 2021.

MYANMAR, Feb 14:  Hundreds of thousands of protesters took to the streets in Myanmar for a ninth day of anti-coup demonstrations on Sunday, as the new army rulers grappled to contain a strike by government workers that could cripple their ability to run the country.

Trains in parts of the country stopped running after staff refused to go to work, local media reported, while the military deployed soldiers to power plants only to be confronted by angry crowds.

A civil disobedience movement to protest against the Feb. 1 coup that deposed the civilian government led by Aung San Suu Kyi started with doctors. It now affects a swathe of government departments.

The junta ordered civil servants to go back to work on Saturday, threatening action.

But hundreds of railway workers joined demonstrations in the commercial capital Yangon on Sunday, even as police went to their housing compound on the outskirts of the city to order them back to work. The police were forced to leave after angry crowds gathered, according to a live broadcast by Myanmar Now.

Soldiers were deployed to power plants in the northern Kachin state, leading to a confrontation with protesters who said they believed they intended to cut off the electricity to carry out nightly arrests.

“The military tried to control the electricity power sources since yesterday,” said Awng Kham, a local politician. “They might be able to control the power during the night while they are doing their business at night.”

Several power departments in Yangon said in Facebook posts that they would refuse to cut the power and expressed support for the protesters.

“Our duty is to give electricity, not to cut,” said one staffer, who asked not to be named for fear of retribution, adding that some of his colleagues were participating in the strike.

The government and army could not be reached for comment.

Richard Horsey, a Myanmar-based analyst with the International Crisis Group, said the work of many government departments had effectively ground to a halt.

“This has the potential to also affect vital functions – the military can replace engineers and doctors, but not power grid controllers and central bankers,” he said.

Hundreds of thousands of people protested across the nation after a fearful night as residents formed patrols and the army rolled back laws protecting freedoms.

Engineering students marched through downtown Yangon, the biggest city, wearing white and carrying placards demanding the release of ousted leader Suu Kyi, who has been in detention since the coup and charged with importing walkie talkies.

A fleet of highway buses rolled slowly through the city with horns blaring, part of the biggest street protests in more than a decade.

A convoy of motorbikes and cars drove through the capital Naypyitaw. In the southeastern coastal town of Dawei, a band played drums as crowds marched under the hot sun. In Waimaw, in Kachin state, crowds carried flags and sang revolutionary songs.

Many of the protesters nationwide held up images of Suu Kyi.

Her detention is due to expire on Monday. Her lawyer, Khin Maung Zaw, could not be reached for comment on what was set to happen.

More than 384 people have been detained since the coup, the monitoring group Assistance Association for Political Prisoners said, in a wave of mostly nightly arrests.

“While the international community is condemning the coup, Min Aung Hlaing is using every tool he has to instigate fears and instabilities,” activist Wai Hnin Pwint Thon from the UK-based rights group Burma Campaign UK said on Twitter, referring to the military ruler.

Residents banded together late on Saturday to patrol streets in Yangon and the country’s second-largest city Mandalay, fearing arrest raids as well as common crime.

Worries about crime rose after the junta announced on Friday it would free 23,000 prisoners, saying the move was consistent with “establishing a new democratic state with peace, development and discipline”.

Tin Myint, a Yangon resident, was among the crowds who detained a group of four people suspected of carrying out an attack in the neighbourhood.

“We think the military intends to cause violence with these criminals by infiltrating them into peaceful protests,” he said.

He cited pro-democracy demonstrations in 1988, when the military was widely accused of releasing criminals into the population to stage attacks, later citing the unrest as a justification for extending their own power.

Also late on Saturday, the army reinstated a law requiring people to report overnight visitors to their homes, allowed security forces to detain suspects and search private property without court approval, and ordered the arrest of well-known backers of mass protests.

Suu Kyi’s National League for Democracy (NLD) won a landslide victory in a November election that the army said was tainted with fraud - an accusation dismissed by the electoral commission.