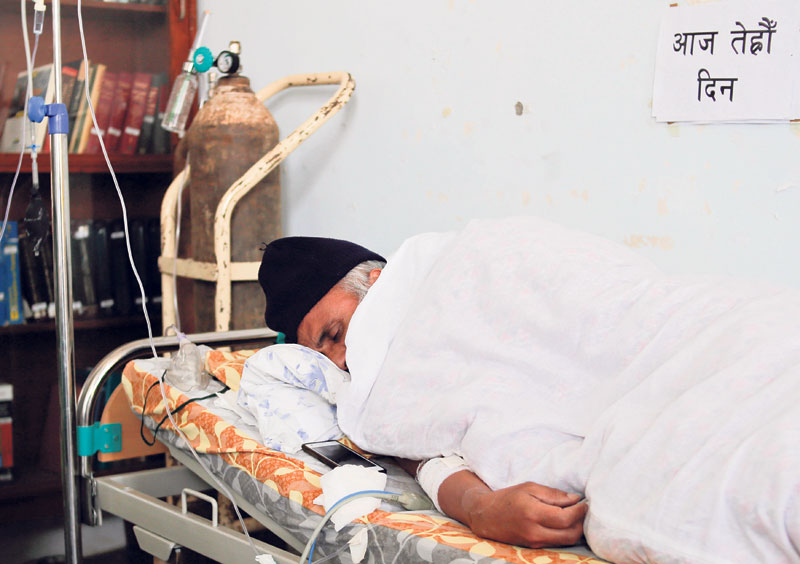 Dr Govinda KC on the 13th day of his fast-unto-death on the premises of the TU Teaching Hospital, Kathmandu on Friday. He has been demanding crucial reforms in the medical education sector. (Dinesh Gole/ Republica)

KATHMANDU, Nov 26: Hundreds of patients, who came for treatement at Tribhuvan University Teaching Hospital (TUTH), from different parts of the country were affected due to the out-patients department (OPD) boycott by the resident doctors at the hospital. The doctors boycotted OPD duty starting Friday in support of the ongoing hunger strike of Dr Govinda KC, who has been demanding crucial reforms in the medical education sector.

Ash Maya Majhi, 50, who came from Sindhuli, said that she came for a follow-up checkup but could not see her doctor. “I came here three days ago for a checkup. The doctor, who checked me, had called me for today for a follow-up checkup, but he was absent today,” said Majhi. “I am suffering from stomach and chest problems for a long time. As I could not see him, I had to buy a ticket for paying clinic at TUTH,” she lamented, adding that she does not know why her doctor didn't show up for duty.

About 2,000 patients from across the country visit TUTH every day for the quality care it provides at affordable rates.

“We boycotted the OPD duty today but attended to the emergency ward, in-patient department and surgeries,” said Dr Leison Maharjan, president of Nepal Resident Doctors Association. “Dr KC's condition is deteriorating by the day but the government has not heeded his demands. So we will continue our protests until Dr KC's demands are addressed,” he added. Dr KC's supporters and well-wishers staged a protest march from the IOM to the residence of the prime minister at Baluwatar on Friday.

The condition of Dr KC has deteriorated further on the 13th day of his hunger strike. Dr KC began his 10th fast-unto-death from November 13 after the Tribhuvan University apppointed Dr KP Singh as the dean of the Institute of Medicine (IOM) violating seniority.

Before starting the latest hunger strike, Dr KC had issued a ten-point demand that include a sack for TU Vice-chancellor Dr Tirtha Raj Khaniya, appointment of dean at IOM on the basis of seniority, implementation of previous agreements, halt to affiliation to any new medical colleges before the passage of the medical education bill by parliament, expediting the process to impeach suspended CIAA chief Lokman Singh Karki, investigation against CIAA Commissioner Raj Narayan Pathak, and implementation of the fee structure proposed by the Mathema Commission.

Meanwhile, Solidarity for Dr KC Alliance, a grouping of supporters of Dr KC, is all set to organize a protest rally at Maitighar of Kathmandu on Saturday. “We will stage a huge protest at Maitighar at 11 am tomorrow in support of Dr KC's strike,” said Dr Jivan Kshetry, president of the alliance.