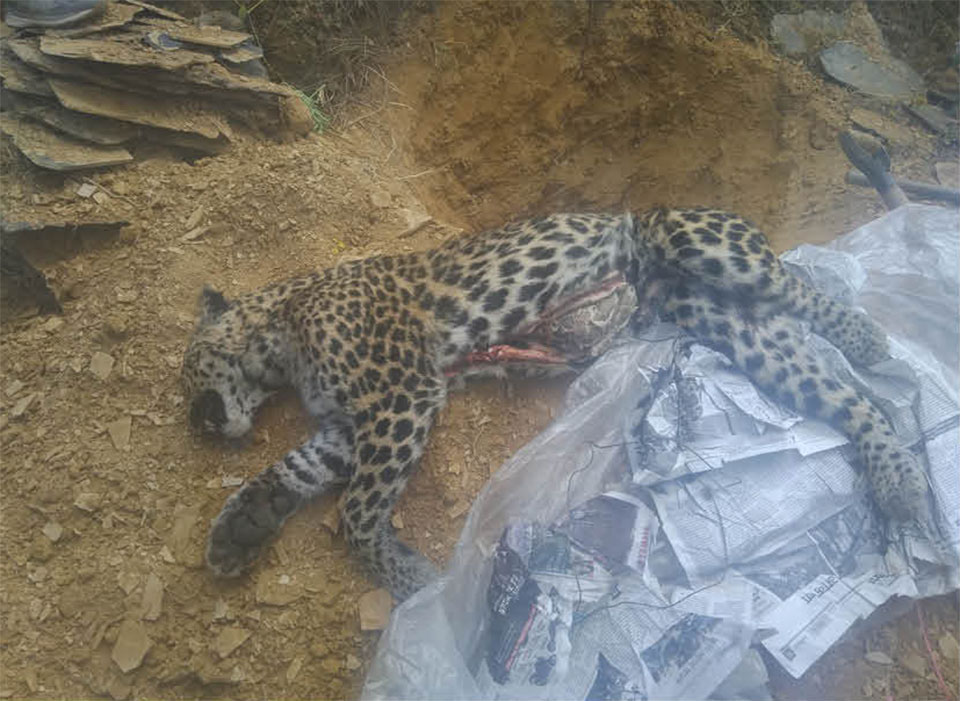 Forest officials burying a leopard, which died after getting stuck in a trap set by hunters.

BAITADI, Jan 12: It has been seven years since the people of Talloswarad of Baitadi district started walking in groups especially at night, fearing leopard attacks. Two persons died when a rampaging leopard strayed into a human settlement for the first time. So far, 23 people have lost their lives due to their attack while 12 have been injured.

However, no one has lost his or her life in past few years but surely has been injured. Mostly, it is the children who have lost their lives in leopard attacks. According to the police records, of the total 23 killed, 16 were children. In order to control "leopard terror", the District Administration Office (DAO), Forest Division Office (FDO) and District Police Office (DPO) have adopted various measures but they still failed to prevent the attacks.

Even the locals have taken several efforts to chase away the man-eating leopards but none of their efforts have been effective. Increasing wildlife and human conflict has resulted in the deaths of many leopards as well.

Last week, a leopard died near Sigas protected forest area after being stuck in a foot trap set by a hunter. Just a day ago, a leopard was killed in Dadeldhura, which is attached to Talloswarad. In August, two leopards were found dead, one each in Patan Municipality-5 and Pancheshwor Rural Municipality-6.

Likewise, in July, a female leopard was seriously injured after being stuck in a trap set for a porcupine in Melauli Municipality-2. Four days later, the rescued leopard was sent to the Bardia National Park (BNP).

In fiscal year 2017/18, five leopards died after they were stuck in the traps set by hunters and poachers. Ram Prasad Chaudhary, information officer at the FDO, informed Republica that three leopards have been trapped to death since August 2018. Afforestation and destruction of habitat is one of the major reasons behind the increasing deaths of leopards.

Leopards and boars have terrorized the people here, especially the locals living in Talloswarad. Despite numerous efforts by the police, locals and forest officials, human-wildlife conflict is getting more serious than ever. Locals here are compelled to kill leopards in order to protect themselves. Though the cases of human casualty due to animal attack are reported, the death of animals due to human attack is rarely reported, says Chaudhary.

There are altogether 352 community schools in Baitadi. Sadly, none of them have enough food and water resources for the survival of wildlife. This seems to be pushing them to extinction or compelling them to stray into human settlements.

TANAHU, Jan 14: A leopard which had been wreaking havoc in Bhanu Municipality for the last few months has been... Read More...

ADB revises estimated growth of Nepali economy to 4.1 percent in 2022
19 hours ago
Milk price rises in Arghakhanchi
59 minutes ago