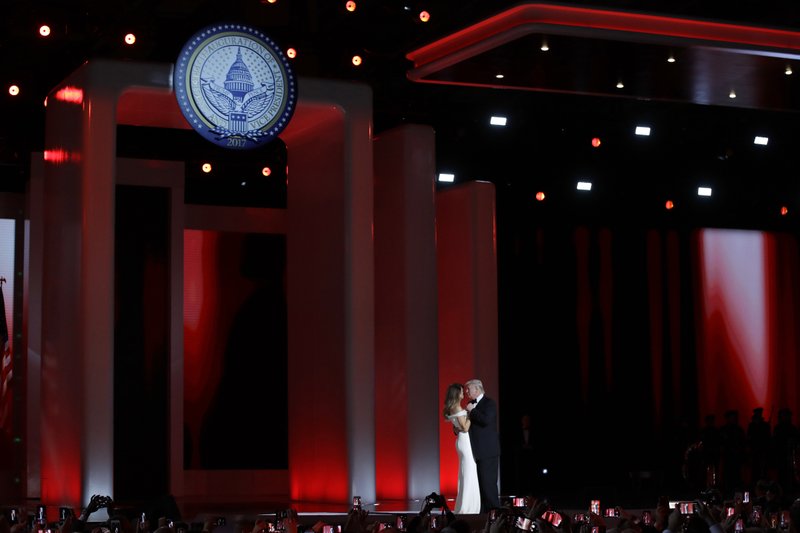 WASHINGTON (AP) — It was huge.

Big money from billionaires, corporations and a roster of NFL owners poured into Donald Trump's inaugural committee in record-shattering amounts — to pull off an event that was considerably lower-key than previous inaugural celebrations.

That leaves a bit of a mystery: What the $107 million was spent for and how much was left over — the excess, if any, to go to charity. It also raises a new round of questions about the influence of money in politics, this time for a president who promised to "drain the swamp" of Washington.

Contribution records from Trump's inaugural committee, released Wednesday by the Federal Election Commission, show the president who railed as a candidate against the corrupting influence of big-money donors was only too willing to accept top-dollar checks for his swearing-in festivities.

Trump's total take was about double the previous record set by Barack Obama, who collected $53 million in contributions in 2009, and had money left over to spend on the annual Easter egg roll and other White House events.

Trump's top inaugural donor was Las Vegas gambling billionaire Sheldon Adelson, who gave $5 million. He and his wife came away with prime seats for Trump's swearing-in ceremony on Jan. 20 and gained access to a private lunch with the new president and lawmakers at the Capitol. Phil Ruffin, another casino mogul and close friend of Trump, was among dozens of donors who gave $1 million each.

At least eight NFL team owners kicked in big money for the inauguration. Seven of them, including Patriots owner Bob Kraft, whose team won the Super Bowl and visited the White House on Wednesday, gave $1 million apiece. Kraft's donation came via his limited liability company.

Trump plans to name the New York Jets' Woody Johnson, one of those million-dollar donors, to be the country's ambassador to the United Kingdom.

Asked whether the president feels conflicted about his committee accepting so much corporate and wealthy donor money, spokesman Sean Spicer said Wednesday that financing the inaugural is "a time-honored tradition" and there are "a lot of people who really take pride in helping us show the world a peaceful transformation of power."

Brendan Fischer of the Campaign Legal Center, a nonprofit pro-transparency group, countered: "If you take Trump at his word that when political figures accept large amounts of money from corporate interests or special interests that they're indebted to those big donors, there's certainly reason to question what donors to Trump's inaugural committee might expect in return."

As is often the case with campaigns and inaugurations, some of the donations came from people doing business with the federal government.

Businesses that donated at the $1 million level included Bank of America, Boeing, Dow Chemical, Pfizer and Qualcomm. Companies also gave big in-kind contributions of goods and services, including nearly $500,000 in "vehicle expenses" from General Motors. AT&T made combined in-kind and cash donations of $2.1 million, and Microsoft's combined total was $500,000.

Casino mogul Steve Wynn donated entertainers and production work valued at $729,000 for the Chairman's Ball, where the band Alabama and Wynn's ShowStoppers performed, according to Wynn spokesman Michael Weaver.

Russian-America businessman Alexander Shustorovich also was among the $1 million donors to Trump's inauguration committee. The Republican National Committee refused a contribution from the U.S. citizen in 2000, citing news reports at the time that cautioned about his ties to Russian business. In more recent years, he's given money to the party, to 2012 candidate Mitt Romney, and to Senate Majority Leader Mitch McConnell, FEC records show.

Donations from foreign nationals are banned. But the socialist administration of Venezuelan President Nicolas Maduro made a $500,000 donation through Citgo Petroleum, a U.S. affiliate of Venezuela's state oil company PDVSA. PDVSA recently offered up a nearly 50 percent stake in Citgo as collateral for a $1.5 billion loan from Russian firm Rosneft. The deal drew criticism from Republicans who worry it sets the stage for Vladimir Putin to take control of American oil.

The inauguration offered donors who had held back during the presidential campaign a chance to show belated support for the incoming president.

While the government sets strict contribution limits on political campaigns, the only federal restrictions on donations to inaugural committees are a ban on foreign nationals, according to Fischer, of the Campaign Legal Center. Past presidents-elect have tended to set voluntary limits on their inaugural fundraising, but Trump's only restriction was to ban money from lobbyists, he said.

Obama in 2009 set a $50,000 cap on individual contributions and banned money from corporations, political action committees and lobbyists. He lifted those caps in 2013, when he raised about $43 million for a lower-key event.

Inaugural committees have broad leeway in how they spend their money and what they do with the leftovers, although some limitations apply, according to Fischer. As a 501(c)(4) organization, for example, the committee could use some of the money to give bonuses to staff, but IRS rules say the committee couldn't operate primarily to benefit a small group of individuals. Federal campaigns wouldn't be able receive the money because it was raised outside contribution limits, he said.

Trump's inaugural committee has promised to "identify and evaluate charities that will receive contributions left from the excess monies raised."

Infographics: What are Trump's views on China?