Huawei founder says US sanctions not his toughest crisis 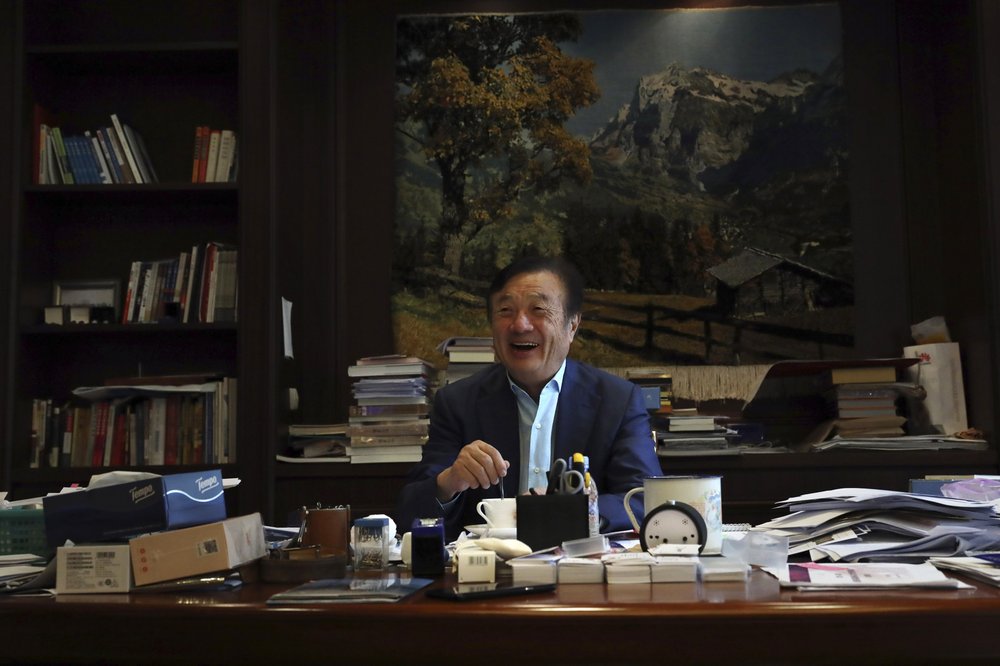 In this Aug. 20, 2019, photo, Huawei's founder Ren Zhengfei stirs his coffee as he reacts to visitors at his office on the Huawei campus in Shenzhen in Southern China's Guangdong province. Ren says its troubles with President Donald Trump are hardly the biggest crisis he has faced while working his way from rural poverty to the helm of China’s first global tech brand. (AP Photo/Ng Han Guan)

SHENZHEN, CHINA, Nov 8:  For decades, Huawei founder Ren Zhengfei stayed out of sight as his company grew to become the biggest maker of network gear for phone carriers and surpassed Apple as the No. 2 smartphone brand.

Now, Ren is shedding that anonymity as Huawei Technologies Ltd. mobilizes against the latest threat to its success: U.S. sanctions and warnings that it is a security risk.

The billionaire entrepreneur embroiled in the Trump administration’s fight with China over technology is a 75-year-old former army engineer who worked his way out of childhood poverty. He has survived competition that drove Western rivals out of the market, brushes with financial disaster and job stress so severe he contemplated suicide.

He sees American pressure as just the latest in a string of tests that have hardened him and his company.

“For three decades, Huawei has been suffering and no joy,” Ren said in an interview. “The pain of each episode is different.”

There is a personal dimension to the latest episode: Ren’s daughter, Huawei’s chief financial officer, is under arrest in Canada on U.S. charges she helped to violate sanctions against Iran.

Ren and his company already have spent nearly a decade fighting U.S. accusations the company might facilitate Chinese spying. The Trump administration stepped up pressure this year by imposing curbs on sales of U.S. technology to Huawei and urging European and other allies to shun the company as they prepare to roll out next-generation telecom networks.

The escalating clash with Washington has transformed Ren from an admired but rarely seen businessman worth an estimated $3 billion into one of China’s most prominent figures.

He belongs to the generation of entrepreneurs who founded communist-era China’s first private companies in the 1980s. They navigated a shifting, state-dominated landscape, overcoming shortages of money and technology to create industries that are now expanding abroad.

Despite his success, Ren talks like a struggling rookie, worrying aloud that employees might get too comfortable.

He writes letters urging employees to “prepare for the worst,” said Nicole Peng of Canalys, an industry research firm.

“He is still quite important in dictating that urgency,” Peng said. “He talks about survival all the time: Make sure to survive.”

Ren was raised by a schoolteacher who he said fed seven children on a monthly wage of 40 yuan ($6). His father was criticized as a capitalist and at one point was confined in a cow barn.

When Ren was a teenager, the ruling party embarked on the Great Leap Forward, a disastrous campaign to become an industrial power overnight. At least 30 million people died in the 1959-61 famine that followed.

Ren’s mother declared no one would die and divided each meal into nine portions, one for each family member, Tian said.

“All nine people survived,” said Tian. “His mother’s ‘meal system’ had a big impact on him.”

Following that ethos, Huawei says it is owned by the Chinese citizens who make up half its workforce of 180,000. Ren says the company has no outside owners, government or private.

Huawei says Ren’s ownership has declined to 1.14% as more shares were distributed to employees. The Hurun Report, which follows China’s wealthy, says his net worth is still $3 billion, up 25% from 2018.

Ren credits his success to his focus on detail, not his upbringing. He said if he hadn’t gone to university, he could have been a champion pig breeder or run a noodle factory.

“Don’t think that when I was a child, I had a grand ideal. When I was young, my ambition was to have more steamed buns, because we didn’t have enough,” Ren said.

“Poverty didn’t give me the elements for success,” he said. “This wasn’t inevitable.”

After studying engineering, Ren joined the army in the 1960s and was sent to the northeast to build a textile factory. He slept outdoors in weather as cold as -28 C (-18 F).

Ren says he got lucky in the mid-1970s when Chinese leaders wanted to revive technology development after the ultra-radical Cultural Revolution. He built a measuring tool based on a description by a technician who saw a similar device abroad.

“The country was looking for cases to show science and technology were useful, and my gizmo was exaggerated into a big invention,” Ren said.

He founded Huawei in 1987 after his military post was eliminated, putting him on an entrepreneurial path he hadn’t wanted. The company was selling imported telecom equipment when it confronted its first crisis: Its supplier was acquired by a competitor. Huawei went to work developing its own products.

Huawei has one of the world’s biggest corporate research budgets and says this year’s spending will rise 20% to $17 billion.

That has helped to limit the impact of possibly losing access to U.S. components and technology. Company executives say they are removing U.S.-made parts from products but expect smartphone sales to suffer if the company loses access to Google’s maps and other services.

Ren regretted going into telecoms after he saw how brutal the competition was, but he couldn’t afford to start over after spending his family’s savings to set up the company.

He says he has tried to ensure Huawei’s long-term survival through a system of shared decision-making, where a three-member team takes turns in six-month stints as chairman.

Still, he earned a reputation as a forceful, even autocratic, decision-maker. That was highlighted by an internal battle in 2000 that nearly tore the company apart.

“Today’s crisis is one-tenth or 1% of the pressure at that time,” Ren said.

Others wanted Huawei to invest in the personal handy-phone service, or PHS, that was catching on as a low-cost alternative to mobile phones. Ren rejected it as a distraction from a bigger goal of developing third-generation mobile phone technology.

Ren received reports almost daily from managers urging him to support PHS as bills for 3G development piled up. Regulators had been expected to approve 3G as early as 2003. Huawei poured 6 billion yuan ($750 million) into it before the first Chinese licenses were issued in 2009.

“Every time I saw a report, I suffered pain,” Ren said. “Maybe my depression got worse then.”

Tian, his biographer, said Huawei employees told him Ren, unable to sleep, would call and worry aloud about how to pay a 300 million yuan ($50 million) monthly wage bill.

“When Ren Zhengfei talked with employees six or seven years ago, he revealed a secret: He had suicidal thoughts several times,” said Tian, a Huawei adviser and co-director of the Ruihua Innovation Research Institute at Zhejiang University.

DRAGGED INTO THE SPOTLIGHT

Employees used to joke that Huawei was the biggest company no one ever heard of.

Ren didn’t give his first press interview until 2013, a year after the company became a consumer brand by launching its first smartphone.

In 2016, he became a social media sensation when a photo circulated showing him waiting for a taxi at the Shanghai airport, unrecognized by other travelers. Online comments expressed admiration that he avoided private jets and other trappings of wealth.

Since January, Ren has given interviews lasting up to two hours to reporters and TV crews who trek to Shenzhen, a former fishing village adjacent to Hong Kong that has grown into a city of 15 million people and a Chinese tech center. Huawei’s neighbors include Foxconn, which assembles Apple’s iPhones, and Tencent, operator of the popular WeChat social media service.

Ren is known for speaking so bluntly that co-workers say they used to limit his contact with customers. But in public he is even-tempered, even genial.

Despite his daughter’s arrest, he expresses admiration for American society. He avoids criticizing Washington and says he doesn’t want Beijing to retaliate for U.S. sanctions.

Huawei is, along with Nokia Corp. and LM Ericsson, a leader in 5G. It is meant to support self-driving cars and other futuristic applications. But that increased reach makes 5G politically sensitive.

LOOKING TO THE FUTURE

Ren is still CEO but has withdrawn from day-to-day management. He says he has no plans to retire because his only hobby is work. He promotes the company’s management culture and talks over problems with employees who are invited into his office for tea.

Ren has put an unusually strong emphasis on making Huawei self-reliant and creating its own technology, said Peng. She said that sets it apart from companies such as Lenovo, the Chinese maker of computers and smartphones, that use more outside suppliers.

The company has released a smartphone operating system it says can replace Google’s Android if necessary. It makes its own processor chips but still relies on U.S. suppliers for high-end products.

“They do things from scratch,” said Peng. “I think this is the influence of the founder.”

Ren dismisses suggestions Huawei might diminish Western security fears by selling shares to the public and joining a stock exchange.

“There are few examples of public companies that grew big and strong. Capital has to be greedy,” he said. “It is because we are a private company that we have remained very committed to our long-term ideals.”

He acknowledges his daughter’s arrest is far from the first time his family has sacrificed for Huawei.

Ren said when Meng, who uses her mother’s surname, and his other daughter and son were children, he was in the army and away from home 11 months a year. Once he started Huawei, he worked 16-hour days.

“I think my relationship with all of them was not very close, especially with my youngest daughter. As a father, I feel indebted to them,” Ren said. “Of course, maybe after I retire, I will try my best to compensate.”