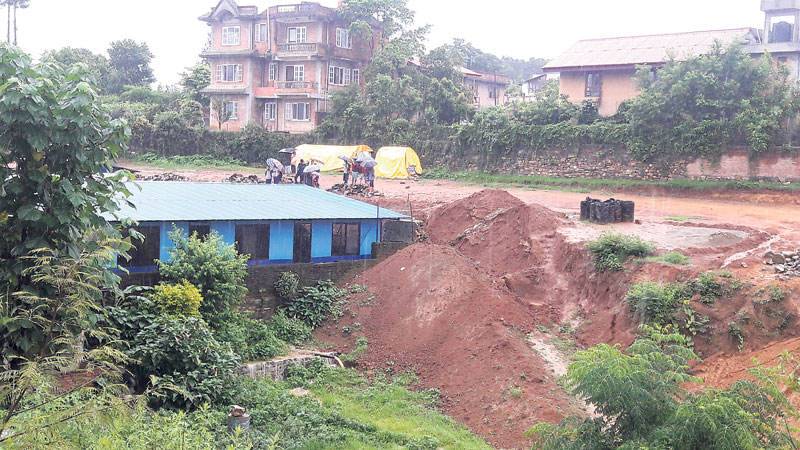 The prefab schoolhouse of Pushpanjali Secondary School, into which an adjoining retaining wall collapsed killing two schoolchildren and injuring 25 others, at Taukhel, Bandegaun, Godavari on Friday. (Pratik Rayamajhi/Republica)

KATHMANDU, July 2: Two students were killed and 17 others injured when  a compound wall caved in at Pushpanjali Secondary School at Badegaun of Godawari Municipality, Lalitpur district on Friday.

The incident has brought to the fore the safety of school buildings in the country. It has raised questions as  to how the school buildings are constructed, repaired and maintained and what role the monitoring agencies play.

There are about 34,000 public and 6,000 private schools across the country. More than 90 percent of private schools are being run in rented buildings, which were constructed for residential purposes. Government schools also cannot be considered fully safe, according to the Guardians’ Association of Nepal (GAN).

“Buildings constructed for residential purposes cannot be considered safe for use by large numbers of students, but more than 90 percent of private schools are run in rented buildings. No agency has properly monitored these structures from the safety perspective,” said Suprabhat Bhandari, president of GAN.

The Ministry of Education (MoE) issued a directive in March, provisioning earthquake resistant buildings for schools within three years, including duel exits and ramps for disabled students.

However, the private schools opposed the directive. “We are unable to comply with the directive within three years,” said officials at the Private and Boarding Schools Organization Nepal (PABSON).

Although most of the school buildings are considered to be in a poor condition, the government has not collected data of how many of the schools are safe.

The earthquake in April 2015 left schools in a still more precarious  condition. The Post Disaster Needs Assessment (PDNA) report estimates the damage to infrastructure and physical assets at Rs 28,063.8million.

As many as 8,242 community/public schools were affected by the earthquake, with 25,134 classrooms completely destroyed and another 22,097 partially damaged, the PDNA report states. Institutional (private) schools also suffered significant infrastructure damage, with 956 classrooms completely destroyed and 3,983 partially damaged. In addition, 4,416 toilets and water, sanitation and hygiene (WASH) facilities, and 1,791 compound walls were damaged.

Most of damaged and destroyed schools are still running their classes in unsafe premises, ie, either in the damaged buildings or in temporary shelters. No government agency has shown readiness to take responsibility for monitoring the situation. Asked about this, Khaga Raj Baral, director general of the Department of Education (DoE) passed the buck to Baikuntha Aryal, spokesman of the department.
Aryal in turn referred the matter to Jhappar Singh Bishwakarma, senior divisional engineer at DoE.

Both government and private schools are yet to comply fully with the building code in the education sector, according to  DoE. DoE assumes that 60 percent of school buildings might be considered partially safe.

As per a sample survey conducted by the National Society for Earthquake Technology, an estimated 40 percent of school buildings are in a critical condition.