House to be revived if govt defers polls: Left alliance 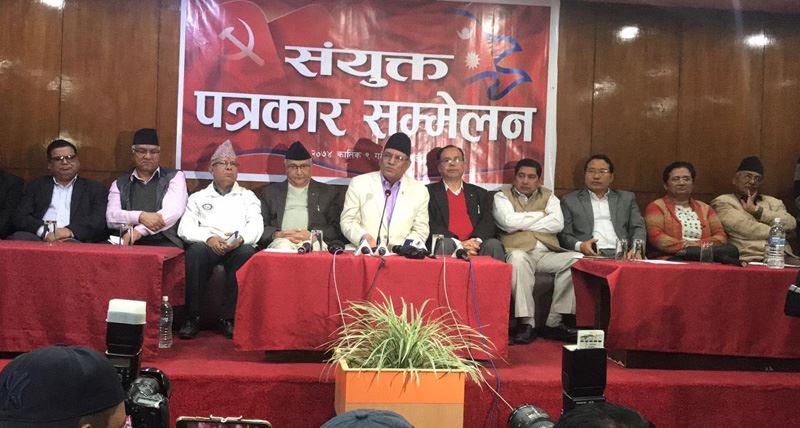 KATHMANDU, Oct 26: A day after the Supreme Court (SC) sought details from the Election Commission (EC) on ensuring that separate ballot papers are being printed for provincial assembly and parliamentary elections, leaders of the left alliance have threatened to reinstate parliament if the November 26 and December 7 polls are postponed under any pretext.

Convening a press meet on Thursday, top leaders from the left alliance, CPN-UML Chairman K P Oli and CPN (Maoist Center) Chairman Pushpa Kamal Dahal, said that any move that could result in postponement of the polls was unacceptable to them.

Dahal threatened to reinstate the House if the government conspired to postpone the polls under the pretext of a ballot paper row. He said any decision by the government, the apex court or the EC causing a poll deferral would only lay the ground for the resumption of parliament. According to him, parliament has only been “stalled and not prorogued”.
“The term of parliament will not be over until  January 21, 2018, so far as the constitution is concerned.  The House has been put off to pave the way for the election process. If the polls are postponed parliament can be resumed as the Speaker had only put off the last House meeting. In the last announcement, she didn't prorogue the House session but only put it off,” said Maoist Chairman Dahal. “We have decided to make our stance clear as we smelt a rat after  yesterday's court decision.”

The alliance leaders said at the press meet they sensed that the government was carrying out some exercises for postponing the polls. “There is no excuse for postponing the polls on constitutional, political, practical or moral grounds as the election process has already been started on the basis of the constitutional deadline and the geographical and climatic conditions of the country,” said UML Chairman Oli at the press meet.

The term of parliament had been ended as per the second line of the same article as the nominations date for parliament elections was scheduled for October 15.
Though the alliance leaders didn't directly mention their motive for a parliament resumption, insiders claim that a resumption of parliament could pave the way for the alliance to change the government and take revenge against the apex court justices through the registering of an impeachment motion in the House. They also believe that the move will be an easy one for the alliance as Speaker Onsari Gharti is from the Maoist party.

“We don't comment on moves we are to make after a poll postponement as we strongly believe that polls can't be postponed. We are just drawing the attention of the authorities concerned through this press conference,” said Oli.  The left alliance warned the court, EC and the government not to make any move toward postponing the polls, stating that any activity affecting the polls would be intolerable to the people.

The warning of the left alliance arrives in the wake of the Supreme Court asking the EC to furnish clarifications making sure the ballot papers for provincial and parliamentary polls are printed separately as per the two separate laws that make it mandatory to do so. The court's move sparked doubts in left circles as the EC is all set to print the ballot papers from Friday for the First-Past-the-Post system,  on the same page but separately.
Both Oli and Dahal expressed doubts over the court order, claiming that the ballot paper was already separate despite being printed on the upper and lower parts of a single paper. Dahal further explained that the design of the ballot paper was finalized unanimously by the government, the main opposition and the EC after a series of meetings.

KATHMANDU, Nov 17: Chiefs of the left alliance parties have assured voters of prosperity in the country once they form a... Read More...