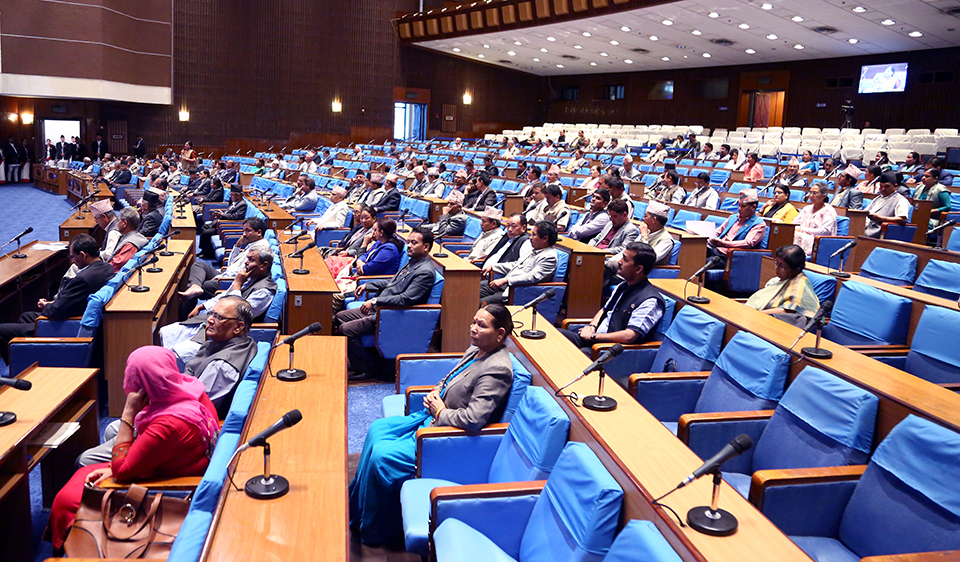 KATHMANDU, Aug 6: A nearly month-long stalemate in parliament ended on Monday after the ruling and opposition parties agreed to a middle way solution in the form of a special parliamentary panel that would suggest ways to resolve similar disputes in future.

With the announcement of a seven-member special parliamentary committee, opposition parties Nepali Congress (NC) and Rastriya Janata Party Nepal (RJPN) agreed to end their obstruction of the House of Representatives that they had been continuing for the last 26 days.

The opposition parties had been demanding the formation of a parliamentary probe into two different incidents of killing by police in Sarlahi district in June. But they agreed on a committee with a different mandate after the government stood adamant against constituting a special probe into the killing of Kumar Paudel and Saroj Narayan Singh.

Paudel, who was Sarlahi district in-charge of Netra Bikram Chand's outlawed outfit, was reportedly killed in a police 'encounter' in June 20, while Saroj Narayan Singh lost his life in police firing after a street protest erupted over the drowning of a minor in a pit left open by illegal sand miners.

Both opposition parties had demanded a parliamentary investigation into the incidents. They accused police of killing Paudel after taking him under their control and of using excessive force that resulted in Saroj's death .

Opposition party leaders have claimed that a decision whether or not to form a parliamentary probe will be taken on the basis on the special committee's report.

The seven-member special committee formed under Rule 177 of the House Regulations will have 30 days to submit its report.

Mahato flays govt for misleading info on his citizenship

Presidium Member of RJPN Rajendra Mahato has sought the government's clarifications over its decision to scrap the citizenship of a person having the same name as himself.

“The government spokesperson said that the cabinet scrapped the citizenship of eight individuals including one Mahato. Many thought this was none other than myself. Media also carried this news in the same fashion,” Mahato fumed in the House meeting Monday.

“Why was it publicized that my citizenship had been scrapped? Isn't it the duty of the government to make such sensitive information public with the necessary details?”

He was of the view that government spokesperson Gokul Baskota should apologize for spreading misleading information and thus defaming him. The media should also stop portraying him as no longer a Nepali citizen, he added.

Here's what leaders have to say after obstruction of parliament proceedings

KATHMANDU, July 31: Leaders of the ruling and opposition parties have expressed differing views on the issue of obstruction of... Read More...