House fails to pass key bills in the absence of lawmakers 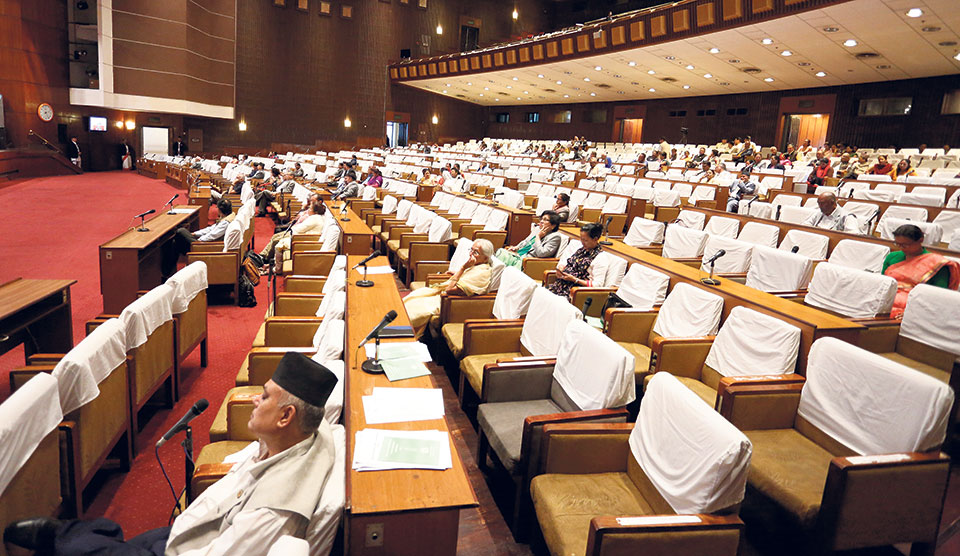 KATHMANDU, Oct 7: House meeting on Friday failed to pass key bills due to lack of quorum as lawmakers remained busy in meetings at securing candidacy for upcoming parliamentary elections from their respective parties.

Parliament was scheduled to endorse seven bills on Friday, but Speaker Onsari Gharti postponed the meeting until Sunday due to lack of quorum after passing just three bills.

It was found that the meeting lacked required quorum when lawmaker Prem Suwal demanded head count of lawmakers when the speaker sought approval to table the fourth bill. When the officials counted the heads, only 110 members of parliament were present whereas there should have been at least 148 lawmakers present at the time of taking any decision in the parliament. As per the parliamentary regulations, presence of at least one-fourth of the total number of lawmakers is mandatory for a quorum. Currently, there are 591 lawmakers in the 601-seat parliament.

Though there was sufficient number of parliaments at the beginning of the meeting, the presence of lawmakers decreased significantly as the MPs left the parliament building one after another.

The speaker also adjourned a House meeting on September 25 when Nepal Workers and Peasants Party lawmakers Prem Suwal and Anuradha Thapamagar accused the speaker of endorsing the bill despite lack of quorum. House meetings were postponed repeatedly in the pat too for the same reason.

Some urgent bills including the bill on election of National Assembly, election of the president and vice president are yet to be endorsed by the parliament with its term expiring on October 21.

There is an urgent need for the parliament to endorse other bills including the bill on duties and responsibilities of the province chiefs, formation of the provincial government before the expiry of its term. But low presence of lawmakers in the House meetings has been posing challenges for the timely endorsement of necessary bills from the parliament as over two dozen bills are still pending in the parliament.

KATHMANDU, Sept 30: The government has tabled three bills related to annual budget that were tabled by the previous government and... Read More...

KATHMANDU, Sept 10: Parliament on Friday failed to endorse three urgent bills, including one for the establishment of seven high courts,... Read More...