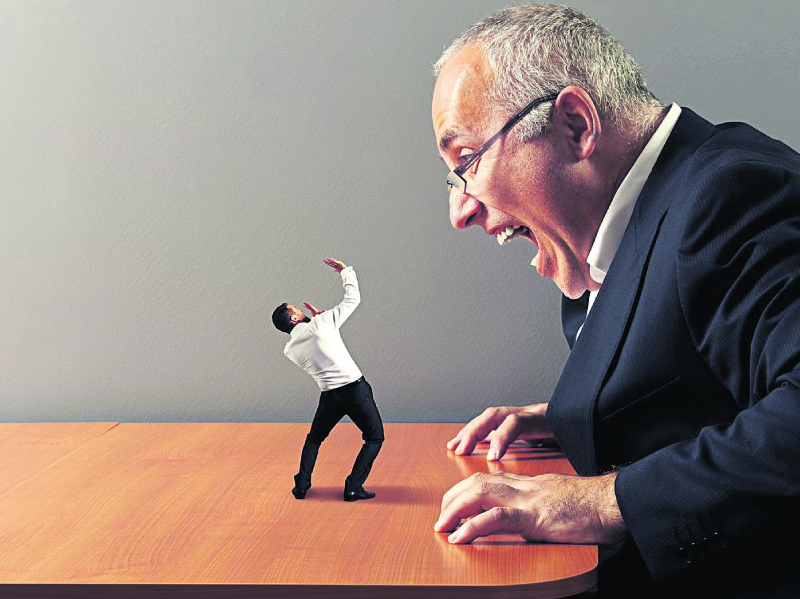 There was a time when I hated going to work. I would get up in the morning, have a relaxing cup of tea and as I flipped through the newspapers that feeling of anticipation and dread would slowly start creeping in. I often found myself wondering what my immediate supervisor would say or do that day that would make me miserable and how I would deal with it. The littlest of things I did or didn’t do would set him off on a tirade. I had no idea what I was doing wrong.

Then one day, I simply realized that it was a personal grudge rather than a professional one. I had gone against his ideas one too many times for him to be able to stomach it any longer. There was no way I could fix this because when someone, especially one with power, decides he/she doesn’t like you, there’s no way you can fight it. At least, that’s what I believe. With no way out, I decided to quit. While I loved every bit of what I was doing, there was no way I could continue.

This unsettled me for a while, and for about two months after handing in my resignation I didn’t look for another job. I wondered if with my self assured nature, I would land up in such kinds of issues everywhere I went. But I couldn’t also just stay at home and do nothing now, could I? So I took up another job and while my current boss and I do have occasional clashes, they aren’t anything we can’t fix because they are strictly professional. When I confided about my previous supervisor with him, he had an interesting insight to offer. He said people who can’t separate the personal and the professional have certain insecurities that you just can’t work around, no matter how much you try. And because no amount of reasoning will ever work with these kinds of people, the scale is tipped in their favor from the start.

I had this conversation with a few of my friends and colleagues as well and many of them had their own stories too. I also spoke to some people I knew who had quit their jobs under strange circumstances and it seems like my experience wasn’t a unique one.

Here are some of their anonymous confessions.

My immediate supervisor started disliking me the day I joined. I think it was because I didn’t call him sir or shower him with over-the-top respect like many others in that department did. He would often find faults in my work but wouldn’t be able to pinpoint what exactly it was. He would simply ask me to redo it. I once had a colleague to submit my idea for an event to him and he was completely bowled over by it. I know for sure that if he knew I had done it, it would have been rejected. Thankfully six months after I joined the organization, he decided to quit. The supervisor I work under now is fair and has a balanced head on his shoulders. He rarely finds faults in my work and when he does he is able to tell me just exactly what he wants me to improve on.

The one who, thankfully, didn’t have to suffer much

I once worked with a power hungry lunatic. She was young and couldn’t believe she had landed an authoritarian position, albeit by default when the head of the department left without notice. She loved being able to tell people what to do and expected people to obey her. The thing was she just loved being in control and took every opportunity to brandish that. Once I told her I had a medical checkup so would be taking the first half off and she lectured me for half an hour about the importance of being professional and not telling my personal life hamper work. As if I had any choice on that matter. But being clueless about the job she was supposed to be doing, she got a lot of flak from her supervisor as well and got into numerous quarrels with him. She took this out on her team so often than a few of us went and complained to the higher-ups and, after a while when things got a little out of hand, she was asked to leave.

The one who almost went crazy

The thing with bad bosses is that nothing will change their behaviors so it’s futile to even try. In my two-decade-long marketing career, I have worked with some pretty difficult people. There were ones who were simply illogical and wouldn’t understand reason, ones who favored certain people over others, and also those who just barked orders and expected the heavens to heed to their demands right then and there. Bad bosses are a boon for those who follow the norm and don’t question authority but for those who like to think outside the box and challenge the status quo, they are nightmares. Your life will become a living hell if you don’t conform but conformity isn’t a virtue of those who have their own ideas and opinions. I was a senior marketing manager once at a reputed organization and when a junior officer started sucking up to the head of the department, he was preferred over me for many projects and soon got promoted despite his clear lack of expertise and knowledge. The sad thing is that, even today, many organizations run on this system of flattery and nepotism.

What I’ve realized in my eight years of being in the workforce is that people in power rarely like to be questioned and challenged. Because when someone does that it means they don’t take everything a person with authority says as the final word. If a person in a leadership role accepts criticism and can defend his stance without belittling his team, that person is a true leader. I have only met one such person till now, and I really looked up to him, as did our entire team. This person would actually listen to you, even if you were just interning in his department, and consider your ideas and solutions. If he had to turn them down, he would explain why. This isn’t how my other bosses have behaved. Most of them have just shouted orders and expected people to carry them out without question no matter what. And they have also been very good at looking down on their teammates and thinking that only they run the entire show, and the rest are just mere pawns. For me, their inflated sense of self was very hard to get past, and also funny at times because they would invariably end up looking like fools. There was a supervisor who would ‘correct’ other people’s ‘mistakes’ when there was nothing to correct and actually ruin a well-done job. When his bosses scolded him, he would actually try to pin the blame on his team. The job market today is filled with people like these. Organizations don’t invest in good people, they only invest in people who butter them up, and these kinds of people have zero confidence in their abilities and they try to cover up this insecurity by being rude and boosting their egos.

The one who believes there is still hope.

My horrible experience with immigration at TIA

I was traveling to China in 2017 with my business partner on some business. At the Tribhuvan International Airport, the... Read More...

Cox, 52, spoke out during an expedition with outdoor adventurer Bear Grylls in the Irish highlands, in which the pair... Read More...