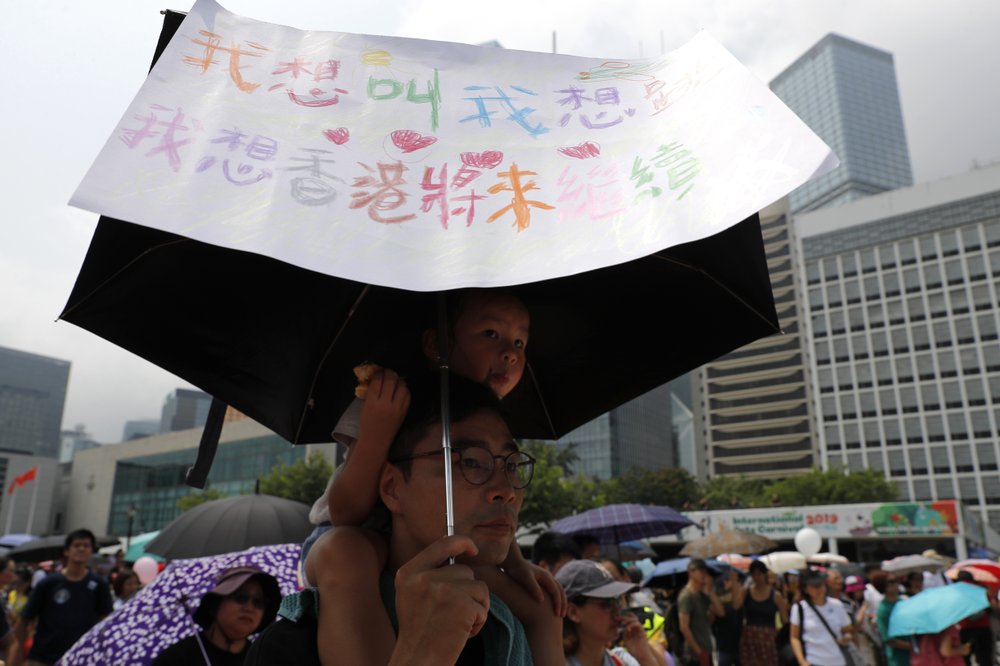 A child takes shelter near a sign that reads "I want to shout, I want to jump, I hope Hong Kong's future will continue" during a march billed as "Save our Children" in Hong Kong on Saturday, Aug. 10, 2019. China's central government has dismissed Hong Kong pro-democracy protesters as clowns and criminals while bemoaning growing violence surrounding the monthslong demonstrations. (AP Photo/Vincent Thian)

HONG KONG, Aug 10: Another weekend of protests in Hong Kong began Saturday with a rally of parents calling for greater protection for their children as ordinary people have increasingly become caught in skirmishes between anti-government demonstrators and police.

Hong Kong is in its ninth week of mass, city-wide demonstrations. Police issued letters of objection to applications for two rallies Saturday, but they are still expected to go ahead.

The city’s pro-democracy protest movement began in June against an extradition bill that would have allowed Hong Kong residents to be sent to mainland China to stand trial. Opponents said the bill would have eroded Hong Kong’s hallmark judicial independence and exposed its residents to politicized cases.

Since the government suspended the legislation, however, protesters have broadened their demands to include electoral reforms and an independent inquiry into alleged police abuse.

A former British colony, Hong Kong was returned to China in 1997 under the framework of “one country, two systems,” which promises it certain democratic freedoms. In recent years, however, some in the semi-autonomous city feel that the Communist Party-ruled central government in Beijing has encroached on their rights.

Beijing has condemned some protesters as violent radicals spurred on by foreign forces bent on containing China’s development. In turn, protesters say police officers have used excessive force and ignored calls for help when thugs attacked civilians in a commuter rail station.