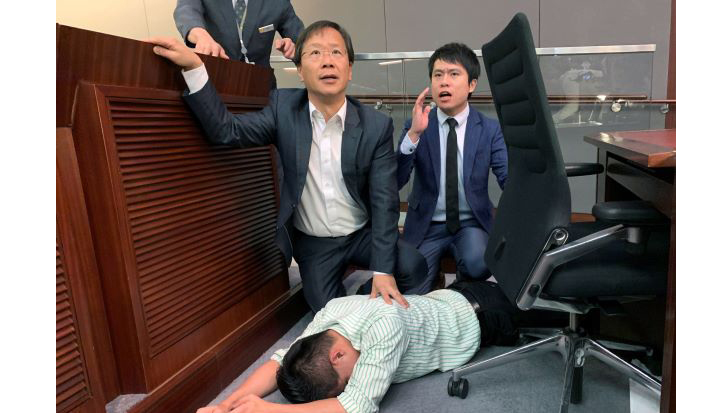 HONG KONG, May 11: Scuffles broke out in Hong Kong’s legislature on Saturday between pro-democracy lawmakers and those loyal to Beijing over an extradition law that will extend Beijing’s powers over the financial hub.

One person was taken to hospital.

The former British colony is trying to enact rules that would allow people accused of a crime, including foreigners, to be extradited from the city to countries without formal extradition agreements, including mainland China.

Opponents fear the law would erode rights and legal protections in the free-wheeling financial hub - freedoms that were guaranteed when it returned to Chinese rule in 1997.

Tempers boiled over when pro-democracy lawmakers and the pro-Beijing majority tried to hold separate hearings on the bill.

Scuffles erupted and lawmakers clambered over tables, cursed one another and piled into each other as security personnel tried to maintain order.

One pro-democracy lawmaker, Gary Fan, fell heavily and had to be stretchered off to hospital. Several pro-Beijing lawmakers also fell, with one appearing later with his arm in a sling.

“We laughed at Taiwan’s legislature in the past, but Hong Kong’s is even worse,” she told reporters.

The bill is the latest lightning rod for Hong Kong people worried about Beijing’s powers over the city that was promised a high degree of autonomy under a “one country, two systems” formula when it returned to Chinese rule.

More than 130,000 opponents of the bill marched against it two weeks ago, while several thousand gathered outside the legislature on Friday night to demand it be scrapped.

Even Hong Kong’s normally conservative business community has expressed opposition. The International Chamber of Commerce in Hong Kong, said the bill had “gross inadequacies” and would put people at “risk of losing freedom, property and even their life in future on being surrendered”.

Hong Kong’s Bar Association has said the law lacked sufficient safeguards for individuals to face a fair trial in mainland China and it noted difficulties in validating any evidence put forward by Chinese authorities.

The United States weighed into the controversy this week when a U.S. congressional commission said the law could extend China’s “coercive reach” and create serious risks for U.S. national security and economic interests in Hong Kong.

The U.S. commission even said U.S. navy might have to stop visits to Hong Kong.

Hong Kong leader Carrie Lam has insisted on the need for arrangements to extradite offenders to China and Taiwan, an island Beijing claims as its own, and other countries that don’t have extradition treaties with the city.

She has cited the case of a Hong Kong man who allegedly murdered his girlfriend in Taiwan last year, and who has since fled back to Hong Kong, as a major reason for rushing through the legislation with minimal public consultation.

Yet Taiwan authorities have since said they opposed Hong Kong’s extradition bill, and won’t agree to an ad hoc extradition arrangement for the murder suspect even if the bill was passed.

Hong Kong’s opposition democratic lawmakers hold less than a third of the seats in the city’s 70-seat legislature, meaning they can’t veto the legislation when it goes to a final vote, possibly in weeks.

“We will make use of all the rules of procedures to delay the legislation as much as we can,” said Democrat Lam Cheuk-ting.

Some activists have called for more street protests.

Crisis over Taiwan could wreck China’s relations with the US and many of its neighbors and rock an already shaky... Read More...

SEOUL, Dec 29: To judge by the stream of extraordinary images on the Korean Peninsula, you might think 2018 marked... Read More...