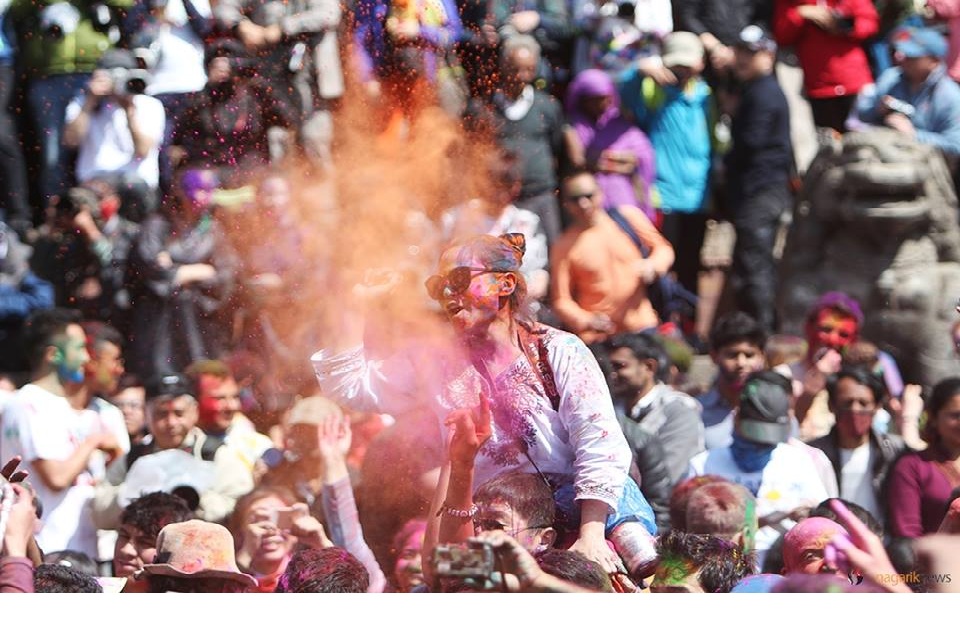 KATHMANDU, March 1: The Holi, which is also known as the festival of colors, is being celebrated with much fanfare across the country on Thursday.

A legend has it that fire-resistant Holika put herself along with her son Prahlad in fire for his religious devotion to god Bishnu. However, her son Prahlad remained unharmed while Holika got destroyed in the fire for inflicting injustices on her son. Since then the Hindus have been celebrating Holi as the triumph of justice over injustices.

This festival is celebrated today (Thursday) in the hills and on Friday in the Tarai region. The government has also given public holiday on the day of Holi.

It is also believed that the festival promotes social harmony, integrity, goodwill, mutual cooperation in the society.

President Bidya Devi Bhandari has extended her best wishes to all Nepali people on the occasion of Fagu Poornima-2074 BS.

In a message of best wishes delivered today, President Bhandari said that the festival has helped in maintaining social harmony among all Nepali people and keeping the national unity.

While noting that all Nepali people celebrate this festival with fanfare in the country which is the epitome of ethnic, religious and cultural diversity, President Bhandari wished that the great festival may bring happiness and excitement among all the Nepali people.

The President also wished that the festival may encourage us to keep the unity, harmony and tolerance among all Nepali people intact.

Vice-President Pun expressed his confidence that the festival would inspire all Nepali people to be a part of the mega campaign of building prosperous country with the socio-economic transformation of each Nepali people.

Prime Minister KP Sharma Oli has expressed his best wishes to all Nepalis at home and abroad on the occasion of Fagu Purnima.

In a message today, the Prime Minister has expressed his confidence that the Holi festival would play vital role to promote goodwill among Nepalis.

PM Oli has also wished for excitement and happiness to all Nepalis by Fagu Purnima. "May this festival support to promote brotherhood and closeness to the Nepalis of all communities," PM Oli said in his message.

KATHMANDU, Aug. 18: The tagadharis or those who wear the 'Janai' (the sacred thread) around their bodies from the left... Read More...

KATHMANDU, Aug 7: Hindus are observing the Nagapanchami festival today as per the time-honored tradition. ... Read More...