HELSINKI, May 5: Sporting a black leather jacket, dyed red hair and a tattooed arm, Alisa Aarniomaki looks like she’s on her way to a rock band rehearsal session. But instead of carrying a guitar, the 20-year-old Finn gently holds on to something else: a puffy stuffed horse head on a wooden stick complete with glued-on eyes, mane and reins.

She’s been riding real horses from the age of 10 but became instantly smitten by hobby-horsing -- a sport with gymnastic elements that has spawned a social media subculture among Finnish teen girls -- when she first heard about it on a web discussion forum several years ago.

“Hobby-horsing has a strong therapeutic side to it,” says Aarniomaki, adding that it has helped her to deal with difficult personal issues such as her parents’ divorce and bullying at school.

“I’ve gone through lots of trouble and I’m still struggling with some issues. It has helped me a great deal that I can occasionally just go galloping into the woods with my friends. It somehow balances my mind.”

Like a real horse and its rider, the hobbyhorse and its master form a team and become attached to each other. Similarly, the sports simulates traditional equestrian events including competing in dressage and show jumping, and is physically demanding.
Hobby-horsing has gained momentum outside Finland because of this year’s release of the documentary “Hobbyhorse Revolution” by the Finnish Oscar-nominated director Selma Vilhunen. Over a year, she followed young hobbyhorse enthusiasts and their preparations for a competition.

Some actual horse riders may look down on hobby-horsing as childlike past-time not suitable for anyone aged over 10, but Fred Sundwall, the secretary general of the Equestrian Federation of Finland, disagrees.

“We think it’s simply wonderful that hobby-horsing has become a phenomenon and so popular,” Sundwall said. “It gives a chance to those children and teens who don’t own horses to interact with them also outside stables and riding schools.”

The vast majority of the hobbyhorses are homemade -- splendid, colorful creatures complete with names like Chattanooga Choo Choo and Panda -- exchanged and sold by owners at events and through social media. Some of them have been known to fetch up to 200 euros ($218 dollars) at auctions.

Aficionados take high pride in the sport’s do-it-yourself attitude, and very few industrially made hobbyhorses are seen at events because they are “lower-caste horses,” said Venla-Maria Uutela, a spokeswoman for a registered informal hobbyhorse society in Helsinki.
About 10,000 people, nearly all of them between the ages of 10 and 18, are estimated to be involved in hobby-horsing in Finland. Its popularity is also growing steadily in the other Nordic countries and elsewhere in Europe, though the numbers are much smaller.

No official statistics exist as hobby-horsing doesn’t have an affiliation with Finnish sports associations and enthusiasts meet and exchange views mainly at web discussion forums and share photo material and videos through Instagram and YouTube.

Regional competition events are arranged and organized by volunteers throughout Finland, culminating in national championships every year. This year’s main event took place late April at a packed sports hall in the vicinity of Helsinki, attracting an estimated 1,000 spectators to watch about 200 participants competing with their hobbyhorses in several subcategories.

“It’s very bizarre for other people to see, for the first time especially, this kind of stuff,” said Taija Turkki, an 18-year-old hobbyhorse coach from the southeastern town of Lappeenranta. “Because they think we think the horse is alive, which we do not. We understand that it’s dead, made of fabric and all that.”

Lack of strict rules and pompous ceremonies, strong social media presence and female bonding are a big part of the attraction for the young women. “Freedom to create and imagination are key aspects into why people start hobby-horsing,” says Aarniomaki, a hobbyhorse veteran who doesn’t compete actively anymore but is keen on organizing related events such as a recent hobbyhorse parade through the streets of Helsinki.
Female empowerment and girl power are something Alisa Aarniomaki thinks are clearly attached to the sports. “I think hobby-horsing has a feministic agenda,” Aarniomaki said, after having judged competitions at the national championships. “No boys are coming and saying what we need to do, or bossing around. So I think there is some sort of a (feministic) point.” 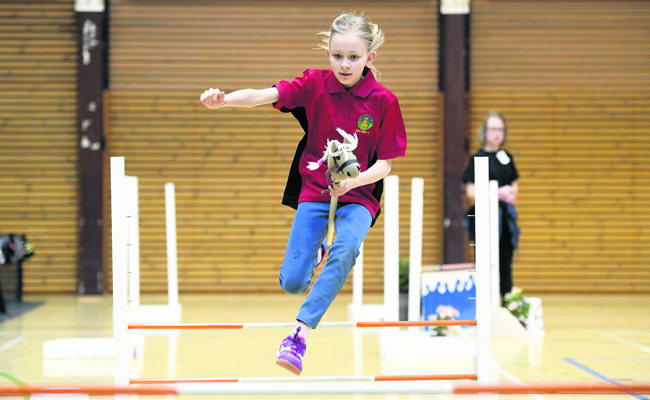 POKHARA, Feb 18: Dance is a form of art where dancers express themselves through their bodies. Life would have been boring... Read More...

KATHMANDU (REPUBLICA): Finland has agreed to provide 20 million eruos to Nepal to support the implementation of the school sector... Read More...