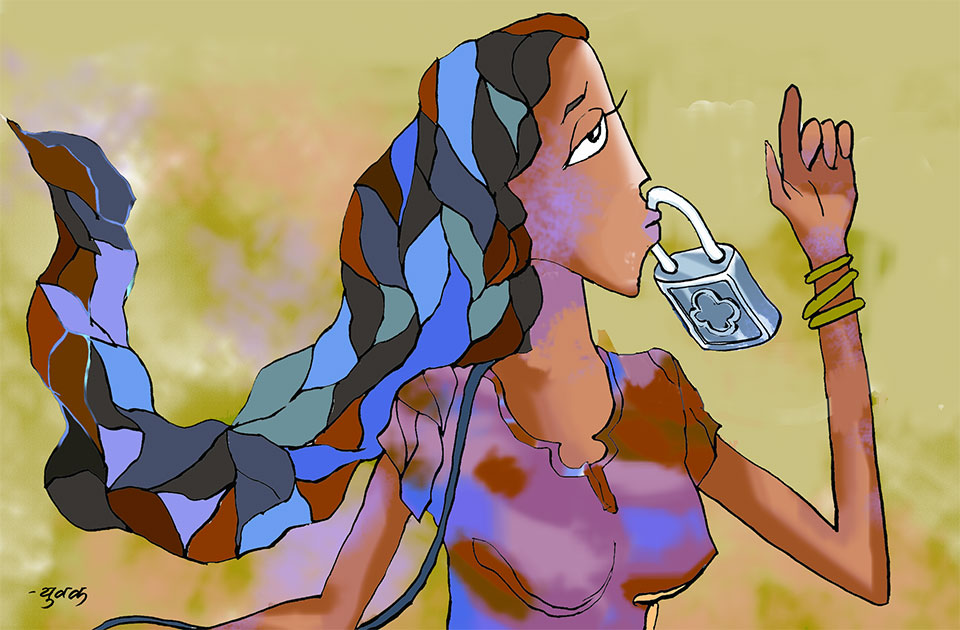 ACHHAM, Feb 10: Parwati Pariyar of Accham has known struggles since a very young age. Married at a young age, her husband left her soon after marriage. Not only that, he left her infected with HIV/AIDS.

Poor financial background and a child born with the infection always keep her worried. Let alone taking medications for HIV, Pariyar (name changed) at times struggle to feed herself and her child. There are days when she has to sleep with empty stomach. But that has never let her down.

Despite the hardships, she travelled to the district headquarters Mangalsen with the hope of finding work. She didn’t hesitate to work as a porter for some time to feed herself and her daughter. She finally got a stable job in a hotel as a dishwasher. Her employer agreed to pay her Rs 5,000 per month.

Although she did not report her HIV status to the employer, he came to know about it through some customers. Fearing that public knowledge of his employee having HIV might bring down the business, he fired her within four days of starting the work.

“He told me that he won’t be able to keep me in the job because I was infected with HIV,” she recalled. The happiness that she experienced after getting the job faded in no time. She was completely broken.

“After four days of work, I was fired without any monetary compensation. It completely made me lose hope of living,” she said. The incident also triggered suicidal thoughts in her.

Pariyar was saved from suicidal thoughts after meeting other HIV-infected persons who were working for welfare of HIV-infected women. She listened to their talks, which made her change her mind about committing suicide.

Ganga Thapa, leader of the group working for welfare of HIV-infected women, said, “I felt sad after listening to Pariyar’s plight. We then arranged a dish-washing job for her in another hotel. This time, the employer was informed about her HIV-infected status.”

Thapa, who has been working for the rights and welfare of HIV-infected women since the past 12 years, has known the plights faced by numerous women infected by the disease. According to her, many women who get HIV from their husbands are forced to live undignified life.

“They are living a very difficult life. Their societies don’t accept them and they fall victim of hate and discrimination every now and then,” Thapa added.

The government has made ARV medicine freely available for HIV victims. However, as many of the victims are living in extreme poverty, intake of medicine has weakened their body further in lack of nutritious foods. Likewise, increased physical work to earn money also make their body further weak.

“Many of the infected women don’t have assurance of meals. If they manage to eat something in the morning, they have to worry about the evening meal. Sometimes, they have nothing to eat so they take ARV drugs only with water,” added Thapa. This has further damaged their health. While many have lost their lives, some are living a miserable life in lack of treatment and good care.

Especially the women living in rural parts of the country have to go through a lot of ordeal. After the death of their husbands, they have to deal with the harsh treatment from society. Though some of them dare to speak about their infection, most of them keep suffering in silence. People with HIV are treated as untouchables. They are deprived of various rights.

According to Thapa, people always try to run away from HIV infected people because they think it can be transmitted even when they stand in front of them. There are various myths and misconceptions related to HIV, which further victimize the patients. Not just the society but even their own family members don’t treat the patients properly.

Though patients are told to eat nutritious diet along with medicines to keep their immunity strong, they hardly do so. When it comes to single women, they are the ones who suffer the most.

Despite their illness, they are obliged to perform back-breaking tasks in order to earn money for a living. “It’s hard for them to manage medicines when they hardly mange two square meals,” said Thapa.

Twenty-three years ago, Thapa lost her husband to HIV. After his death, she experienced a life of hell. “My son was not allowed to go to school because he was HIV infected,” she laments.  She remembers how she was not even allowed to stay in Chhaupadi hut with other women during menstruation. This is the reason why most HIV infected people don’t like to open up about their infection.

This problem is rampant in rural areas and especially in the villages near the border from where the husbands go to India and abroad for generating income and return home with HIV. But it’s their innocent wives who are victimized later.

According to data maintained by the District Coordination Committee, Accham has around 1,500 HIV infected persons.