Highlights of Nepali sports in 2018 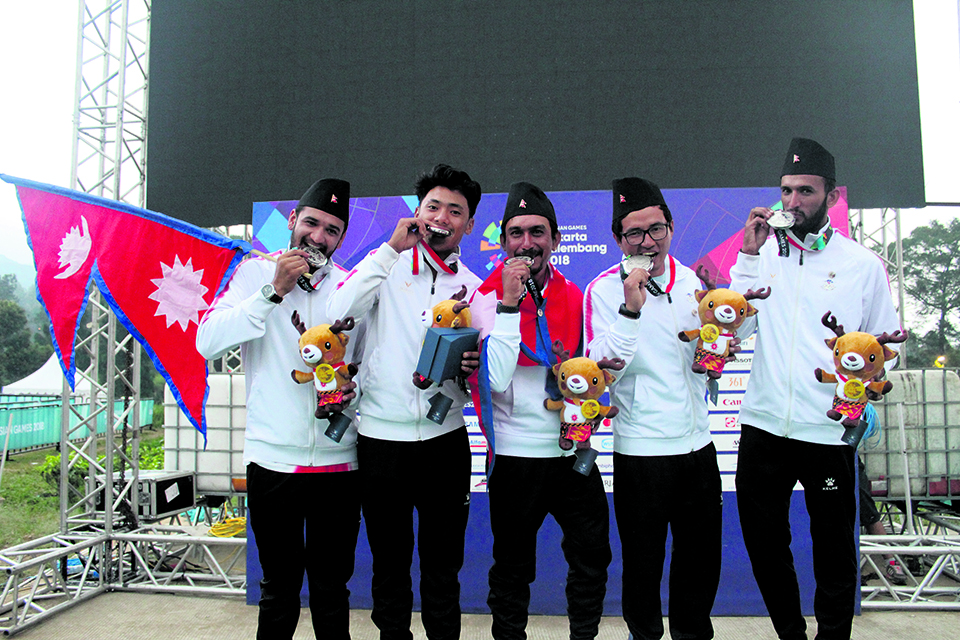 KATHMANDU, Dec 31: The year 2018 was a memorable year for Nepali sports, with bodybuilder Maheshwor Maharjan clinching the first ever international gold medal in body building for the country, and Nepali paragliders bagging first silver at the Asian Games after 20 years of the country’s participation in the Asian jamboree.

Here, Republica takes a look at the sporting highlights of 2018:

Maheshwor Maharjan won a gold medal in the 10th World Body Building and Sports Championship held in Chiang Mai, Thailand, from December 11 to 17. He became the only Nepali player to win a gold medal in an international event. He won the medal in 75 kg weight category.

Maharjan had already won a gold medal in Asia when he claimed the medal in the 50th Asian Body Building Championship held in Bhutan in 2016. As far as now, Maharjan is the only Nepali player to win two international level gold medals in Nepal’s history in body building championships.

Nepal wrote history by winning a silver medal after 20 years of its first participation in the Asian Games. It stood second in the paragliding event at the 18th Asian Games. Nepal won the accolade after the end of the fifth round of the men’s team cross-country event.
Nepal completed the 14-kilometer task only behind Japan, the gold medalist, on the last day of the category.

Nepal finished as the champion in the Asia Cup Fourth International Karate Championship held in Mumbai of India on December 23, clinching 20 gold medals.
A squad from the Sports Science Academy of Nepal represented the country in the tournament. They won 20 gold towards Kata and Kumite and two silvers.

Nepal national football team defender Rohit Chand helped his team Persija Jakarta win the Go-Jek Liga 1 title in Jakarta, Indonesia on December 9. He was instrumental for Persija in the title win as he played 31 out of the 34 matches for the team scoring three goals. Not just that, he also won the ‘most valuable player’ of the tournament.

Nepal number one female golfer Pratima Sherpa’s documentary about her life struggles was premiered in New York, the United States.

The 18-year old Sherpa, who went to the US for the documentary premier, took full advantage of the opportunity to meet American golf superstar Tiger Woods on April 25. She also got a chance to train with Woods for half an hour at the Medalist Golf Club in Florida.

Nepal organized the Paragliding Accuracy World Cup for the first time in its history after commercially starting the game in Pokhara nearly 20 years ago. The tournament was held from November 1 to 4.  Korea won the tournament, while Nepal finished eighth.

KATHMANDU, Jan 1: The Sixth Nepali Topi Diwas or the Nepali Cap Day is being celebrated with gusto. ... Read More...

Lalitpur DAO suspends all but essential services
8 hours ago
Residents can install EVs charging units for their personal use: NEA
7 hours ago