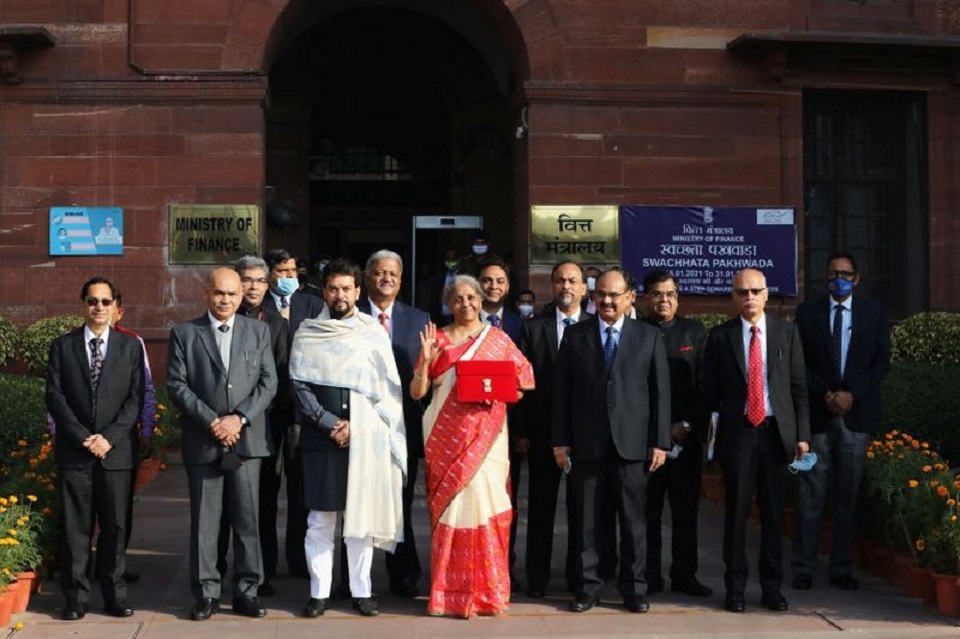 India's Finance Minister Nirmala Sitharaman (C) stands next to Minister of State for Finance and Corporate Affairs Anurag Thakur (3rd L) as she leaves her office to present the federal budget in the parliament in New Delhi, India, February 1, 2021. REUTERS/Anushree Fadnavis

NEW DELHI, Feb 1: Indian Finance Minister Nirmala Sitharaman on Monday unveiled the budget for fiscal 2021-22, that aims to shore up an economy badly-hit by the novel coronavirus pandemic.

The economy is projected to contract 7.7% in the current fiscal year, although the government forecasts growth of 11% for the coming fiscal year, after a massive COVID-19 vaccination drive and a rebound in consumer demand and investments.

These are the initial highlights from Sitharaman’s fiscal 2021-22 budget speech:

* India to launch new federal health scheme with outlay of around 641 billion rupees ($8.80 billion) over the next six years

* Set up asset reconstruction company to take over toxic assets

* To allocate 2.87 trillion rupees ($39.40 billion) for clean water supplies over the next five years

* To allocate 3 trillion rupees ($41.10 billion) for power sector for next five years

* To double ship recycling capacity by 2024

* Allocates 1.18 trillion rupees ($16.17 billion) for ministry of roads and highways

NEW DELHI, July 5: India on Friday unveiled a budget aimed at boosting infrastructure and foreign investment, the first since the... Read More...