Here's what leaders have to say after obstruction of parliament proceedings 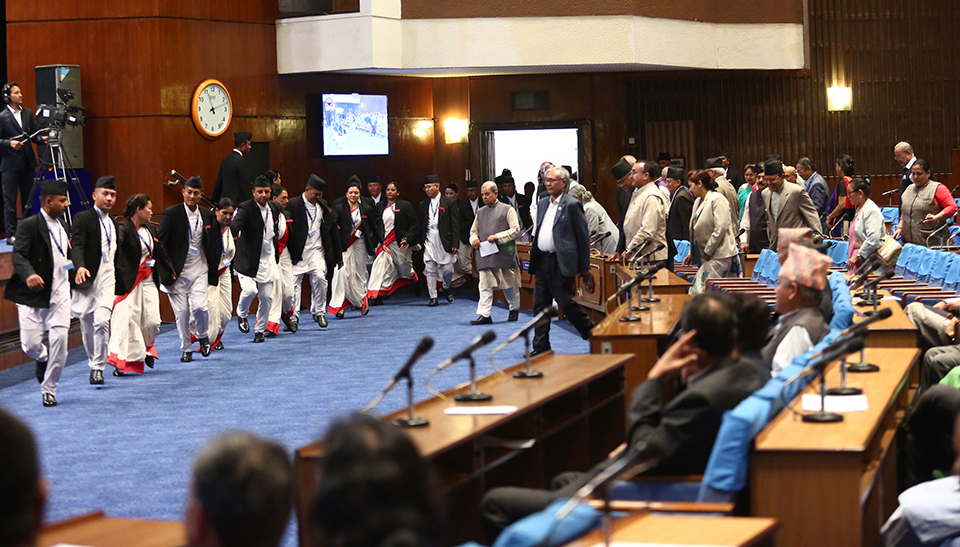 KATHMANDU, July 31: Leaders of the ruling and opposition parties have expressed differing views on the issue of obstruction of the parliament proceedings on the second day over the issue of Sarlahi incident.

Speaking at the parliament premises at Naya Baneshwar following the House adjournment, deputy leader of the Nepal Communist Party (NCP) parliamentary party, Subas Chandra Nembang said the government has made its best efforts to resume the stalled parliament business. He said three or four rounds of meetings have been held to resume parliament proceedings since the opposition lawmakers' protest the day before yesterday.

"I discussed the issue with the Speaker yesterday as well. Prime Minister is also in the know of all these affairs. But this issue has not been resolved so far. Whether or not it would be appropriate to form an investigation committee on a matter 'taken up' by the State Affairs Committee? There are many questions like this," Nembang said.

He said he felt whether it is suitable to form an investigation committee on a matter that has already been settled in agreement with the parties in the district. Chief Whip of the Nepali Congress parliamentary party, Bal Krishna Khand said the government and the Speaker not paying any heed to the demand of the opposition parties to form an investigation committee to look into the Sarlahi incident has raised doubts whether they (government and the Speaker) are trying to cover up the killing incident.

"The citizens should get to feel a sense of security from the government and the government should protect the citizens. We have been fighting for this very cause," Khand said. Nepali Congress lawmaker Gagan Kumar Thapa said the House could not resume its business unless a parliamentary investigation committee was formed to look into the Sarlahi incident although the government has given clarification regarding that incident.

RJP leader Rajendra Mahato expressed objection saying the voices voiced in support of the rights and welfare of the people in parliament were not being heard by the government and the parliament. He also called on the government to make public the report submitted by the Lal Commission.