Helping kids get a head start 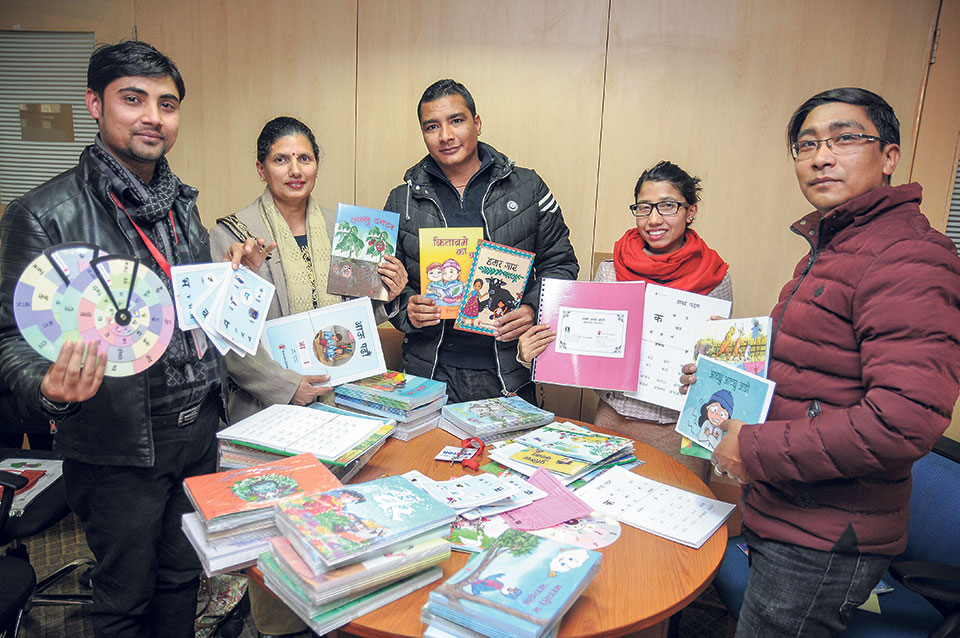 The last six months has seen the efforts of 38 illustrators and 54 contributors from different communities bring out children’s books in their respective languages. The initiative has been funded by Disney Marvel Under Marvel Heroes Act Supporting Education and carried out by Save the Children here in Nepal.

Uddab Bhattarai, who has been overseeing the project, shares experiences of hosting workshops for the contributors and recalls having 100 plus participants. Right now, Bhattarai has 72 illustrated books for emergent and early grade readers (age three and above) all ready to be distributed. What’s more, these books aren’t only in Nepali but in Maithili, Tharu, and Awadhi as well.

“Our research not only shows limited reading and learning resources for this age group, we also know that, compared to other parts of our country, children in Tarai aren’t fluent in reading,” explains Bhattarai adding that it gave them a reason to pursue the project. The Week talked to some of the contributors about their experiences.

I did question whether we as Nepali writers could effectively teach aspects of writing and storytelling to participants of a completely different language. For instance, even if it was only Maithali, we understood very little of it and were even less aware about their culture.

But this experience helped prove that language isn’t a barrier. Literary skills and knowledge can be passed down despite differences in language. And one of the main reasons for this was our participants’ enthusiasm towards the project. They told us that they had never hoped for this kind of assistance to publish children’s books in their own native language.

It underlines the importance of initiating these projects. Even if you are somebody who writes in Nepali, you can encourage writers from other languages as well. It would have been a mistake if we had let language barriers stop us. As we went about it, it was clear that the community only needed a push.

Giving culture differences the spotlight
The five-day workshop always began on a bit of an awkward note. Even though we started by briefing them on goal of the project, we would have to keep repeating ourselves that we wanted their places, food, dress, language, and culture to be the center piece.

We would keep telling them that they didn’t have to worry whether a child in Kathmandu could relate to their storyline. We would walk around and encourage them to put local aspects in their plots and characters. It took some time but, once they got the hang of it, it turned out to be a real learning experience for us as well.

Once a participant who had mentioned her local cuisine in her book even went to the fields to pick the specific ingredients and cooked it for us. She did all that during a break time. She later explained that she just wanted us to see and experience what she had written. In this manner, there was a lot of give and take during the workshops.

When you are making illustration for kids, it automatically becomes more challenging.

The younger the reader, the more you have to work hard. Children are like blank slates, as illustrations we are have the ability to give them information as well as knowledge. For this project, we considered the age of the reader before starting on with the characters and choosing the style of art.

This is important because, as illustrators, we have to cater to the specific age group’s sentiment, need, interest, psychology and also consider their development requirements. We need to map the character with all these factors in mind. All this obviously takes time. I also like to present multiple options because the illustration isn’t our decision alone. The editors and the writers have equal say on the matter.

Children always have many questions when I show them the books I worked on.

As an illustrator working on children’s books, I think spending some time with children is incredibly helpful. Almost 15 or 16 years ago, I used to teach arts and handicraft to kids and I learned a lot from the experience.

To begin with, just seeing the amount of attention and interest they give to illustrations is amazing. You realize how you have the power to attract them to any story. Children also tend to have a lot of opinions. I like to read my books to them whenever I can and questions like how and why in every page is almost inevitable. Sometimes, they even argue that I should have drawn the character or presented the story in a different way. They share their ideas as well and that is always charming.
With this project, since there were different cultures being represented, we had to do a lot of research as well. We have used different art forms as well, from simple cartoon to fantasy influences. I can’t wait to see the kids’ reactions.

Yashu Shrestha, writer and editor
Children need to see themselves reflected in the stories that are in their books.
Whether it is about encouraging Nepali children with their reading habits or helping Nepali parents realize the importance of buying their kids more books, being able to relate to the stories can play a big role. When children can see themselves or their community reflected in the books, they become more responsive to learning and literature in general. This is something our educational system has always neglected.

The books we have are published with the aim to correct this. Personally, I did it to make children around our country feel more represented in our books. It was tricky working on them in all these different languages. For example, I used to work at nights and, since some of these languages were somewhat unfamiliar to me, I had to frequently consult their language experts on the phone and make changes accordingly.

In another case, we also have books with lead characters that are differently abled as well. We had to make it a point to encourage the right participants to write about them. But it was about time we put in this kind of little extra efforts to help make reading an inclusive experience for our children.

Having worked with blind children and colleagues, I’m most thankful for the project coming out with braille books as well.

It isn’t easy to put out braille books in Nepal. It probably takes the total cost of 10 regular books to bring out one braille book. Braille specifically catering to children and their development needs is unheard of here but I’m glad this project decided to go with it.

This was bit of a last minute decision but once we decided to put some of the stories in Braille as well, we first started with the selection process. I have blind colleagues as well as interaction experiences with blind students in their classrooms so they asked me for some assistance here.

We needed to choose stories that would play out well in braille as well as ones that would best benefit them. We wanted to make sure that these books would be of use so we have selected 10 stories from the lot. Again, it is all about inclusion.

KATHMANDU, September 11: Government has decided to provide passport to the children of Non-Resident Nepali who are born in foreign... Read More...